This is Part 2 of a 3 part series on a recent trip through the Okefenokee Swamp. Click here for part 1.

It is amazing how tired one can be after a day of paddling. Last night, we both were in our hammocks about 30 minutes after sunset, when we were suddenly bombarded by mosquitoes. For a while, I tried to read, but found myself falling asleep to the sound of night, frogs croaking and insects singing. The most bothersome insects, mosquitoes, were just inches away, on the outside of the hammock’s netting. I wake only one during the evening, to find my left arm pressed against the netting. Several mosquitoes had already feasted upon me through the net. The next time I wake, it is getting light. I hear the mating roar of a few alligators around the edge of the lake. They sound like someone trying to start a two cycle engine, such as an old boat motor or a chainsaw.  I get up. With long pants and a long shirt and a little repellant, the mosquitoes aren’t too bad. I decide to fish a bit while Gary slept in.  There were only a few open places around the hammock where I am able to drop a popping bug on a fly rod.  After a few casts, a fish rises for the bait, but doesn’t take it and soon, I have an alligator friend, a small dude about four feet, watching me. Knowing what I’m doing, like a good friend, he’s ready to help me take any fish off a hook without me getting my hands all slimy. Sadly, for him, I don’t have another bite and, when I put my rod away and began to make breakfast, he heads back under the lily pads in search of his own breakfast.

With only a little over ten miles to paddle to the next platform at Big Water, we take our time getting ready. The morning is gray with a light breeze. As soon as the sun rises, the mosquitoes mostly disappear. We enjoy a breakfast of oatmeal and coffee, finish drying out our clothes from the day before, and pack up. At ten, we leave the platform and paddle toward what we thought was the exit from lake only to find that we’ve missed it. In the high lily pads, it takes us several attempts to find the narrow channel that leads us back to the red trail. As it was with the last five miles the day before, we are often paddling through lily pads that are high and require and extra effort to push our boats through. It’s exhausting work and soon I’m sweaty. 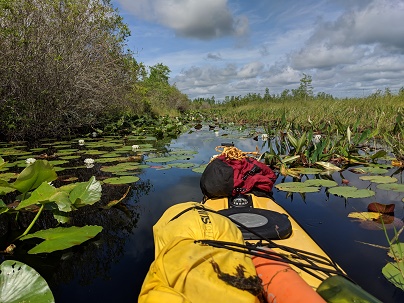 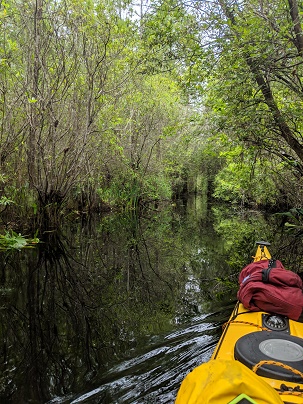 Shortly after leaving Maul Hammock, the trail begins to look more like a regular stream bed as we are entering the headwaters of the Suwanee River. We spend the rest of the morning and into the early afternoon fighting through the lily pads, making a measly mile and a half an hour. The highlight of this day is seeing a large owl fly out from the trees just over me and down the river, where he gains elevation until it’s above the trees and then it turns and leaves the channel and flies into the swam. At one in the afternoon, when we break for some lunch, which we eat in our kayaks. We’ve covered less than five miles. Shortly after lunch, we arrive where, sometime in the past few months, they’ve cut back the lily pads with a machine mounted on a small dredge that chops up the lily pads roots. These roots or rhizome, when floating on the surface, look a lot like an alligator. Despite the looks of the floating rhizomes, the paddling is now easy.

We arrive at Big Water platform at 3 PM. There’s a group of three guys who’d paddled up from Stephen Foster State Park. They are taking a rest before paddling back out, as they were not planning on staying the night. They have a cooler with them and offer us a cool beer. I enjoy not just drinking it, but putting the cold can on my sweaty forehead. This platform is on the western edge of a wide spot in the river, with nice views of the cypress line stream in both direction.  Later that evening as we prepare dinner, we notice how the bullfrog chorus will seemingly start in one direction and slowly make its way up or down the river, almost like a wave makes itself around a ball park. There are also a number of alligators and we watch several of them argue over territory (or mates).  I spend a few minutes fishing but have no luck, but as it was in the morning at Maul Hammock, an alligator stands on point, waiting for something to bite my line so he (or she) might help me keep my hands clean by relieving me of any fish I might catch. There’s a journal in the shelter register and someone suggests that if you hook a fish, you have to reel very fast if you want to keep it away from gators. With all the good food we have with us, we are not going to starve without fish. Instead, we enjoy a peaceful dinner along with a couple of ounces of Woodford Reserve Bourbon (Gary brought the good stuff) as we watch the light fade in the evening. Again, soon after the sun sets, the mosquitoes are back out and we head to our respective hammocks.

Sleep isn’t quite as deep this evening. I leave the fly off my hammock in order to get maximum airflow, but at 1:30 AM, a storm is approaching. I get up and put my fly on (while we are under a tin roof, it’s not that wide and the rain will be blown under the roof). Next, I make sure that everything is put up and secured and won’t blow away. Once done, I watch the approaching lightning turn the swamp into a magical place as the cypress and their bearded Spanish moss are silhouetted by the flashes of light. Soon, instead of flashes, we there are streaks of lightning dancing across the sky. I’m in awe. The wind picks up and I get back into my hammock in order to stay dry. Soon, I’m asleep, but wake up several more times as more storms move through the area.

When I wake in the morning, there is still thunder to the south. But the birds are singing throughout the swamp and the heavy humidity is moderated with an occasional cool breeze. Gary has brought along a can of corn beef hash along with eggs. We have a feast for breakfast, taking our time as we have a fairly short day paddling to Floyd’s Island.

We leave Big Water at 10 AM.  The river stays wide for the next mile or so, then it narrows up into channels where there is some flow of the water, but with tight turns that I often have to stop and backup to get my big kayak (18 foot) through the passage. We paddle through areas that have been burned in fires. Over the past two decades, there have been several summers in which the swamp and surrounding areas have experienced massive fires. But the good news is that the cypress is coming back and are standing eight to twelve feet tall. But it is still sad to see many of these burned out areas, but fire is a natural part of the ecosystem and they open up opportunities for new species of plants and animals to thrive. 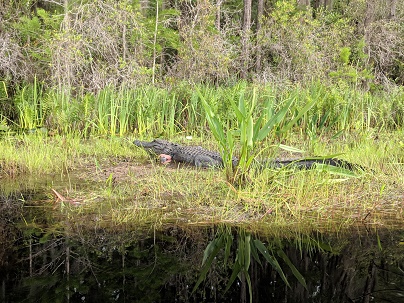 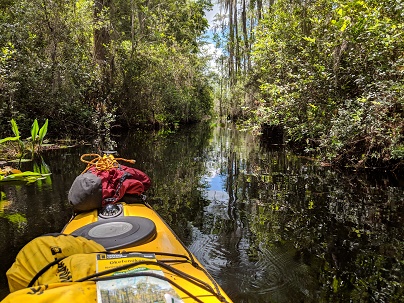 Five miles south of Big Water platform, we come to the cut off trail to Floyd’s Island. Both Gary and I have been here before, when we paddled into Floyd’s Island from Stephen Foster State Park. The canal pathway takes us across the bottom of Floyd’s Prairie and then narrows up into a tight tunnel like passage where paddles are used for poling instead of paddling. It rains off and on, but never very hard. Before we know it, we pull up on the sandy beach. We are at Floyd’s Island and it wasn’t even 1 PM. We’d paddled 7 ½ miles.

Floyd’s Island is named for the leader of the Georgia militia who invaded the swamp during the second Seminole war in 1838. His men found and burned a Seminole village, and named the island for him. They then continued to bushwhack through the swamp. As they headed into the swamp, they were in good condition and well equipped. When they came out on the other side, having done something no Europeans had done, they were ragged, but they had conquered a vast unknown section of the country. Floyd was both intrigued and horrified at the swamp. He called it a most beautiful and an infernal place.

With all afternoon to kill, we haul our gear up to the old cabin on Floyd’s island. We string our hammocks and set up a living room on the front porch. The back of the cabin is blocked off because a huge pine had fallen and crushed part of the back of the cabin. The last time we were here, in 2015, Gary and several others (there was a group of nine of us) slept in the cabin. I decided that night I would stay in my hammock. After hearing about the rats, I assumed I’d made the right decision. 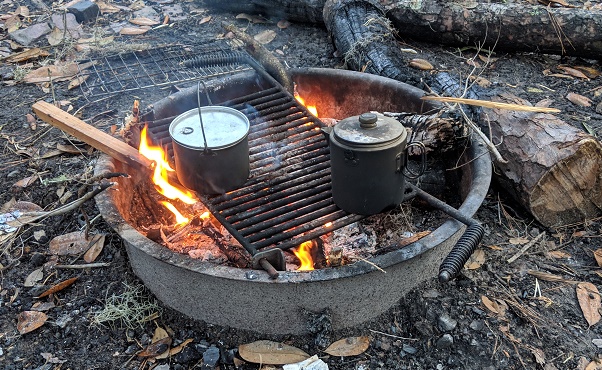 We eat lunch under the front porch during a downpour. A turkey and a fawn with spots make their way through our camp as we wait for the rain to clear. Later in the afternoon, when the storms have cleared, we move our kayaks, portaging over the quarter mile or so of the island, so that we’d be ready for the next day’s paddle. That evening, we cook over an open fire. The smoke helps deter the biting flies. We enjoy crackers and cheese, party nuts, along with some Johnny Walker Black Label. Again, I’m impressed with Gary’s beverage selection. I’m saving my cheap bourbon. Tomorrow, Gary will paddle out of the swamp while I will stay for another night.

Write up of Day 1