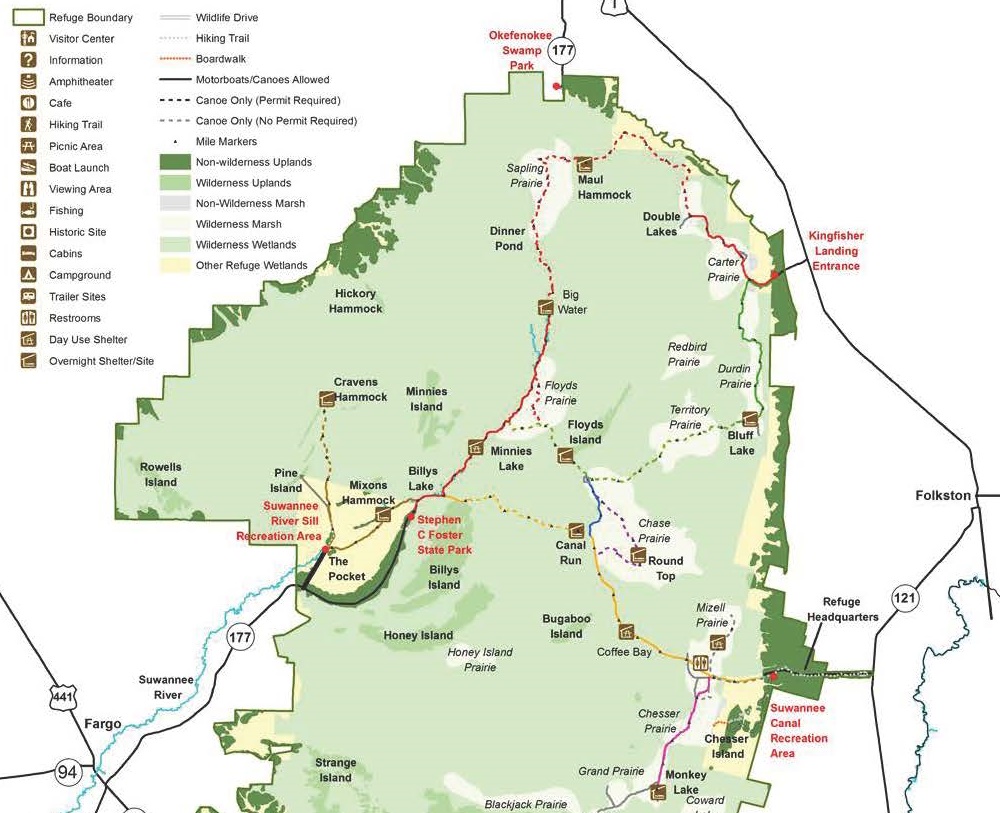 This is my third and final post about a 5 day, 4 night paddle in the Okefenokee Swamp. The map shows our route as we started at Kingfisher and paddled to Maul Hammock platform. I wrote about this on my post for Day 1. From there, we paddled to Big Water on Day 2 and to Floyd’s Island on Day. This is covered my post on Days 2 & 3.  Counting the extra miles I paddled on Day 4, I paddled a little over 50 miles in 5 days, covering a variety of wilderness settings.

The storms clear out early Sunday evening while we camp on Floyd’s Island. After dark, we can see the stars overhead, through the trees, along with hundreds of lightning bugs, more lightning bugs than I’ve seen since I left Michigan. Of course, there are also mosquitoes and biting flies. In fact, the biting flies are so bad that when away from the fire, I find myself wearing a bug net over my head. But things are fine once I crawl into my hammock where I read and catch up with my journal before falling asleep. On Monday, we plan to make it an early start as Gary needs to get back home in order to be at a meeting on Tuesday morning.

We wake early and begin to pack up our gear. As we’d portaged our kayaks across Floyd’s Island the day before, we quickly eat some fruit and granola and haul our gear down to the boats. After loading up, we cast off into a narrow trail clogged with cut chunks of logs. The last time I was here, this trail wasn’t even open. A hurricane several years earlier had clogged the trail with down trees. It appears as if someone came through with a chainsaw, cut the down trees into firewood lengths of logs, and left them floating in the water. Because the logs are small, we can pushed them under the bows of our boats or push them off to the side. While it is hard work, it’s doable. After a hundred or so yards of difficulty, the path clears from logs

Like the path into the island from the west side, the east side was fairly narrow, but is only a mile or so long. It’s also fairly shallow and we follow (chase?) a rather large alligator (13-14 feet) for a while. He’ll come up, look at us, and then swim fast for a ways, before stopping. I’m pretty sure it’s male, for females don’t generally grow this large. As we paddle straight ahead, we soon close back in on him, and he takes off again. He does this several times until he finds a place to leave the channel for the swamp. All I can figure is that water is too shallow to dive and let us pass over top, which is what the alligators normally do.

After thirty minutes of paddling, the heavy vegetation departs as we entered Chase Prairie. A few hundred yards later, we came to the point where the trail runs back up through Bluff Lake to Kingfisher Landing (where we had started our paddle on Friday). I have been to this spot a few years before, on a solo trip with an overnight on Bluff Lake platform. But instead of turning north, we turn south toward the Suwannee Canal, 2 1/2 miles away. Along the way we pass the turn off for Round Top platform, where I plan to camp for the evening. It’s just three miles down the purple trail. I decide to go around the long way to make sure that Gary finds the Suwannee Canal, which will take him back to the main entrance to the swamp. 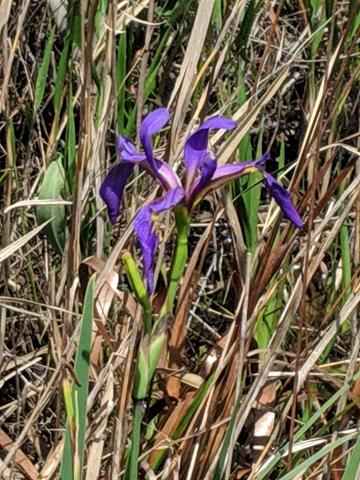 This is my third time in Chase Prairie and, like the other times, there are plenty of alligators around. The prairie is fairly open with lots of pitch plants and irises in bloom. There are also a number of egrets and herons around. In the distant, I can hear the calls of a sandhill crane.

When we reach the canal, the path opens up with the tall trees forming a nice canopy blocking the sun. We paddle south, and shortly after the 9 mile marker (the mileage to the main entrance where Okefenokee Outfitters is located), Gary and I say goodbye. He continues paddling on straight, while I slip through a channel that takes me back into Chase Prairie. I have a reservation for one more night at Round Top platform, which is about two miles back into the prairie. The sun is up and its warm, but the paddling is easy and a little before 11 in the morning, I arrive at the platform. I’d stayed here once before and it is by far my favorite place to camp in the swamp as it has nearly 360 degree views of the swamp.  Getting out, I set up camp, fix an early lunch and then catch up with my journal. Later I start reading. I’m only half way through David Halberstam’s The Fifties and with nearly 400 pages left, I have plenty to do to occupy my time.

After an afternoon of reading and napping (I found myself enjoying two nice naps), I put the kayak back in the water and paddle north on the purple trail which takes me, after three miles of paddling, back to where we had been earlier in the morning. I had not paddled this section before and am glad I decided to make the effort for its beautiful, especially as the light softens late in the day. On the way down, I see an alligator catch a duck by the tail. The duck is flapping and the gator, which is in very shallow water, drags the duck toward the channel, where I am located. Seeing me, the gator pauses and the duck quickly flies away. I assume the gator had planned to drown the duck in the deeper water and enjoy duck for dinner. I also spot a pair of sandhill cranes.

As I come back after a six mile paddle (three up and three down), I notice the crescent new moon is in the west. Most of this trip was in the dark of the moon, but not that I could tell it as the clouds had pretty thick. In the east, the sun sets as I snap a few photos. Then it is time to fix dinner, some noodles and canned pork. Twenty minutes after the sunsets, the mosquitoes appear as soon as I can finish my dinner and clean up, I crawl into my hammock, under the safety of my bug net.  I wake up in the middle of the night and step to relieve myself. In the south, Scorpius and Sagittarius are just above the horizon. But the mosquitoes soon find me and I crawl back into my hammock.

Around 3 AM, I wake again, as I was the first night, to what appears to be the sound of a chainsaw attempting to be started. Soon, all over the prairie, alligators are bellowing and making this weird sound. I listen off and on, between snoozing. They are so loud (one sounds as if it might be underneath the platform), that I can’t hear the mosquitoes buzzing just outside my netting. They continue on till dawn, and by the time I get up, they are quiet.

In the morning, I fix coffee and oatmeal for breakfast and enjoy eating slowly, taking in the sights. I leave around 9 AM and paddle to Coffee Bay platform, where I stop and rest, taking time to read a few chapters in my book, before resuming my paddle. I don’t see anyone until I run into a couple fishing in a jon boat a mile or so from the entrance into the swamp. They are the first people I’ve seen well over 24 hours. I am back to entrance at 1:30 AM. After loading my gear in the car and putting my boat on top, I am soon heading north to Savannah.