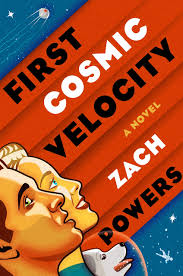 I’m not sure how to classify this novel. At times I thought the author had written the first anti-Sci-fi (similar to the anti-western genre of films that began to challenge the classical westerns in the 1960s). At other times, it felt as if I was reading a comedic Cold War spy thriller or an alternative history. Regardless of the genre, this book is a fun read.

It’s 1964 and the Soviet space program is a deception. Instead of challenging the United States in the race to the moon, the Soviets haven’t yet had a successful mission. They have placed men and women into space, but have yet to successfully bring them back to earth. The cosmonauts have either burned up on re-entry or in the case of Leonid, are doomed to orbit the earth for the entire book. You’ll have to read it to understand what happens. To make up for the lack of success, the Soviet cosmonaut corps are made up of identical twins, each given the same name. While one sibling conducts a suicide mission, the other receives a hero welcome back home. The secrecy of the program is so guarded that only a few know about it. Even the Soviet premier, Khrushchev, doesn’t know of the deceit. At first, even Ignatius, the KGB-type agent who is always close by, doesn’t appear to know (even though she knows more secrets than most). In a country with lots of deception and secrets, maintaining this secret is of ultimate importance for everyone involved (including the remaining twins) risked execution for treason is exposed.

This secrecy leads to humorous moments such as when Khrushchev volunteers his dog for the next space mission. Everyone but the Premier hates his ratty dog, and they can’t find another one like it in all Russia. Khrushchev aids secretly suggest they leave the disliked mutt in space (not realizing that might actually happen as the space agency has no way of returning it alive to earth). The space program is frantically attempting to build a successful heat shield that will allow cosmonauts (and dogs) to safely return, while two of the surviving twins (the second Leonid, the brother of the Leonid in space, and Nadya, whose sister was the first cosmonaut, run away.

The book ping pongs between 1964 and 1950, the year when a famine struck the Ukraine, That’s the year the twins who were both renamed Leonid were taken from their grandma to be trained for the space program. As the reader is taken from the present (1964), into the past, we gain inside into bits of history such as the struggle within the various states within the Soviet Union, the impact of the war (World War 2), and the hope of the space program. Powers also brings up the discussion of faith, looking at how the older members of society (such as the twin’s grandmother) practices faith and prayer, and its role (or lack of a role) with the younger generations who have grown up in an atheistic society. In one discussion, it is suggested that a society without gods must create them from their “heroes”

This is a delightful and unique novel. I recommend it for an enjoyable read. For full disclosure, I was in a writing group with Zach Powers when I first moved to Savannah (and before he left the area). I was under no obligation to write this review.