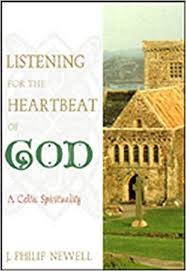 I have some problems with this book, but I’m glad I read it. I did like the last chapter where I found myself in agreement with the author on the need to draw from a broad theological base. He labels these two theological camps for disciples: John (the emotional) and Peter (the rational). While I agree with this,he overstates his case when trying to separate the two camps within church history.

My problem is that Newell sets Augustine theology (along with the Protestant Reformation), in conflict with a more ancient Celtic theology. He grounds Celtic theology in the thoughts of Pelagius (a lay theologian who is thought to have come from the British Isles and declared a heretic by the church in the 5th Century). Augustine was the theologian who challenged Pelagius’ thoughts, especially on free-will and original sin. Little is actually known about Pelagius’ thought outside the response of his opponents (this may well be the case of the winners writing history). In fact, so little is known about Pelagius that makes me wonder about Newell’s claims. He suggests that Pelagius may have come back to the “Celts” after his conflict in Rome, but it appears he traveled on East, where he had a conflict with Jerome who was living in Palestine. Then Pelagius disappears from history.

Newell is correct in pointing out problems with Augustine’s theology, especially linking the fall and original sin, which he saw as being passed on generation to generation through sexual reproduction. Then he sets up a “straw man” by linking Calvin and Calvinist thought to such views. Calvin and others struggled with this concept (See Jane Dempsey Douglass, Women, Freedom & Calvin, chapter 4). Furthermore, while Calvin realized sin was a real issue, he never felt the imago dei was completely wiped away from humans who had been “created in God’s image” (see John Calvin, Institutes, I.15.4 and Charles Partee, The Theology of John Calvin, 126ff.). Newell’s argument rests on his belief that within Augustine/Calvin thought, there is nothing in creation that can help us understand God. That God’s image had been totally purged by sin. While Calvinist thought certainly suggests that because of the fall, we cannot obtain the knowledge of salvation on our own, it also maintains that God has implanted an “awareness of the divinity within the human mind” (Institutes I.3.i) and that the “knowledge of God shines forth in the fashioning of the universe and the continuing government of it” (Institutes I.4).

It is my opinion that Newell sets up a false dichotomy within Calvinistic thought, where the world is seen as totally evil and contrasts this with the Celtic thought where the world was seen as good. The idea of the physical being evil is more of a gnostic idea than Augustine/Calvinistic thought. As I showed in the previous paragraph, Calvin never saw the world as totally evil. Yes, creation is good, but because of our sin, it has been tainted and we can’t fully know God through it. We need to experience the revelation of God in Jesus Christ, which is given to us through the Scriptures.

Newell also conveniently ignores the Calvinistic concept of “common grace,” the idea that God implants grace into all of humanity, even those who are not believers, for the purpose of helping all people. Could not such “common grace” allow everyone to enjoy creation and benefit from it? As Jesus says, it rains on the just and unjust.

Another area that I took issue was the lay centered leadership with Celtic thought verses the clergy leadership of the church. While the clergy certainly dominated the Roman Church, the protestant reformation sought to solve this issue with the concept of “the priesthood of all believers.” This thought balances the power of the laity and the clergy and insists that Jesus is the only priest needed. The clergy/laity separation seems to be another area that Newell is reaching to show the benefits of the Celtic ways. While this would remain true for Roman (and even Anglican) theology, it does not fit with non-Anglican Protestant thought, such as the Presbyterians.

While I agree with Newell in the importance of creation displaying the glory of God’s handiwork, I don’t think the followers of Augustine or Calvin would necessarily disagree. We live in a world that was created and declared good. Yes, as Newell points out, the Celtic ways had ties to pre-Christian beliefs, but that’s not necessarily a problem. You can make the same argument with early Roman Christianity, too.

As for this book, I recommend reading the last chapter, which applies us today. When we strive to work out our own salvation in fear and trembling (Philippians 2:12), we do so by involving the emotional sides of our brains along with the rational side. One final comment, the fear and trembling quote comes from Paul, which I don’t believe Newell even mentions.

9 thoughts on “Listening to the Heartbeat of God”