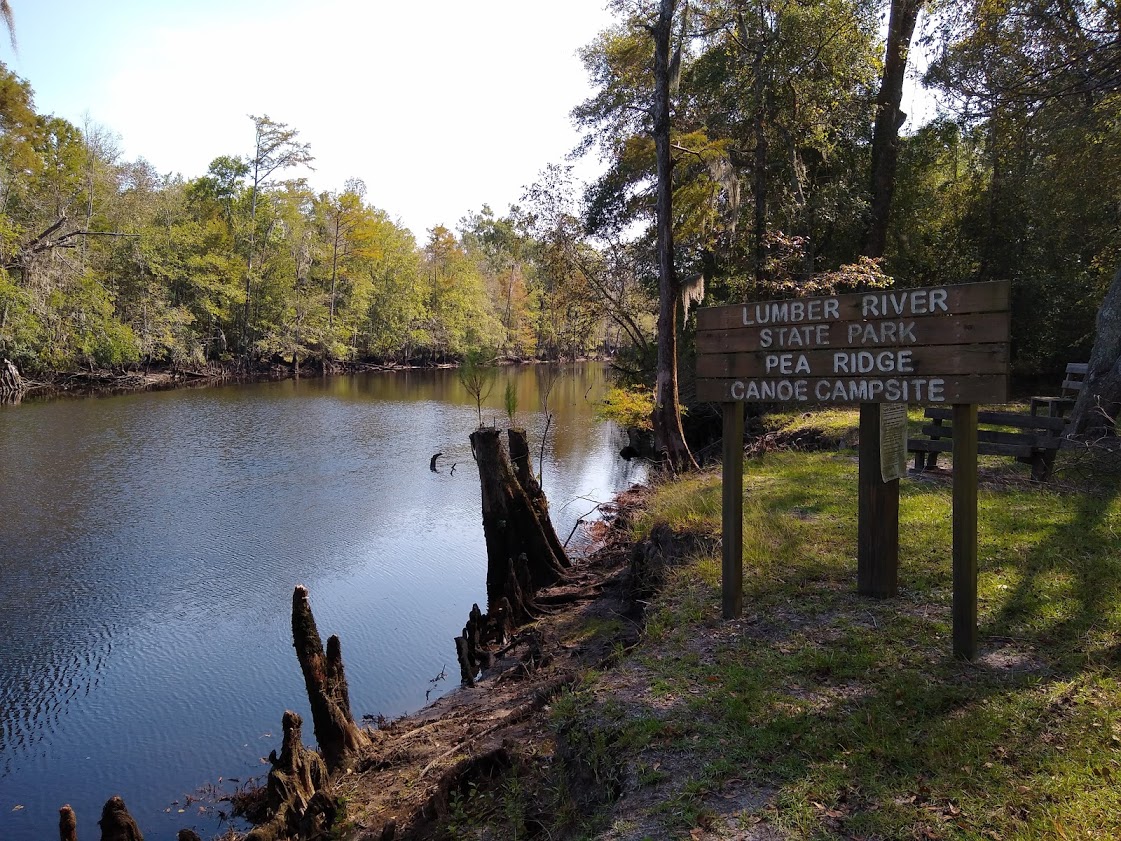 A high bluff along the western bank of the Lumber River just south of US 74, Pea Ridge is a lovely spot. We arrive early enough to enjoy it. For a wilderness site that is only accessible to the public from the water, this is near perfection. There are a few benches, a picnic table and a trash can and grass! Across the river stands several huge cypresses, their needles turning brown. Around us are a variety of trees. The bank of the river is lined with cypress and water birch. The site itself features sweet gum, maple, sycamore, pines and holly. I place my hammock between trees and find a mossy place to set up my tent so that I have a good view of the river. After setting up camp, I lie in my hammock resting and reading for an hour, then go for a swim before dinner. 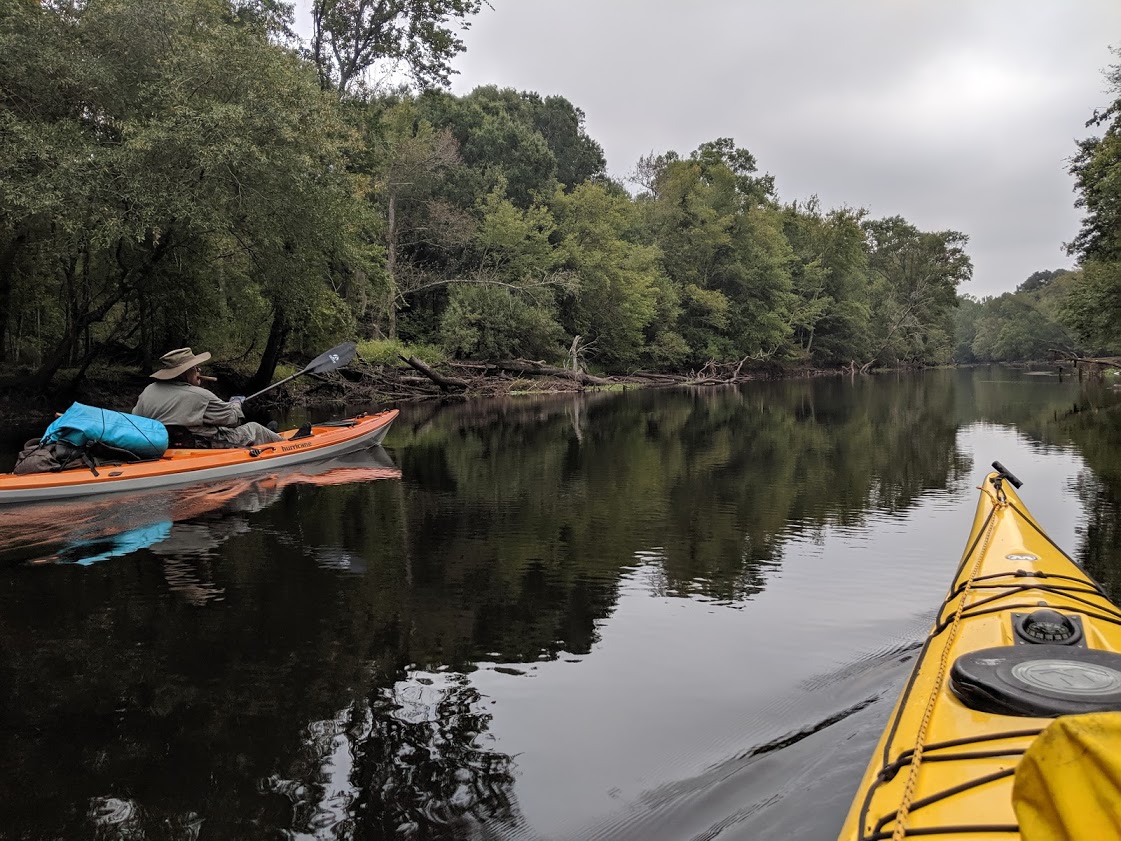 This is our second night on the river.  We’ve covered 14 or so miles after launching at Matthew Bluff bridge late yesterday morning. The first day was supposed to be easy for we knew it was going to take time to shuttle vehicles. Not wanting to leave a vehicle at a bridge for two days, Joe Washburn, the pastor of First Presbyterian in Whiteville agreed to help us with the shuttle. After we got everything ready and loaded in our boats, we slid them down the muddy bank into the river. My dad has his boat in the water first but falls into the water as he tries to enter his boat. The river drops off quickly. After fishing out his equipment and restowing it, we were soon on the way. The river around the Matthew Bluff bridge was trashed with beer and soda cans and household waste, as some people treat the area as a dump. Thankfully, after a couple turns, the river becomes more natural. We’d been warned when we presented the ranger with our float plans that the river had not been cleared of blow-down trees since Hurricane Florence. That was a year ago. Sadly, they’d just finished clearing the entire 100-mile waterway from on Drowning Creek and the Lumber River of down trees from Hurricane Matthew which occurred in 2016 a month before Florence struck. He told us to be aware that there would be some blow downs above Boardman (Highway 74). He was right. About a mile into our trip, we came across the first, a huge old oak that laid across the river. The water was deep and I pulled my kayak parallel to the log, slid out of the boat and straddled the log (as if I was riding a Clydesdale, pulled my boat over the log and tied it off and then helped my father get his boat across. Thankfully, there were no problems and we were soon on our way. 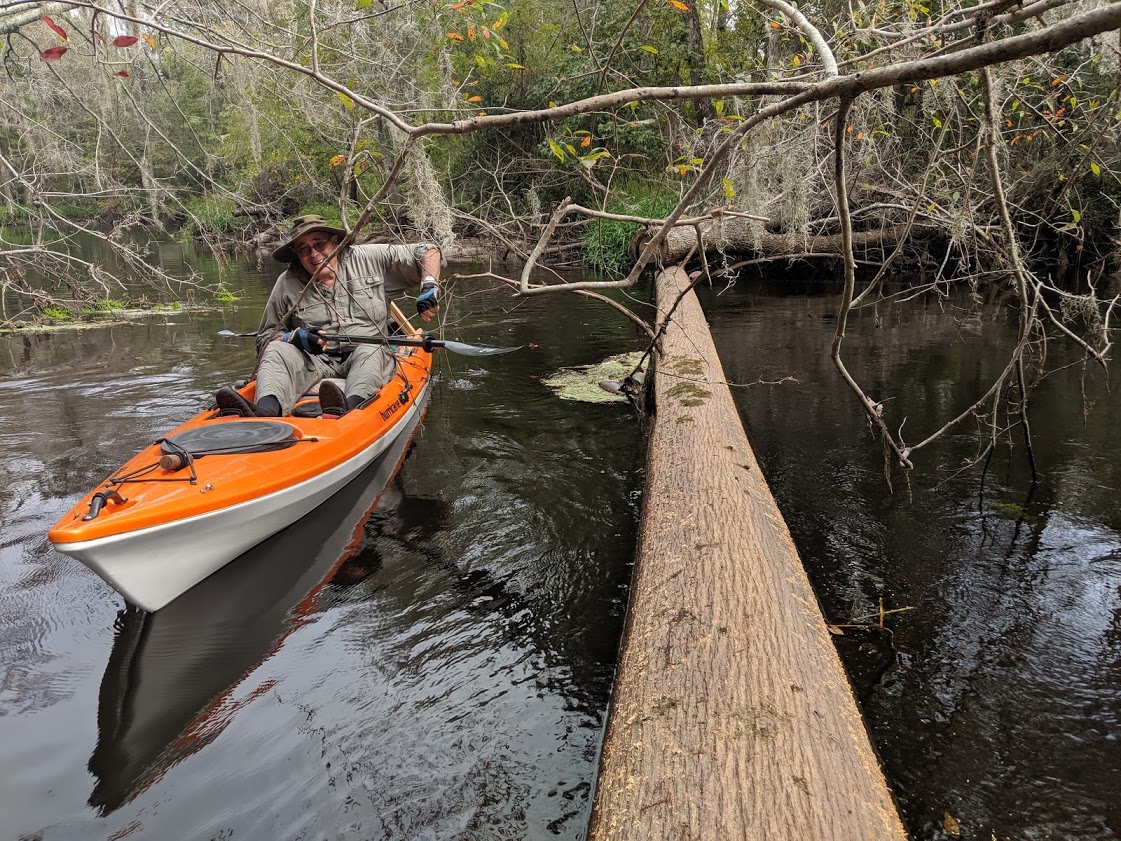 After crossing the Willouby Bridge, four or so miles down the river, we came to another blowdown where we had to get out and cut a path for our boats to make it through the branches of the down tree. Our first campsite, Buck Landing, was a mile or so south of the Willouby Bridge, on the east side. I kept wondering when the site was going to show up, as I saw few pine, trees that indicate high ground. This area was swampy and populated with cypress, tupelo, river birch and a few bay trees. But soon after wondering where the pines were, they appeared and right afterwards was the campsite. 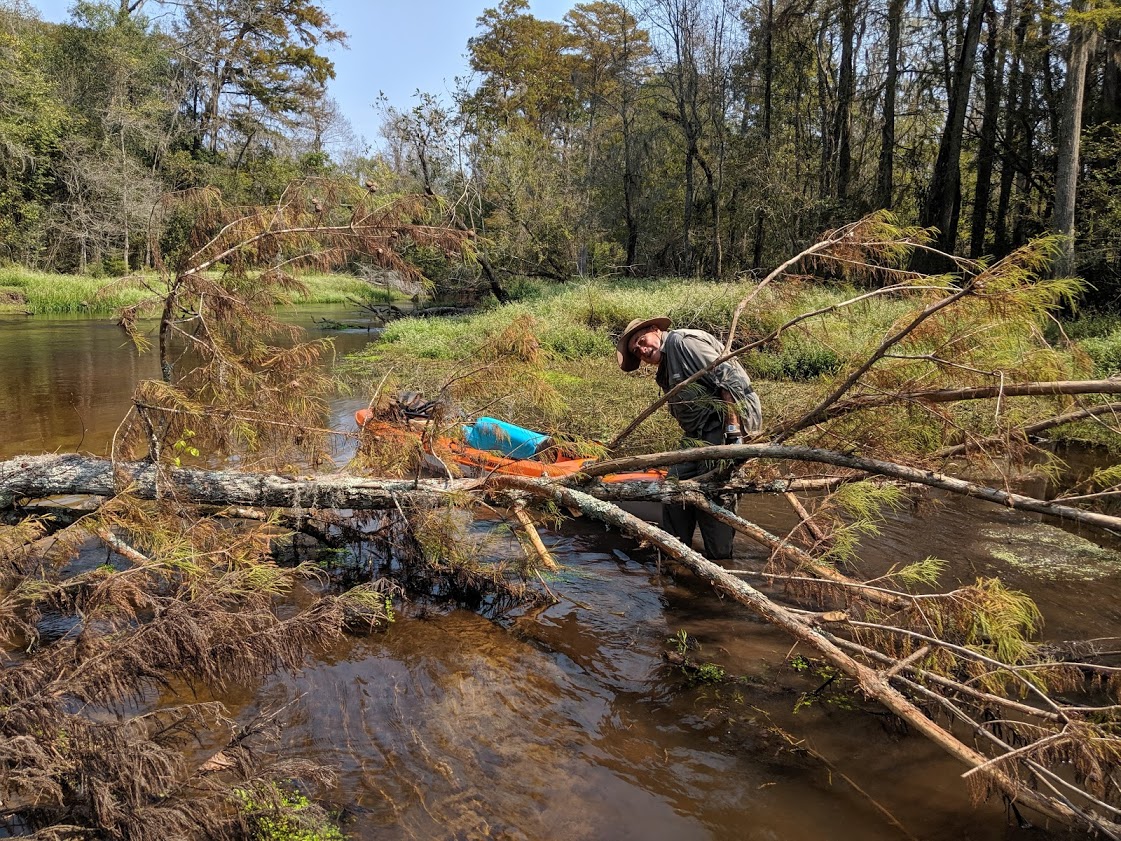 Like Pea Ridge, Buck Landing was also a wilderness/canoe-in site but with easier access by locals as the one trash can “over-runneth” with beer cans. I spent a good deal of time emptying the trash and crushing the beer cans so that they were all able to be contained within the provided can. Although I may be mistaken, I was pretty sure the no one had paddled the river with that many cases of beer. This site also had a small pavilion, which wasn’t needed due to the clear skies, but the supports made a good place to sling my hammock. As the site was on the eastern side of the river, we saw a nice sunset through the hardwood swamp on the other side. Shortly thereafter, a thin crescent of the new moon was visible. After a dinner of some MREs that my father had brought along, we both decided to avoid the mosquito battle and headed off to bed, listening to the owls hoot and the buzz of insects. 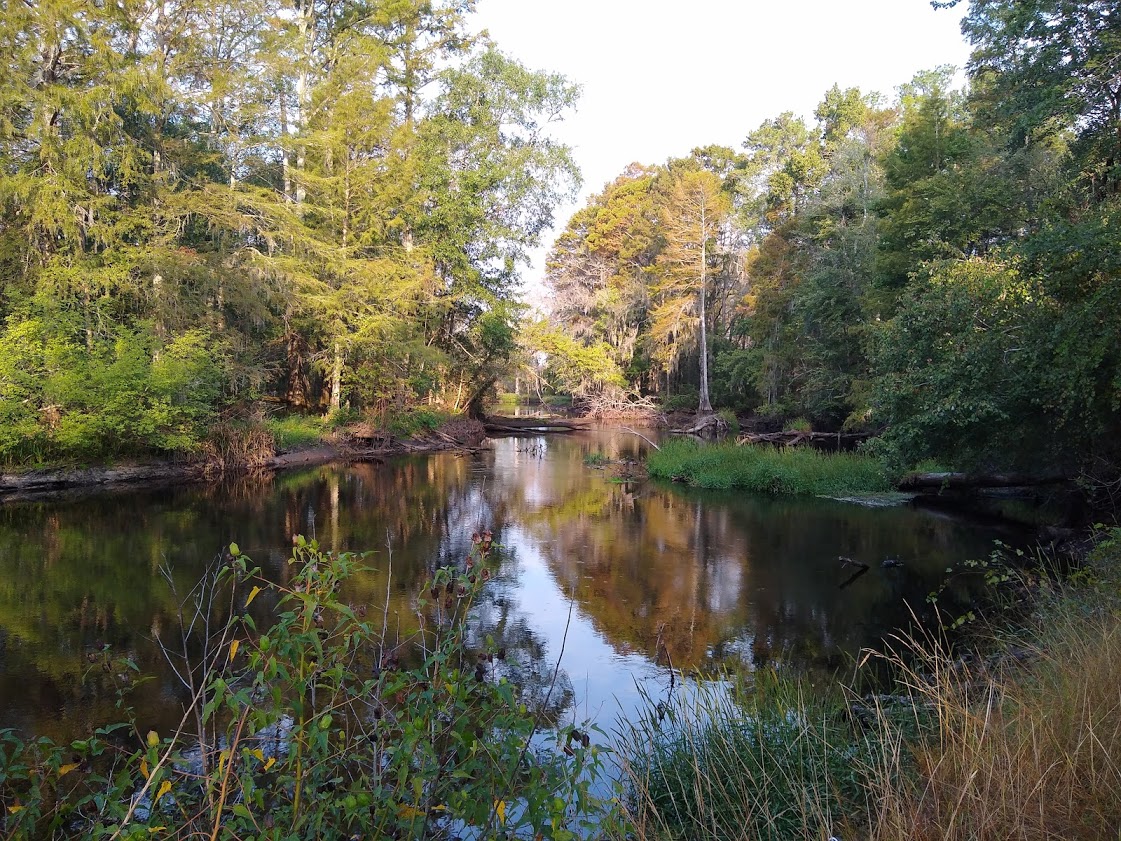 The next morning, I’m a little panicked. When I pulled out my glucose test meter (I am a diabetic) to check my blood sugar level, it wasn’t working. I wasn’t bothered too much until I made my way over to my boat and pulled out the small dry bag I always carry with me whether kayaking or sailing, in which I keep a backup meter. The battery was dead. As they are different kind of meters, I can’t change the battery from one to the other. I wasn’t sure what to do, but my father was more concerned than me as he’s never dealt with diabetes. I told him I thought I would be okay and hopefully I could get a new meter when we crossed US 74 at Boardman, later in the morning.

After breakfast of coffee, an orange, and oatmeal, we shoved off a little after 9 AM. It was to be a difficult morning. It takes two hours to cover just a few miles as we spend almost as much time in the water as in the boat as we pulled over, under, through, and around fallen trees. When we weren’t pulling ourselves through down trees, we enjoyed watching kingfishers dart up and down the river, and great blue herons led us downriver when we interrupt their hunting. I even saw a red tail hawk. Throughout the morning, I keep snacking, not wanting my blood sugar to drop.  After two hours of exhausting work, we finally get to where the river opens up more. Then, maybe a mile from the bridge, we passed a fisherman who’d pushed a jon boat up the river with a small battery powered motor. Only then did we know we were done with blowdowns.

At the wildlife boat ramp at US 74, I knew better than walking into the village of Boardman. It used to be a large town, back in the early 1900s when the area was heavily lumbered,but the only business left today is a gas station. I tried calling local pharmacies in Fairmont and Chadbourn, hoping to find one that delivered. Unfortunately, as it was now noon, all their delivery drivers had gone out to make their daily runs. They laughed when I asked about Uber or Lyft.  But, while I was waiting, with my meter out in the sun, it began working again, which made me pretty sure it was a problem with humidity. Being able to see that my blood sugar was in a good range, we continued paddling another mile to Pea Ridge campsite.

That night, we built a fire and talk. For some reason, my dad asked me about which of his guns I want him to leave me. While I have guns (all of which are in need of being oiled because they haven’t been shot in decades), I’m not a gun collector. All my guns stay locked up in a gun safe. But I told him I’d take the 30-30 Winchester lever action in case I move back out west. He suggests instead taking a higher powered gun, but I told him the Winchester was enough. Then he asks about shotguns and I was surprised to learn that he has a 20 gauge double barrel coachman (short barrel gun that those who rode “shotgun” on stagecoaches carried). What are you doing with that? I ask. “It’s your moms.” “What?” Then I learn the story. They were visiting my great aunt who, after my father’s uncle had died. She lived by herself out in the country. My mother asked if she wasn’t scared living out there. She said no, and showed my mother the gun. My mom, who I am sure was trying to be nice or trying to make a joke, said “maybe that’s what I need.” Well, lets just say, “I don’t think her next birthday went over well.”

After crawling into bed, I have a great view of Cassiopeia, Pegasus, and Andromeda, rising over eastern bank of the river. I fall quickly asleep and wake up once before morning. Taurus is overhead and Orion is rising just behind him.  It must be well after midnight, but I don’t check the time and when I wake up again, it’s dawn. I get up, write a bit, then prepare coffee and water for oatmeal.

We’re on the river at 9 AM. It’d been cleared from here on down to our takeout point at the State Park at Queen Anne’s Landing. It was an easy 9 ½ miles. Down trees are not a problem, but at one place there’s a sandbar that runs across the river and we end up getting out of our boats and pulling them across it. After a lazy float, we arrive at the landing a little after noon.

The Lumber River is located in Southeastern North Carolina. The river starts north of Laurinburg, as Drowning Creek and wanders 115 miles as it passes the city of Lumberton and the town of Fair Bluff on its way to merge with the Pee Dee RIver a few miles into South Carolina. The state of North Carolina maintains a linear park along the river from the 15-501 bridge to Fair Bluff. In 2016, Hurricane Matthew dropped so much water into the river basin that much of Lumberton and Fair Bluff were below water. I used to work this area back in the early 80s for the Boy Scouts of America. At the time, Fair Bluff was a delightful small town. Today, the town is mostly deserted. To learn more about the river, check out the Lumber River State Park website.