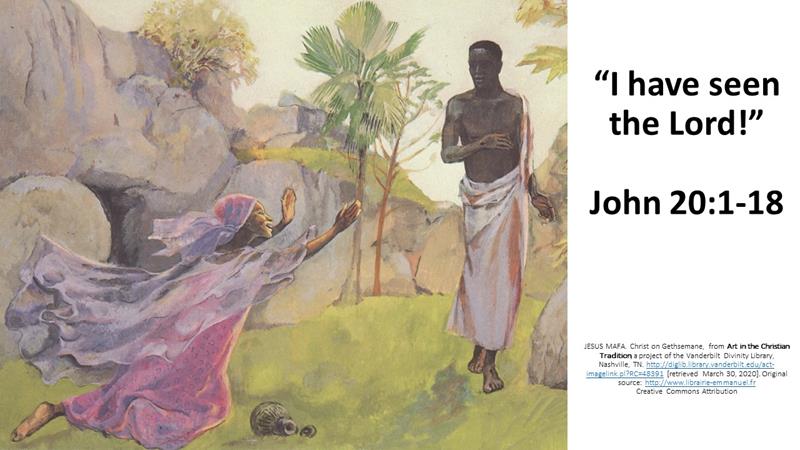 Throughout Lent, we have been looking at pieces of art from around the world as a way to get into the Scriptures for each Sunday. We’re going to continue this tradition through the Easter Season. Today, we are looking at another artwork from the country of Cameroon, as the artist imagines Jesus and Mary Magdalene looking like the people of that country. Let’s think for a moment about what Mary Magdalene is thinking up to this point in the story: 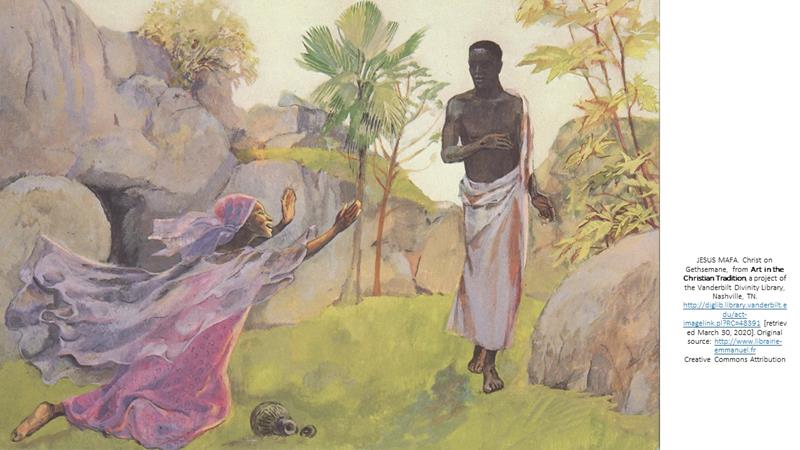 I’ve stuck by Jesus ever since I encountered him that day on the road, long before we came to Jerusalem, when he freed me of those seven demons that had tormented me.[1] I gave him what I had to support his ministry. I followed him from Galilee to Jerusalem. This past week has been overwhelming, from the glorious entry into Jerusalem, beginning with the waving of palm branches and the shouting of Hosanna. Whenever I could be close to Jesus and listen to his teachings, I was there. I heard him teach in the temple about giving to Caesar what was Caesar’s  and giving to God what was God’s, and about the generosity of the poor woman with two coins, whom most ignored, but whom Jesus lifted up as an example of faith. I was there, in the background at the dinners, and I followed Jesus as he was led away like a criminal. How a man who had freed me of such evil could be considered a criminal and a threat to the nation, I’ll never understand. I watched in horror as he was beaten and mocked and then led to the hill of death, where they crucified him. I couldn’t believe what was happening.

I’ve had a hard time sleeping the last two nights. I kept wanting to be with him again, but I know he’s dead. When the birds began to sing in the predawn hours, I decided to get up and head to the tomb. I wasn’t prepared to find it empty, and Jesus’ body gone. I wondered where they had taken my Lord, and ran and told the disciples. Afterwards, as I was wandering around lost, I couldn’t believe my ears. He called me by name, “Mary.” Things are never going to be the same…[2]

Now let us listen to today’s lesson as I read from the 20th Chapter of John’s gospel.[3] 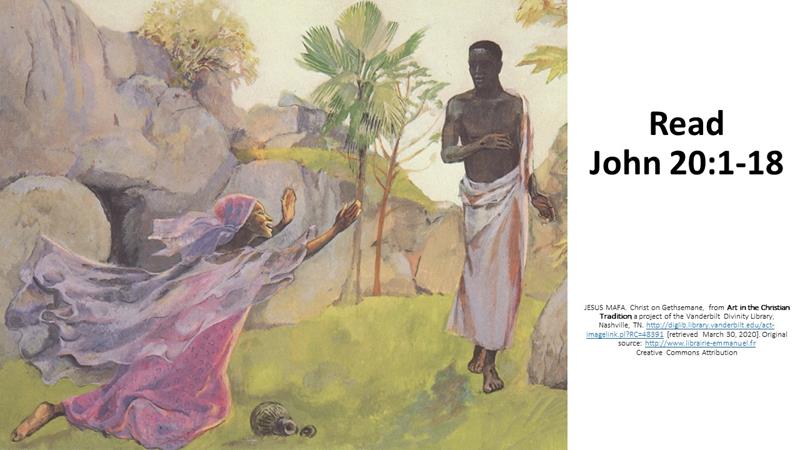 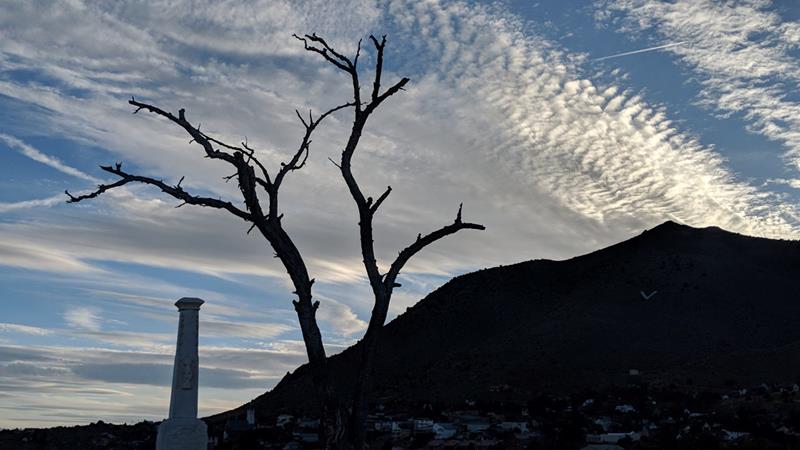 We have spent all of Lent looking at the last week of Jesus’ earthly ministry: From the entry into Jerusalem on what we call Palm Sunday, to the teachings at the temple and the various dinners and then the betrayal that led to Jesus’ death. On Friday, we appeared to be the end of the story. Jesus is dead. His lifeless body is sealed in a tomb as the sun is going down on the day for preparing for the Sabbath. Everyone returns to their homes or where they’ve been staying. I’m sure Caiaphas, the chief priest, and Pilate, the Roman governor, along others in leadership positions are glad to be done with this rabble-rouser. They may have even rested well on the Sabbath. Others, like the disciples and those who had followed Jesus were troubled. But they, too, felt it was over. They saw Jesus’ limp body be taken from the cross. But, as we know, the story doesn’t end. 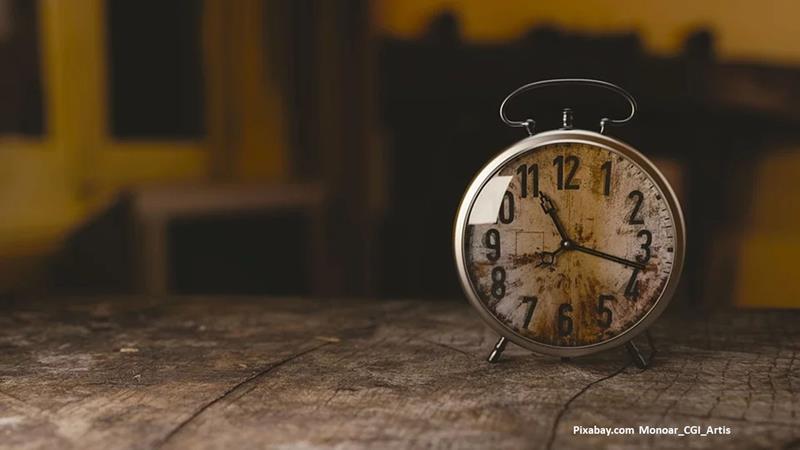 John begins the 20th Chapter with several statements about time. It’s early. It’s the first day of the week. In the first chapter, John’s gospel has an echo of Genesis. Both start the same way, “In the beginning…” John takes that well-known phrase from the opening chapter of Scripture and applies it to Jesus. Jesus, the Word, was with God at the beginning of creation. God is doing something new. As in the seven days of Creation, when God created heaven and earth, we now have a new week. In the first week of Creation, God created humanity, the crown of creation, on day six. Now, on day six, God once again does his triumphant work, reconciling a sinful humanity with the divine through the sacrifice of God’s Son. That’s Good Friday. God rests on the seventh day, the Sabbath, our Saturday. And then, on the first day of the new week, in those early morning hours, God begins a new age. 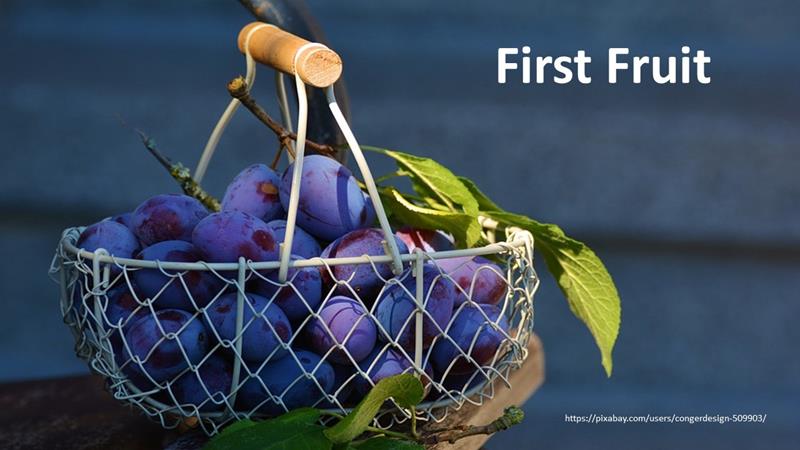 As Paul proclaims, Christ is the first fruit of those who died.[4] With the resurrection of Christ, God is beginning to do something new. N. T. Wright explains in his essay on John 20, the Easter story is more than just God putting a happy ending to a really bad week. Easter is the beginning of God’s new creation. The work of the Father in creation, and the work of the Son in redemption, are complete.[5] It’s now the eighth day. We’re in a new era. 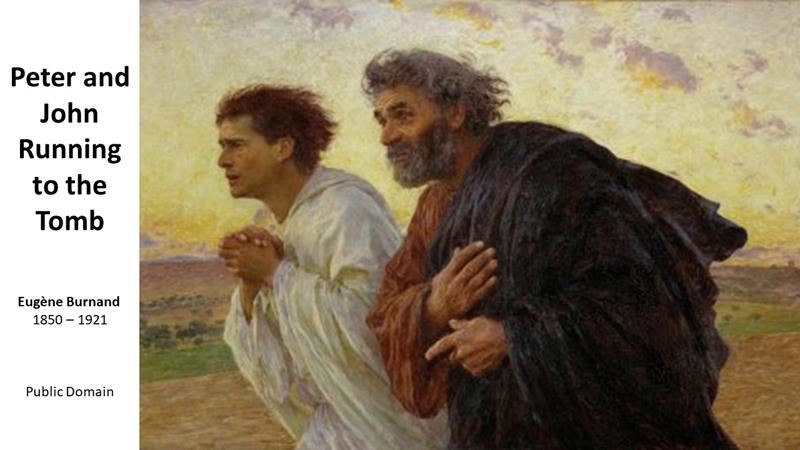 The reports of this new era start with a restless Mary Magdalene going to the tomb while it’s still dark and seeing that it’s open. Of course, her experience, as is ours, is that once you are dead, there’s no coming back. So she runs to tell the disciples. Two of them, Peter and probably John, race each other back to the gravesite.[6] And there they find an empty tomb, with the linen cloths that had wrapped Jesus’ body left behind. But none of them know what to think. In verse 8, we’re told that the faster disciple believed, but what did he believe? The next verse seems to indicate that he only believed the tomb was open, and that Mary’s report was factual. They did not understand that Jesus must rise from the dead. So instead of hanging around, they head back to bed. 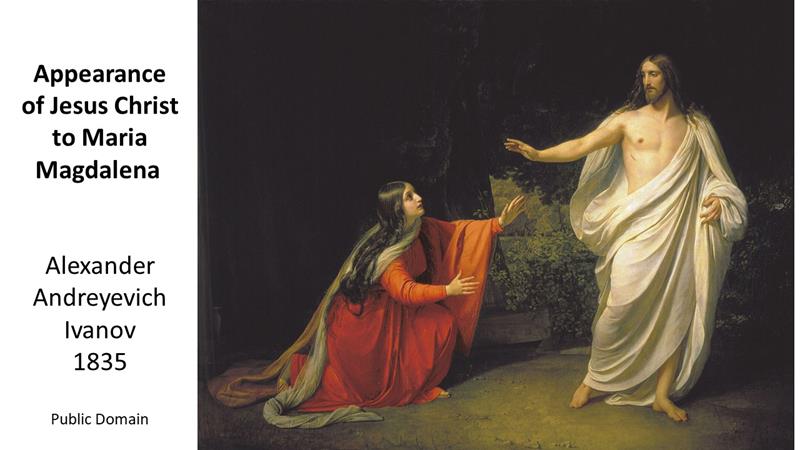 Mary hangs around. We get a sense of what she is thinking when she answers the angels who want to know why she’s crying. “They’ve taken away my Lord, and I don’t know where they laid him.” Mary Magdalene still believes that Jesus is dead. She assumes, because she can’t imagine otherwise, that some grave robber broke into the tomb and took the body away. In her mind, this is a terrible deed. It would be a terrible deed. You don’t mess with dead bodies. Even our military prosecutes soldiers who desecrate enemy dead. After all, once they are dead, they no longer pose a threat and are no longer enemies.[7]

Mary Magdalene, who has a front row seat at what God is doing, can’t imagine what’s happening. Even when she first sees Jesus, she assumes he’s the gardener. After all, dead men don’t walk around. She thinks the gardener may even be responsible for removing Jesus’ body. It’s only when Jesus calls her by name does she realizes that what has happened is more marvelous than she could ever imagine. John has already told us that the Good Shepherd knows his sheep by name.[8] And Jesus knew Mary, and when she hears her name, she recognizes him.

In Jesus’ post-resurrection appearances, he is always assigning his followers with a mission. Jesus assignment for Mary Magdalene is insightful. Go and tell my brothers…” he says. The disciples are elevated; instead of disciples, they’re now brothers, on equal terms with Jesus. Furthermore, Mary is lifted up into this family, for Jesus tells her that he’ll ascend to “my Father and your Father, my God and your God.” Having been called by name, Mary Magdalene is now a part of Jesus’ family.[9] She runs off to obey Jesus, going to the disciples and saying “I have seen the Lord!” Could there ever be a more wonderful proclamation? Their world would never be the same. 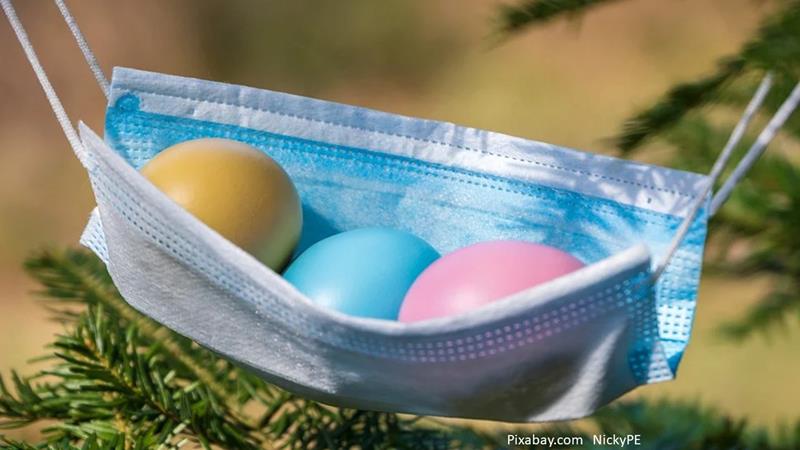 This is an Easter unlike any we’ve experienced before. Instead of being together, wearing new clothes, bringing flowers to decorate the cross afterwards while kids hunt Easter eggs, we’re all separated as we strive to stop this virus that has unleashed death upon the earth. In some ways, we’re like the disciples, who were essentially hiding on that first Easter. Yes, Mary was out, as well as Peter and John for a short period, but once they saw Jesus’ body is gone, they head back to where the rest of the disciples are hiding. In fact, if you keep reading, you’ll see the disciples were not only hiding, they were behind locked doors.[10] But this time of isolation didn’t last for them, nor will it last forever for us. Sooner or later, things will go back to some kind of normality.

We will once again be able to gather and to enjoy each other’s presence. Yes, we’ll once again show off Easter bonnets and hunt eggs and flower a cross. But we won’t be able to go back to exactly the way things were, and that’s okay. This was true for the disciples, too. They didn’t go back to those carefree days of traveling around Galilee with Jesus. But that was okay, too, because they were experiencing something new and even better. They got to tell the world the good news. 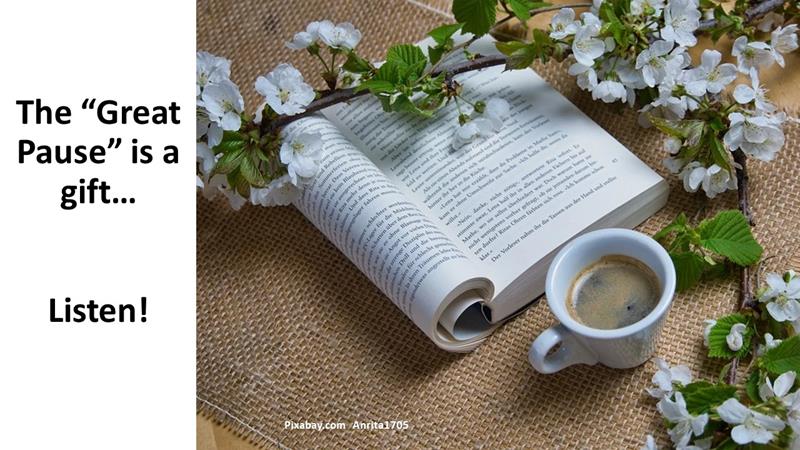 This is the meaning of this “great pause” we are living through right now.[11] In a way, we’re given a gift. We have the time we need to ponder what’s important in our lives. And if we can hold on to what’s important, what we value and cherish, our lives after things return to normal will be much richer. Friends, use this time, this gift, to grow closer to our Lord and to learn to depend upon him. And if we do that, we can be like Mary Magdalene, so when our Savior through the Holy Spirit calls us by name, we’ll be ready to answer. Amen.

[3] In the worship service, the Reverend Deanie Strength will do the opening monologue of Mary Magdalene’s thoughts and read the Scriptures.

[6] While John’s name is not given, it is generally assumed that he is the other disciple.

[7] For such rules from all nations including the United States, see https://ihl-databases.icrc.org/customary-ihl/eng/docs/v2_rul_rule113