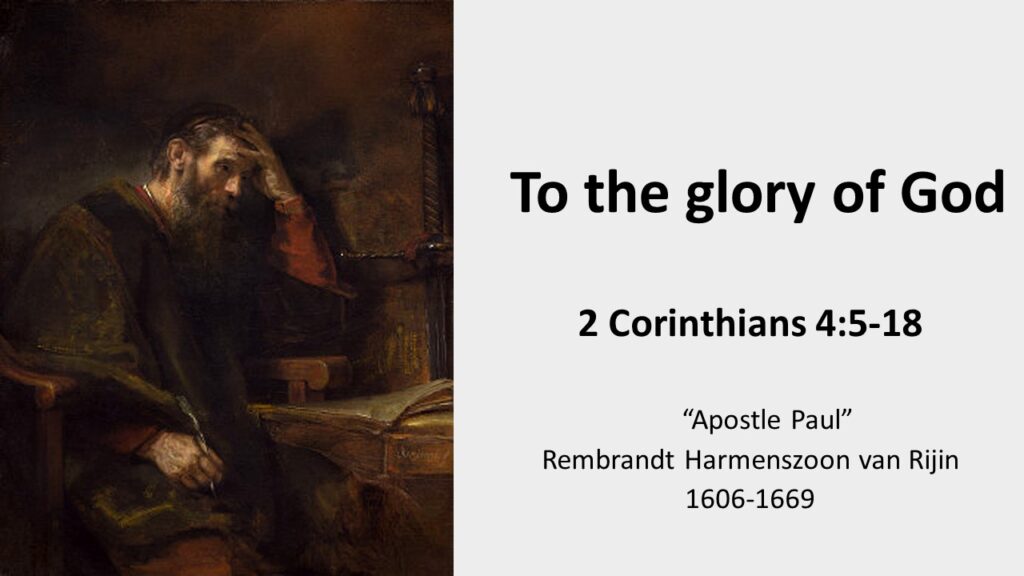 It’s hard to know what to say on my last Sunday in this pulpit. I appreciate the privilege of having been able to proclaim God’s word to you in sermons, in the classes I’ve taught, in addition to the conversations I’ve had with many of you over the past six plus years. It’s always a pleasure to attempt to open up a bit about what God might be doing in the world. God is active even now in our midst. We are a people who live by faith in a God whose glory often remains hidden, but we trust the Lord because of what we know about God through Jesus Christ.

I went back yesterday and looked at the first sermon I preached from this pulpit. My text was Revelation 1:4-8. Yes, I started at the end of the book, it’s a bad habit of mine. I recalled a sermon Sam Henderson, your interim pastor, had preached a few weeks early. Sam claimed there was no perfect pastor. I thanked Sam for lowering the bar. But you know, he’s right. None of us are perfect. Nor is it about us, me, or whoever is standing in this pulpit. It’s all about the glory of God as revealed in the truth of Jesus Christ. Our purpose is to proclaim that truth.

Today, I’m using a passage from Second Corinthians. Of the letters we have in the New Testament, Paul wrote more to the Corinthians than to any other church. He also spent a year and a half in Corinth, ministering to the people there. He wrote at least three letters, although only two survive, both of which are in the Canon of Scripture.[1]

Paul has been held in high esteem over the centuries. He’s responsible for much of the New Testament. But if you read his letters you get the sense that not everyone appreciated him during his lifetime. We joke about Paul putting people asleep during his sermons, but then I’m sure most of you would be asleep if I tried to preach through the night and into the early morning hours.[2] But Paul was also questioned over his authority. While he was called by Jesus on the Damascus Road,[3] Paul was not one of the disciples who was personally with Jesus during his ministry. There were tensions between Jewish believers and Paul,[4] who was called to the Gentiles, as well as tensions between Paul and other missionaries.[5]

There were also other unknown conflicts Paul had, including one in Corinth, which must have been painful both to Paul and to some within the church.[6] In this letter, Paul encourages the church to forgive this individual, while defending his role as an Apostle of Jesus Christ.

For Paul, such things are not to be taken personally, for in doing so could diminish God’s glory. Everything is to be done with God in mind. This is why Paul makes such a strong case for depending on God’s strength. As humans, we’re limited. We are frail. We fail. Like Paul realized in his own situation, there may have been things I said and done that have offended some of you. For that, I’m sorry. It’s not an excuse, but I also realize it’s a part of who we are as creatures. We’re not perfect, which is why we are not to be boastful about what we’ve done, only about what God has done and is doing through us. Humility must rule in the life of a Christian.

In the seventh verse, Paul speaks of treasure in clay pots. In Paul’s day, clay pots along with baskets were the main thing people had to store stuff in. Today, we have cardboard boxes—right now in my office and home, there are a hundred or more such boxes. Like the clay pots of Paul’s day, cardboard boxes are not valuable. They’re cheap and expendable (but I hope you recycle them). Cardboard boxes protect that which is inside, which may be valuable—my books and the china.

Paul uses clay pots (and we could use cardboard boxes) as a metaphor for flesh. Boxes and pots can be easily broken and destroyed, just like our bodies. But there is one thing important about our bodies, it’s in the body that we experience God’s grace and glory. Just as it was in the flesh that Jesus came to us. As frail as we may be, and as flawed as we may be, God sees something of value within us and works through us. The treasure that Paul speaks of is the light of the knowledge of the glory of God.[7]

Anything that we do that’s worthwhile isn’t because of our own power and strength, knowledge and wisdom. It’s because our Creator has given us such abilities. Paul’s point is that anyone looking at him would not think he was capable of being the world’s greatest missionary, and they’re right. He was not capable, but with God working through him Paul was able to do incredible things.[8]

After speaking of clay pots, Paul moves into a powerful set of contradictions in verses 8 and 9:

Paul leaves no doubt that any success he’s enjoyed did not come from him, but from God! Paul may have said this because other teachers have come along and claimed to be superior or to have better gifts than Paul. But Paul isn’t having any of that. He can do what he can do, because of God working through him.[9]

This long section of the letter, which began back in chapter 2 with Paul saying he forgave whoever it was that had abused him, now comes back to the idea of God and God’s mission of which Paul, like us, is just a vessel. My purpose here, as it has been at every congregation I’ve served as a pastor, is not to proclaim greatness, but to humble myself before you and God and point to God as revealed in Jesus Christ as our only hope in life and death.[10]

In verse 16, Paul moves from his defense of himself, to include everyone when he says, “So we do not lose heart.” Paul’s not just be writing about himself here, he’s writing about us all. And he reminds us that our hope isn’t in this life, which is temporary, but in the life to come, a life with God who is redeeming heaven and earth. Paul would never say that our work here is not important. It is, because we are working with God to redeem a fallen world. And it’s not our abilities that make our work important, but our Creator, the one who has redeemed us and who works through us to spread this message.

So friends, my message to you today hasn’t changed any since I first preached here over six years ago. Keep your eyes focused on Jesus. Be a light and a beacon for him. May your actions be worthy of him and your words be uplifting and loving. Yes, we live in a mixed-up world with lots of trouble, but that’s no excuse for bad behavior, for while we live in this world, we live for the world to come. Love everyone, extend grace to all, be quick to forgive, and humble yourselves before the God who has created you, who redeems you, and who sustains you. Amen.