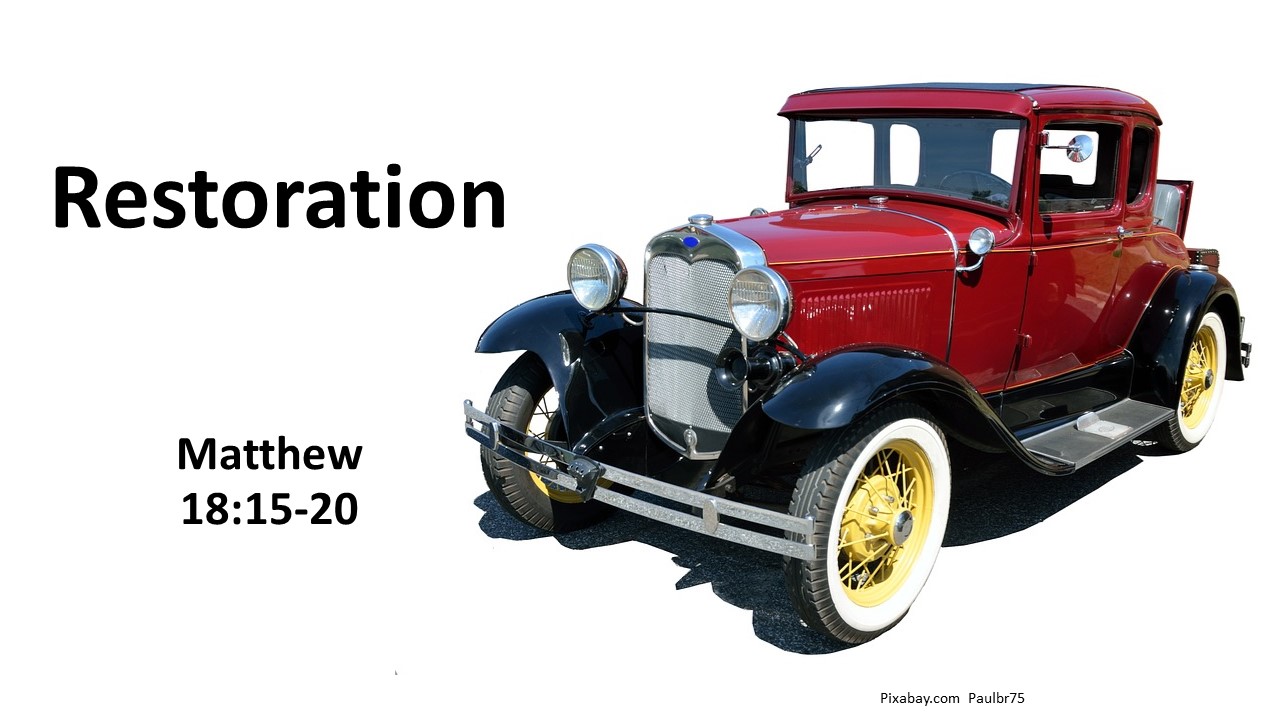 Also, it seems I wasn’t the only one to come down hard on gossip this week. Even the Pope joined the chorus in his Sunday address. Click here for the AP article.

At the Beginning of Worship:

Technology has brought a lot of changes to our world, good and bad. On the positive side, it allows us to continue holding worship services during a pandemic, something that wasn’t available during the 1918 pandemic. But it also means everything is now more public, out in the open. Even things we might have hoped to do privately gets posted across social media for the world to see.

The downside of technology includes social media being filled with folks ready to attack anyone who might not agree with them. We’ve always had such people, but they used to easy to avoid. It’s amazing how people will attack others publicly, be it their food choices, their politics, or their use of grammar. Those who engaged in this manner think they’re doing something righteous when they blast an opponent. They think they look good and have power.

But is this how a Christian should act? Not according to the Scripture text we’re examining today. In fact, even when someone else is in the wrong, we need to go the extra mile to protect their identity, to show love, and to act with humility.

I always admire those folks who can take bucket of rust and, with hard work, restore the car to where it looks like it just rolled off the assembly lane. It takes time, patience, expertise, and a willingness to get one’s hands dirty. But what beauty can come out of such efforts.

Today’s sermon is about restoration. Not of cars, but of people. As Christians, we are not only to be about making ourselves betters, but also others.

Our passage from the 18th Chapter of Matthew speaks of correcting the sins of our brothers and sisters in the faith. Let me warn you, this is an easy passage to abuse. If we’re to be correcting sin, we need to first remember we’re all sinners. Second, we are dishonest if we only correct those sins we find most grievous or only the sins committed by those we dislike, while ignoring the sins of those we like. Remember, Jesus said something about us getting the log out our eyes before removing a speck from someone else’s.[1]

Pointing out the sins of others is something few of us want to do. That’s probably good. In the book The Peacemaker, which is mostly based on this passage, Ken Sande suggests those eager to go out and correct others are probably not the ones needing to perform such tasks.[2] The person who sets out to correct another needs to be humble and desiring both to restore the other person back into a relationship with Christ as well as to keep the publicity down. We’re not to try to make ourselves look better while making others look bad. That’s not Christ-like.

Like restoring an automobile, restoring relationships is hard work. It requires wisdom, love, gratitude, and humility. Without such gifts, one is liable to make a mess of things, just as having the wrong tools could ruin a car’s restoration. Without humility, we can make a mess of a relationship.

Now look at this passage. It starts with a difficult verse. Verse 15 is generally translated “if your brother sins against you…” The New Revised Standard Version translates it more to the intent of the original when it says if “another member of the church sins against you.” Matthew uses the word brother to imply all who are a part of the Christian fellowship, not just siblings or just men. The question that arises is whether we have the right to go correct others in sin.

If you take this passage as translated, the text implies that you go talk only to those who sin against you. Yet, almost all translations will have a footnote here, informing us that many of the older text omit the “against you.”[3] In such cases, it sounds as if we have a license to go correcting anyone who is in violation of God’s law. Since we’re all sinful at one point or another, the field is ripe for a harvest.

I’m going to do something maybe a little unorthodox and take both positions. If your brother or sister in the faith does something wrong against you, you are supposed to go to him or her. In other words, the harmed or the innocence party is supposed to make the effort to reconcile. Image that! My tendency, and this is probably true for most of us, is to avoid people who harm me, but that’s not what we’re being told here. And the object of the visit is not to beat up the offending party, but to restore them. We can also look at this verse from the angle of church discipline. Taking this verse to read: “If your brother does something wrong, go and have it out with him alone,” as the New Jerusalem Bible translates it, we’re told to confront those whose sins are so bad that they are harming the church of giving God a black eye.

Regardless of whether you think this passage applies only to sins committed personally against you as an individual or to sins in general, we’re not given a license to become intolerant moral police officers. Look at the context of this teaching. Right before here, in verses 10-14, Jesus gives the Parable of the Lost Sheep. The focus there, as in this passage, isn’t confrontation. It’s reconciliation, bringing the lost back into the fold. Then he follows this passage with the Parable of the Unforgiving Servant. Remember that passage is about judgment upon those who act harshly and are judgmental toward others. Having these two passages as bookends reminds us that Jesus is primarily interested in restoration of the sinner and that if we’re involved in bringing about such restoration, we’re to be humble and gracious.

We need to ask ourselves if the offense is great enough to risk ruining a relationship. Sometimes, having a little thicker skin will do wonders and further the peace.

If, however, the situation requires action, we’re to go to the other person and confront them face to face; we’re not to be talking about it to others, starting up the gossip mill. Today, thanks to social media, starting a rumor is easier than ever. But before we announce to the world the wrong someone has done, we’re to go talk to them. We’re to listen to what they say, for they may have a different interpretation or understanding.

Listening is important. We might have missed understood. Furthermore, if Jesus were teaching today, I think he’d insist that we listen and gather the facts before we march off into a crusade. As for social media, he would probably suggest that before we share something online, we make sure what we say is supported by facts and are not just emotional responses that demonstrate our own confirmation bias.[4]

After having confronted the person face to face, if they are not willing to work things out or if they are going to continue sinful activities, we’re still not to start gossiping. We’re to maintain confidentiality as we attempt to come to an understanding with two or three others, who are trusted and will also keep confidentiality. In Sande’s book, he recommends that if we’re in a conflict with someone else, we tell them at the end of that first meeting that we’re going to seek the council of others—for if they know they’re in the wrong they may be willing to go ahead and work things out with us.

These two or three witnesses serve two functions.  First, they are observers. Judgment in Scripture always required two witnesses.[5] In this case, they are there to make sure that things are fair. They might listen and think we’re the one that is in the wrong and, in that case, we have to be willing to accept their advice.

After this second visit, if we still don’t resolve the problem, then we can take our complaint back to the church. In keeping with the process, this doesn’t mean that we stand up during joys and concerns and broadcast the complaint to everyone. Instead, we take it to the leadership, to those in charge, and let them be the judge. Only after this intervention fails, does the church have a right to exclude the offending party from the community of faith. Matthew says that then they’ll be like “pagans and tax collectors.”

What are our responsible toward correcting a member of the community who sins, remembering that we all sin? This was debated heatedly during the Reformation. John Calvin, one of the founders of our branch of Christendom, supported Church discipline for three reasons.[6] First, was to honor God. The church should act against those who are in open revolt against God. But Calvin did not suggest we start inquisitions. He never argued for a “pure church” because he believed that was impossible. Church discipline was taken only against those who openly refused to stop and repent of their blasphemous activities. The second aim was to keep the good within the church from being corrupted, and the third aim was to bring the guilty party into repentance.[7] Discipline was always carried out in hopes of restoring the contrite into the fellowship of the church. In other words, discipline was done pastorally out of concern for the accused soul.

When we take these verses out of their setting, they sound harsh. After all, Christ gives those of us in the community the power to banish someone from our midst.[8] He even tells us that decisions we make here have eternal ramifications. But our purpose isn’t to be the enforcer; instead our goal is to restore the sinner. And if we’re going to be convincing, we got to remember that we’re all sinners, which means we better be humble in any endeavor we undertake.[9] We don’t try to correct others as a way to prove our rightness, but out of love and concern. Like restoring a car, it’s hard work. Amen.

[3] There is debate over the inclusion of this phrase.  See Bruce Metzger, A Textual Commentary on the Greek New Testament (United Bible Society, 1985), 45 and Douglas R. A. Hare, Matthew: Interpretation (Louisville: John Knox Press, 1992), 213.  Robert Gundry argues for its inclusion in Matthew: A Commentary on his Literary and Theological Art (Grand Rapids: Eerdman, 1982), 367; while Frederick Dale Bruner omits the phrase.  See The Churchbook: Matthew 13-28 (Grand Rapids: Eerdmans, 2004), 225.

[4] Confirmation bias is agreeing with something because it “fits” our world view without verification. In other words, we decide something is right because it fits our existing beliefs.

[6] Although Calvin supported and participated in church discipline, unlike some Reformers such as John Knox, Calvin did not see discipline as one of the marks of a “true church.”  To him the marks of a true church was the proclamation of the gospel and the rightful administration of the sacraments.  For a discussion of Calvin and discipline, see Charles Partee, The Theology of John Calvin (Louisville: W/JKP, 2008), 270-271.

[7] The three purposes of discipline of John Calvin are in his Institutes of the Christian Religion, IV.12.5..

[9] Heimlich Bullinger, another reformer and author of the Second Helvetic Confession tempers his talk on discipline with a reminder that Jesus said not to pull the weeds up because you risk pulling up the wheat.  See Presbyterian Church (USA), Book of Confession. 5:165.

9 thoughts on “Restoration of a Sinner”