Notes on the Kirkin’ o’ the Tartans 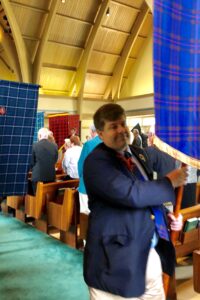 Is the Kirkin’ o’ the Tartan, an auld Scottish Rite? Many people are under assumption that the “Kirkin’ o’ the Tartan” is an ancient Scottish Church Ceremony. Actually, nothing could be further from the truth. While based on Scottish legend and folklore, this ceremony is distinctly American. It traces its roots to the life and ministry of The Reverend Dr. Peter Marshall, a Scottish émigré. Dr. Marshal was a prominent minister in the Presbyterian Church, who served as the Chaplain to the United States Senate at the advent of World War II. In April 1941, while serving as the Pastor of the New York Avenue Presbyterian Church, Dr. Marshall titled one of his sermons “Kirkin’ o’ the Tartan.” This name soon became attached to church services that celebrate with pride their Scottish heritage. While more commonly celebrated by Presbyterian and Episcopal Churches, today this celebration is utilized by a variety of Christian denominations for Scottish heritage events.

What was the origin of the Tartan? The exact origin of the Scots’ love of the tartan is shrouded in the mists of ancient times. According to one common and widely held legend, St. Margaret introduced the use of the Tartan for clan identification purposes. This was a way of achieving unity (a rare commodity in Scottish History) within diversity. The use of the tartan in a generic sense was for all Scots. The particular designs for clan and familial identity did not begin, however, until the nineteenth century. Margaret was a gentlewoman of noble birth, who planned a religious vocation. She was persuaded, however, by Malcolm, King of Scots, to become his queen. Malcolm was a boorish man; he was uncultured and illiterate. Margaret softened his harsh ways, and led him to be a better king. It was said of Margaret that she “admonished the wicked to become good and the good to become better.” She remains a revered figure in Scottish history. 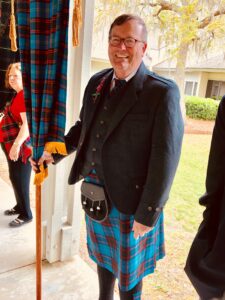 Why was the tartan banned? The Scots and the English are very different people, with different cultural origins and different traditions. Even today, a Scot may speak, with a twinkle in his eye, of England as “the auld enemy.” During the long course of Scottish history, the Scots and the English were to make war against one another many times. For the Scots, there were times of freedom, beginning with the revolts of William Wallace and Robert the Bruce, and times of subjugation. The last Scottish rebellion began in 1745, and ended in 1746 with the Battle of Culloden Moor, wherein the Scots led by “Bonnie adopted a policy of “cultural genocide.” This was known as the “Act of Proscription” of George II. The wearing of the kilt, the use of the Gaelic language, the ancient “clan system,” and all other elements of Scottish culture and nationalism were banned! These acts were meant to strip the Highland Scots of their cultural attributes, which further distanced them from their English speaking conquerors. While these bans remained in effect, memories of “things distinctly Scottish” were all but lost. Like warm embers from a long-dead fire, these Scottish traditions remained alive only in the memories of ancient grandparents. According to legend, during these trying times the Scottish people would secretly carry a small piece of their clan’s tartan to church on Sundays. Thus when the minister ended the service with the Benediction, that tartan was blessed and God’s favor was bestowed upon the Scottish people. King George III repealed the Act of Proscription in 1782. It was not until the 19th Century and the Reign of Queen Victoria, however that a renaissance of Scottish culture began. The Queen, strongly influenced by the romantic writings of Sir Walter Scott, sought to revive the wearing of the kilt and other Scottish traditions.

Why is the St. Andrew’s Cross Flag a symbol of Scotland? A white “X” shaped cross upon a blue field is known as the St. Andrew’s Cross flag. This standard is a symbol of Scotland. St. Andrew was one of Christ’s disciples. Andrew (known from only eight passages of scripture) is one of the more appealing figures of the twelve apostles. He seems to have possessed a boundless enthusiasm for bringing people to meet Jesus, yet he was content to remain in the background. According to a Christian (probably apocryphal) legend that dates from only the 14th Century, Andrew was executed. He was bound to a “Cross Saltire” (i.e: an “X” shaped cross) and crucified. In the 4th Century, some believe, his relics were transported to Scotland. St. Andrew is considered the patron saint of Scotland. St. Andrew’s Day dinners are commonplace among those who love Scotland, including the tradition of cooking “X” shaped shortbread cookies.

Why is the Rampant Lion Flag used at Scottish celebrations? A flag featuring a red “lion rampant” upon a yellow field is the royal ensign of Scotland, and thus used on state occasions when royalty is present. This royal standard is also flown from government buildings on official occasions. This flag, however, has recently been approved by the Lord Lyon for use at Scottish heritage and athletic events. 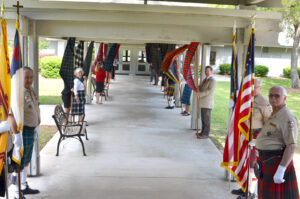 Why is the thistle a symbol of Scotland? Once upon a time, a long long time ago, the Scots were about to be invaded by their “auld and ancient enemies,” the Vikings. Once they landed, all Scots knew the Vikings would be hard to stop. If only their landing sites might be located, however, there was the slim hope that the Viking warriors might be stopped on the landing beaches. Alas, a fog drifted into the area and the Scots gave up all hope of identifying the invasion site. About this time, a barefooted Viking warrior set his foot upon a thistle and gave forth a loud cry. The Scots then rushed to the sound of the footsore warrior, and defeated the Viking force. Thus, it might be said that the thistle, a lowly weed, saved Scotland! As the Welsh revere their leek, the Scots revere the thistle. The thistle was used by the early Kings of Scotland as their personal heraldic crest and is borne by the Arms of the Realm and by a number of ancient Scottish Clans and families as a part of their individual coats of arms. In 1687, James II instituted the Order of the Thistle as a distinctly Scottish order of Knighthood. This order is now the oldest of all surviving British Orders.

Why are there drawings of wild geese on some ancient Christian drawings from Scotland? The wild goose was the Celtic symbol of the Holy Spirit. Perhaps it was the freedom of the wild geese that stirred the island-bound imaginations of the folk who lived in coastal Scotland to think of the Holy Spirit in this manner. 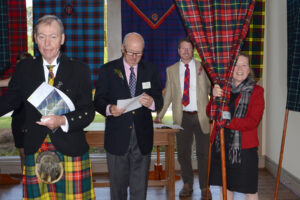 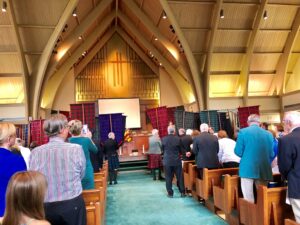 What is a “Beadle,” and what service did he render the Kirk? During the Middle Ages and through the reformation, Bibles were rare among the common people. The Bible of the Kirk (i.e. the Church) was a treasured possession. The intrinsic value of the Holy Scriptures and the ever present possibility of theft led to the establishment of a special lay office known as the “beadle.” The beadle was usually elected by the Kirk Session, and he served for an indefinite period of time. The chief duty of the beadle was to preserve and protect the Kirk’s Holy Bible. His other duties sometimes included collecting fines, the summoning of accused parties to trial (before Session Court), and the issuing decrees of the Kirk throughout the parish. In some traditional Presbyterian Churches today, the beadle begins the worship service by carrying the Holy Bible ceremoniously into the sanctuary. On such occasions, the people rise in respect for the Holy Book and its Scriptures. The parishioners take their seats after the beadle has opened the Bible and prepared the pulpit for the advent of the minister. 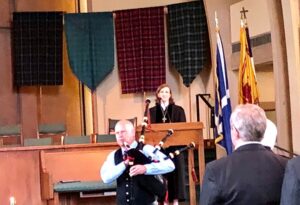 Why are Psalms sung during the Scottish Heritage Worship Service? The Scots were among the last Christian Churches to adopt the singing of hymns! Until recently, the members of The Kirk sang only metrical Psalms for their church services. Indeed, the singing of hymns was considered by more than one wizened old Scot as the “invention of the devil.” Metrical Psalms are Psalms slightly altered to fit the meter of the melody. The musical psalms for today’s worship service are metrical Psalms, or music inspired by a particular Psalm. In the 18th and early 19th Centuries, American Churches along the frontier did not have Psalters from which to sing. They would have a literate person, known as the precentor “line” the Psalm. This leader would sing one line of the Psalm, and then the congregation would follow singing the same line. Then the leader would sing (or “line”) the second line. This procedure would continue until the entire Psalm has been sung. If there was no sermon on that day (as ministers were rare on the frontier), the worship service was simply known as a “Sam Sing” (sic.). Psalm 23, set to the tune “Crimond,” deserves special note. It is to the Scots what “God Bless America” is to Americans. It is sung at almost all memorial occasions in Scotland.

For the original publication of these notes, click here.

6 Replies to “All You Need to Know about the Kirkin”