With pomp and circumstance, along with fireworks, hot dogs, watermelons, sunburns, and thunderstorms, we celebrated our Nation’s birthday on Thursday, Independence Day. But what does freedom mean? What are the limits on what I can do as an individual? When does my freedom impinge on yours, or yours on mine?

You know, we must realize our forefathers and mothers weren’t perfect back in 1776. It’d take another three-quarters of a century before slavery ended. And, of course, the end of slavery was just the beginning.  As Frederick Douglas said just after Lincoln issued the Emancipation Proclamation: “A slave will yet remain in some sense a slave, long after the chains are removed from his limbs,”[1] Just because you’re free of chains doesn’t mean you’re truly free. Jesus teaches us this, also, as we’ll see this morning.

Jesus talks a lot about freedom in the gospel of John, but does his views of freedom mesh with what we celebrated on Thursday? What does Jesus mean when he says to his disciples that they know the truth and the truth will set us free? And, for something to think about, what does this freedom mean when compared to the Apostles’ Paul call for us to be a slave of Christ?[2] Read John 8:31-36.

Few ponder freedom more than those in prison with long days and nothing to do. Although few succeed, some spend their time creatively, attempting to obtain freedom. There were these two dudes at the Texas Correction Facility in Huntsville, who planned and watched and finally figured out if they could just crawl into the back of a delivery truck, they could possibly make it out. From observations, they learned there was this one truck that wasn’t checked as thoroughly as others. They jumped in the back, hoping they weren’t seen. Soon, the truck was beyond the walls of the prison and rolling down the highway. They waited until the truck stopped and parked. They slipped out. To their horror, this discovered they were inside the walls of another Texas prison.[3] Just another example of jumping out of the frying pan and into the fire.

We may find this story funny, but isn’t it also a parable of life? Desiring a better situation, we come up with a promising scheme only to find us back to where we started, or in another equally bad situation? Yet, the desire to be something more is intrinsic within the human race. It fueled the revolution that lead to the foundation of our nation in 1776. It encourages all kinds of escapist plans and schemes, some of which are good and others which take us down the wrong path with promises for more than they can deliver. Such schemes will never fulfill us. 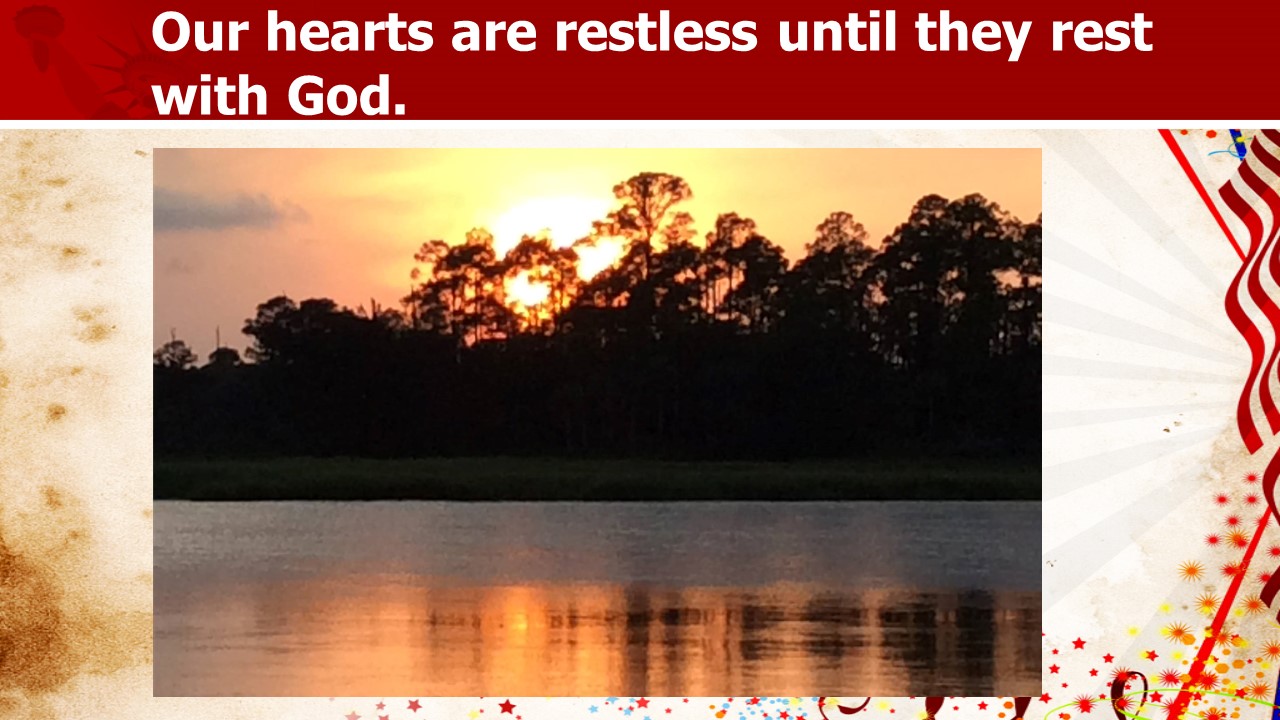 We have been born with a desire to find true communion with God, which makes other substitutes for God unsatisfactory.  As I have said many times, quoting Augustine, “our hearts are restless until they rest with God.”[4]

The gospel of John, like Augustine, makes it clear that we will never be satisfied with our lives until we come to God through Jesus Christ. Until then, we’ll be like those two Texas inmates, going from one prison to another. We need to break such cycles, and that’s what our Savior offers us. 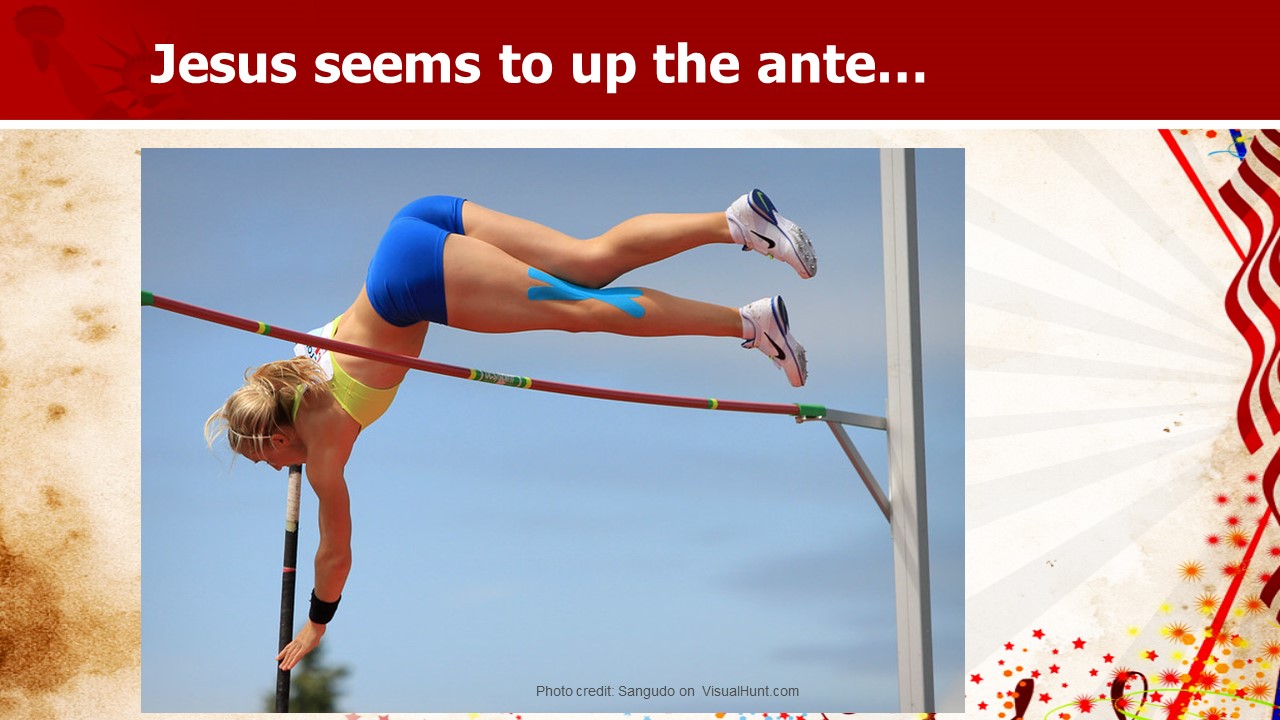 Our passage begins with Jesus in the presence of some folks who had believed in him.[5] We don’t know what happened, why they stopped believing. Maybe it’s because Jesus is often upping the ante for those interested in him. Luke tells us about the rich guy who came to Jesus, bragging about how he has kept all the laws and wanting to know what he needed to inherit eternal life. Remember his answer? “Sell all you have, give it to the poor, and come follow me.”[6] I think Jesus always raises the bar to ensure we’re following him for the right reasons. Are we following him because of who he is or what we hope to get out of him?

In our passage for today, Jesus tells those who had believed in him, that if they continue abiding in his word, they’ll be his disciples and if they know the truth (which is him), they’ll be set free. As it was with the rich man, Jesus always seems to demand what we hold most precious. For the rich young man, it was his wealth. For these guys, who had followed Jesus, it’s their pride. Telling them that the truth will set them free implies they’re slaves. This strikes a sour note. They are proud to be children of Abraham. There’s a humorous irony here. As individuals, they may not be slaves, but they are not citizens of Rome. Therefore, they were less free than the American colonists were in the 18th Century under British rule. Israel has been under Roman domination for nearly a hundred years at this point, and was dominated by other nations before Rome. Israel hasn’t been free for centuries, going back to these dudes’ umpteen great granddaddies.

Of course, Jesus is not speaking of political or physical freedom. And those who are listening don’t understand this. He’s using the word metaphorically, to show the power of sin to control and enslave us. In order to redirect their focus, Jesus tells them that everyone who sins is a slave to sin!

Let’s take a poll. Who here sins? (Raise your hands.)

Did you hear what Jesus said? If you sin, you are not free. We’re not free. Sin grips us in its bondage. Sin is like potato chips. Remember those old commercials about how you can’t just eat one? Think of sin such as when you were a child and told a lie? Then you had to tell another, to cover that one up. Then another. Sin traps us in bondage. For someone in such a situation, Jesus’ offer for us to stick with him is gracious.[7] Of course, these guys don’t get it. They think they’re doing a pretty good job obeying the law, avoiding the most grievous sins, and having Abraham on their sides. They feel pretty good about their situation. After all, if it was good enough for their parents and grandparents, it should be good enough for them.

Jesus challenges their preconceived notion that just because they’re Abraham’s descendants, they’re not grandfathered in. Jesus is the Son of God and has the right to pardon and free those who are slaves to sin, and then welcome them into God’s family. The catch is this. If you are outside the family, this sounds like a good deal. But if you think you are already inside the family, thanks to Abraham, Jesus’ words are threatening. “What do you mean, Jesus, that this isn’t enough?”

Think of how Jesus’ teaching was understood by those who felt they were already good enough. How would it feel to learn that just being a descendant of Abraham isn’t enough? How would Jesus’ words go over today? Do we in America, who proudly proclaim our freedom, find Jesus’ promise of freedom enticing? Or would we be like first century Jews, thinking that we already free?

Are we? Are we really free? The majority of working Americans work in jobs they don’t enjoy but can’t leave because they have to pay the bills. How free is that? We’re trapped like the miner in Merle Travis’ song, “Sixteen Tons.”  Sixteen tons and what do you get? Another day older and deeper in debt. St. Peter don’t call me for I can’t go, I owe my soul to the company store.” Too many people only work to get things they can enjoy when they are off work. Is this the way things should be? We work, not because we enjoy it and feel called to it, but so we can afford a lifestyle and enjoy a retirement. Wouldn’t our lives be more wholesome if we felt better about work? Wouldn’t we feel better knowing we’ve all been called to help make this world a better place? Wouldn’t it be better to understand that Jesus gives us life and we don’t have to struggle for it, that we just accept it?

Jesus tries to get people to see beyond their own self-interest by shattering our reality. He represents the truth which is not bound by anything in our material world. Jesus represents a greater reality, but can we accept him? If we accept him and live as if he is the most important thing, those things that ensnare us and entrap us may still be a threat, but they no longer have any power. If we accept Jesus and hang with him, we know that whatever happens to us, in life and in death is going to be okay for we belong to Jesus Christ.[8] We are a part of his family. As Howard Thurman, the Civil Rights leader once said, “To be free means the ability to deal with the realities of one’s situation so as not to be overcome by them.”[9]

You know, if we accept Jesus into our lives, we must still pay the bills, go to work, and take out the trash. After all, God created us for work. It’s important that we do what we can to earn our daily bread and to offer up our labors for God to bless. Doing so, we’re freed from thinking what really matters are those things we worry about day in and day out. In the grand scheme of things, they don’t matter. We’re freed from looking out upon the world and seeing it as something to be conquered or earned. That’s not Biblical. Instead, we’re free to look out upon the world and accept it as a gift from a gracious God. And most importantly, we’re free from the guilt and shame of our past. Sin no longer eats at us because we’ve been accepted by Jesus. And, unlike our freedom, Jesus’ offer is something no one can take away.

Jesus is the truth. He shows us the way to the Father. If we accept him and stick with him, we’ll be alright. Let’s do it!  Amen.

[1] Quote used by Brad Braxton in his commentary on John 8:31-38 found on theafriicanamericanlectionary.org, He obtained the quote from William K. Klingaman, Abraham Lincoln and the Road to Emancipation, 1861-1865 (Viking: New York, 2001), 234.

[3] Adopted from a story told by the Rev. Dr. Alan Meenan, titled “That You Might Believe,” preached at Hollywood Presbyterian Church in California in April 2003.

[5] Dale Bruner translates this verse as “those who (previously) had” to capture the strength of the Greek construction and to emphasis these are former believers.  Frederick Dale Bruner, The Gospel of John: A Commentary (Grand Rapids, MI: Eerdmans, 2012), 529-530.

[8] From the first question of the Heidelberg Catechism.