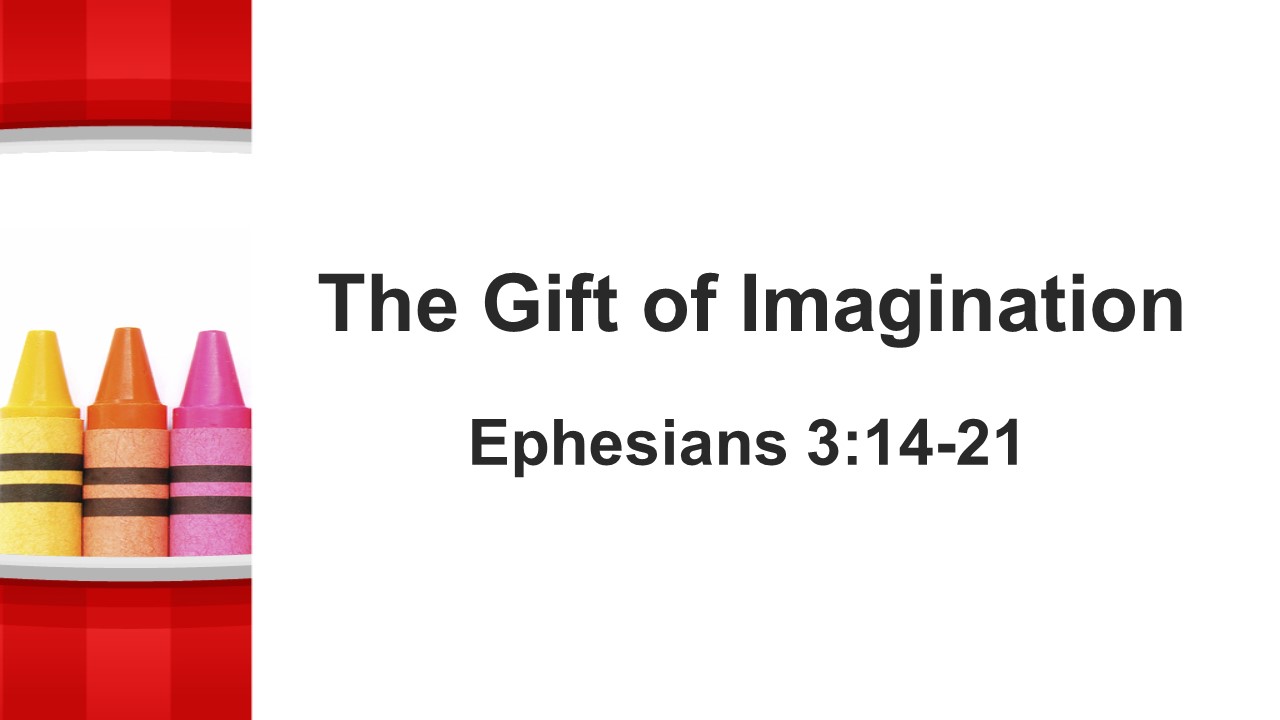 There’s an old story about a pastor making a hospital call with a man who’d been in a terrible accident. The doctors said he’d never walk again. The pastor, along with everyone, else believed the doctors. There was no way his legs could ever again support the man’s weight. But the pastor was berated by the man to pray he’d regain the use of his legs. Being sensitive to the situation, he didn’t want to get the man’s hopes up. But after enough nagging, the pastor finally prayed, asking that the man’s legs be healed. When the prayer was over, the man slid over to the edge of the bed, threw his legs off the side, and sat up. Then he stood and walked out into the hall. It was a miracle. Once, back in his car, the pastor, who felt he had egg on his face, had a long talk with God. “Don’t you ever do that to me again,” he said. 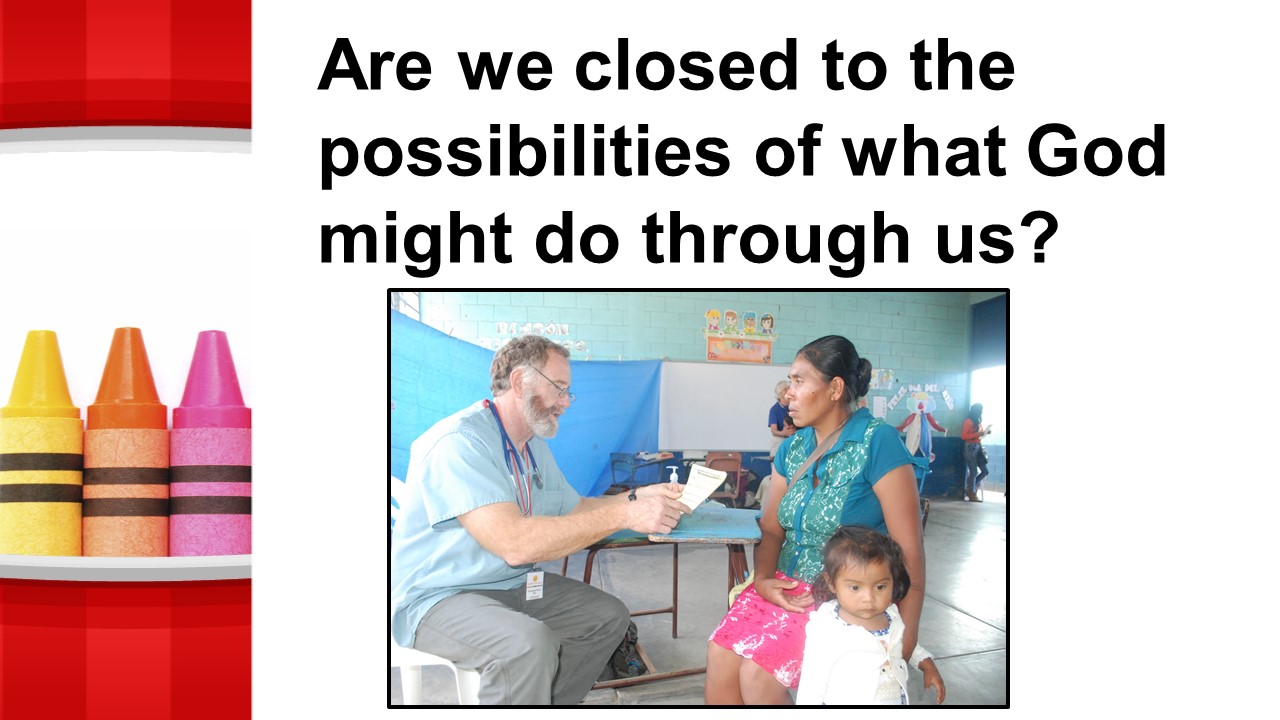 Are we like that? Are we closed to the possibilities of what God might do through us? Are we resistant to the abilities of Almighty God, who can do more than can imagine? Perhaps, like the man in the story, we want to keep God hidden, focusing on ourselves, even though we don’t (by ourselves) have the ability to do miracles? But, you know, when we don’t care who gets the credit, great things can happen. And if it is happening with God, even greater things can happen.

Such healing stories are few and far between in our modern world. But not in the 3rd world. Ever talked with missionaries about the miracles they’ve experienced? It’s as if we have placed all our hope in science and in our advanced society, but those who don’t have the technology only hope is with God. And God often shows up.

We have been created in God’s image, given power to participate with God in the re-creation of the church. We should trust God to help us in this endeavor as we seek to use our creative powers to build a better world. Our reading today is from Paul’s letter to the church in Ephesus, Chapter 3, verses 14 to 21… 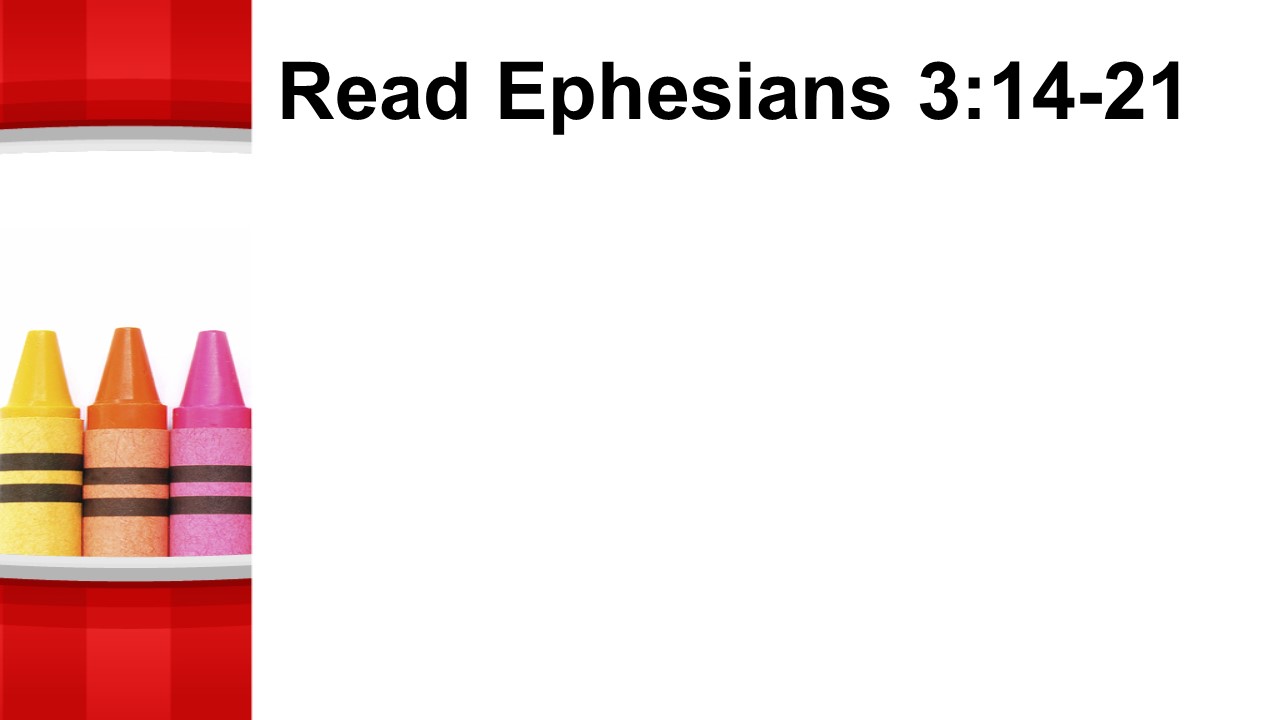 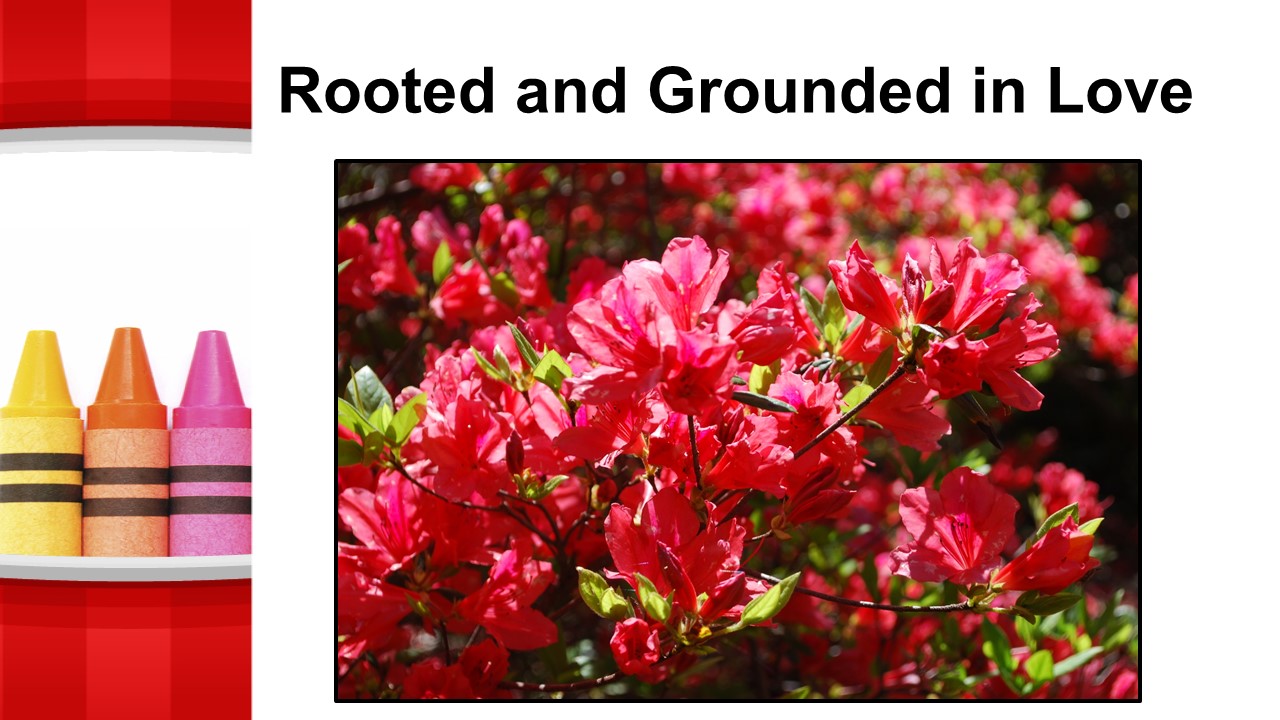 When we moved back to North Carolina in 1966, my parents brought a house on an acre of land. At that time, there was only a little grass and the only shrubs were in front of the house. There was lots of white sand. But my dad had a vision. He brought a few azaleas of various sizes and colors. Some were the large Rhododendron types and others small bushes that came in a variety of colors. From these plants, he began to root azaleas. Out in the back of the yard, under one of the longleaf pines, he nursed these plants in cans till they were large enough to be transplanted into beds. Slowly, as these beds grew, there was less and less lawn. By the time I left home, ten years later, instead of having an acre to mow, it was less than a half-acre. By the time my younger brother left, there was even less yard to mow. I think it was my father’s intention—to have the yard of a manageable size before he ran out of child labor.

But that wasn’t the point of his obsession with azaleas. During the spring, for about three weeks, my parent’s yard was a sight to see. It was the envy of the neighborhood. Mixed into the beds of azaleas were camellias and dogwoods, creating a colorful delight for the eyes.

Paul, in our passage, speaks of us being rooted and grounded in love. Being rooted is an agricultural metaphor.[1] To root an azalea, you take a small limb or branch from an established plant and ground it in new soil, keeping it damp until the sprig begins to spout roots and forms a new plant. Here, Paul is referring to us being taken out of the world and, with love, being transformed into a new creation within the church. This new creation should be like rich soil where the plant can take root. Paul suggests that just as a gardener will have a vision about what’s to be, God has a vision for who we are to be. A beautiful vision! 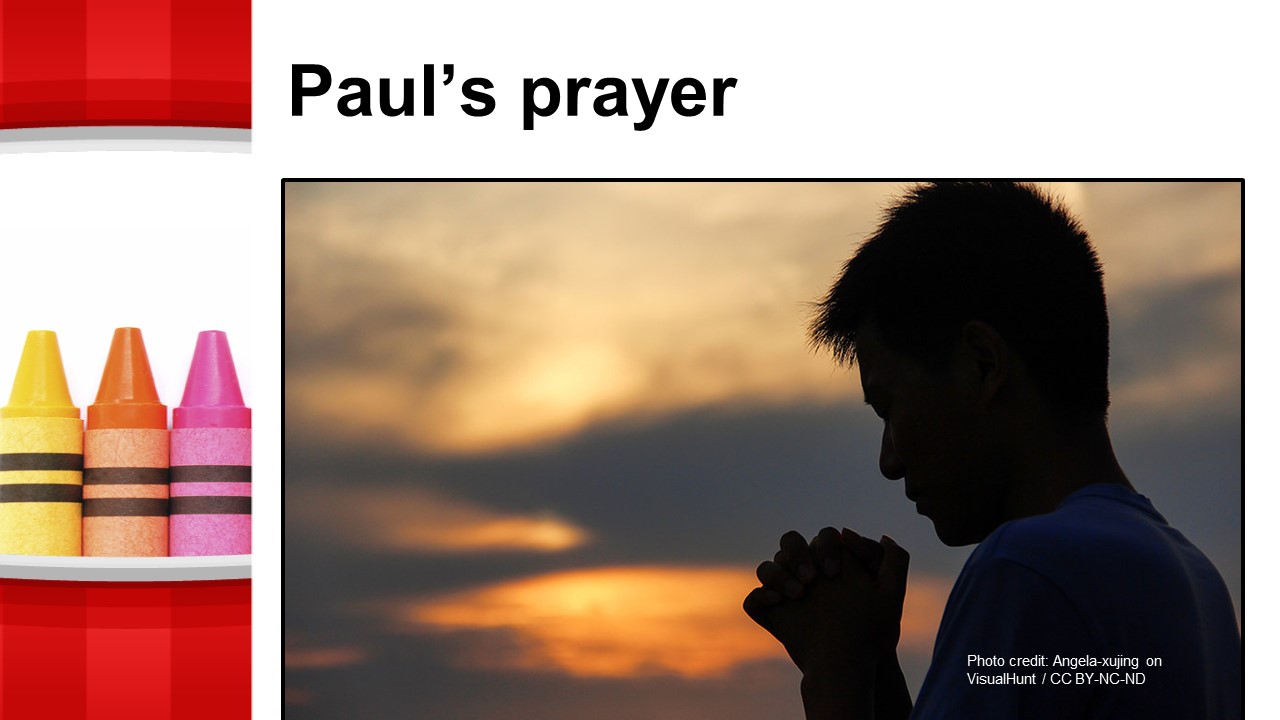 Our reading from the Apostle Paul’s letter to the church in Ephesus is a prayer. Paul prays his brothers and sisters in Ephesus will find strength in God’s spirit and that Christ might dwell in their hearts through faith rooted and grounded in love.

Love is the key to this relationship. In a book titled Love, Medicine and Miracles, Doctor Bernie Siegel writes: “I am convinced that unconditional love is the most powerful known stimulant of the immune system… the truth is that love heals.”[2] Here is a medical doctor who has spent years studying medicine, yet he acknowledges the importance of love in healing. 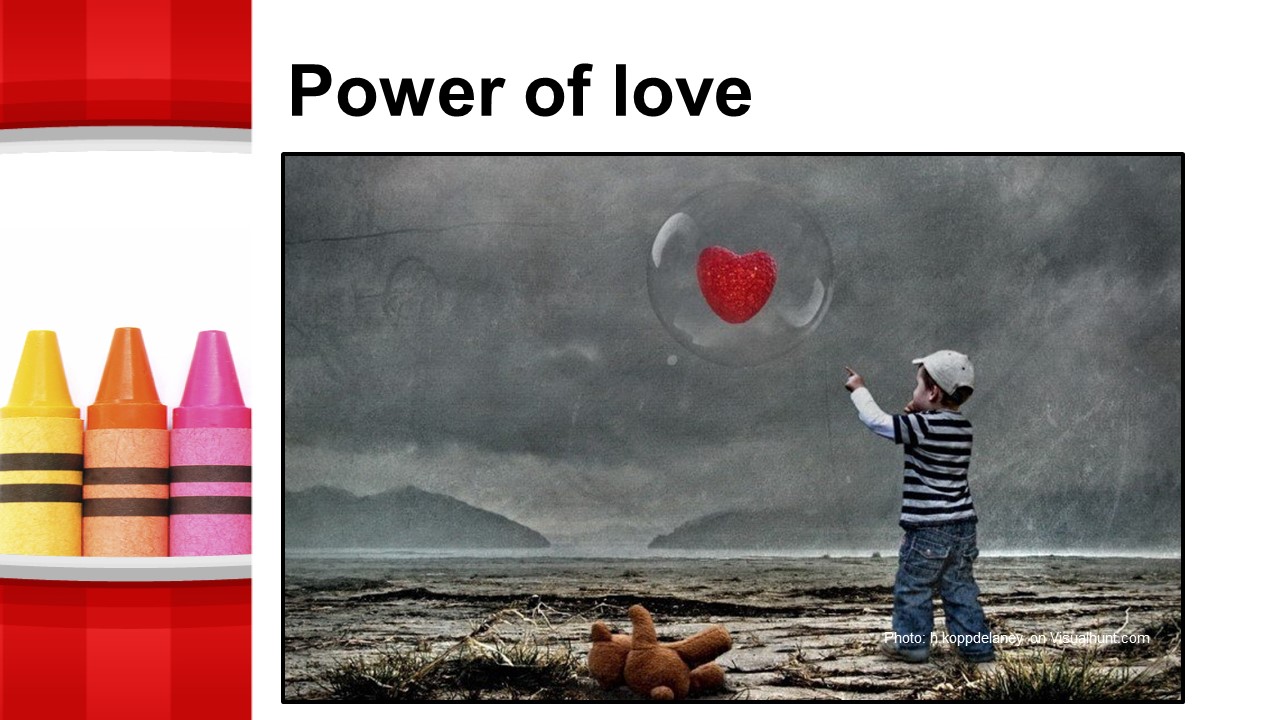 By the way, this isn’t the only place where Paul emphasizes the importance of love. Yesterday, in the Men’s Saturday morning Bible Study, we looked at 1 Corinthians 13, which is known as the love chapter. There, Paul is insisting that the various factions within the Corinthian Church love one another. God loves us, as shown in Jesus Christ, and we are to love one another. It’s as simple as that. Even Sigmund Freud, who isn’t known for his Christian sympathies, said that we must love in order that we will not fall, and if we can’t love, illness will take over us.[3]

If we create a community that really loves and cares for people, we’ll witness people being restored and healed, body and soul.  Granted, not every illness will be beaten. We have to be honest and admit that one day we will all die. But until then, we should be loving and supportive of one another. If so, our lives will be more beautiful and much happier and healthier. This is what God wants for us. This is what the church needs to offer the world. It’s a creative vision often ignored these days. 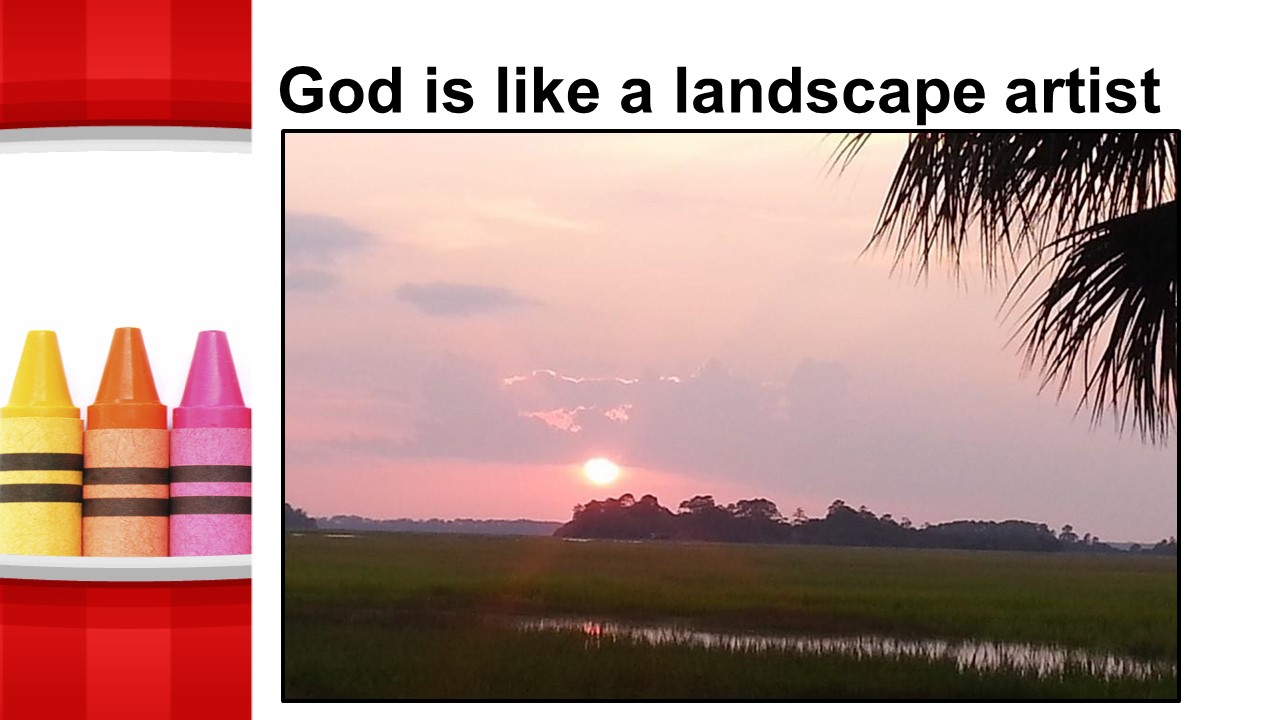 In the 20th verse, Paul appeals to “him who by the power at work in us is able to accomplish abundantly far more than we can ask or image.” This is a wonderful attribute of God: the ability to do more for us than we can ever imagine. Again, God is like a landscaper who can look at barren piece of land and image a lush garden. 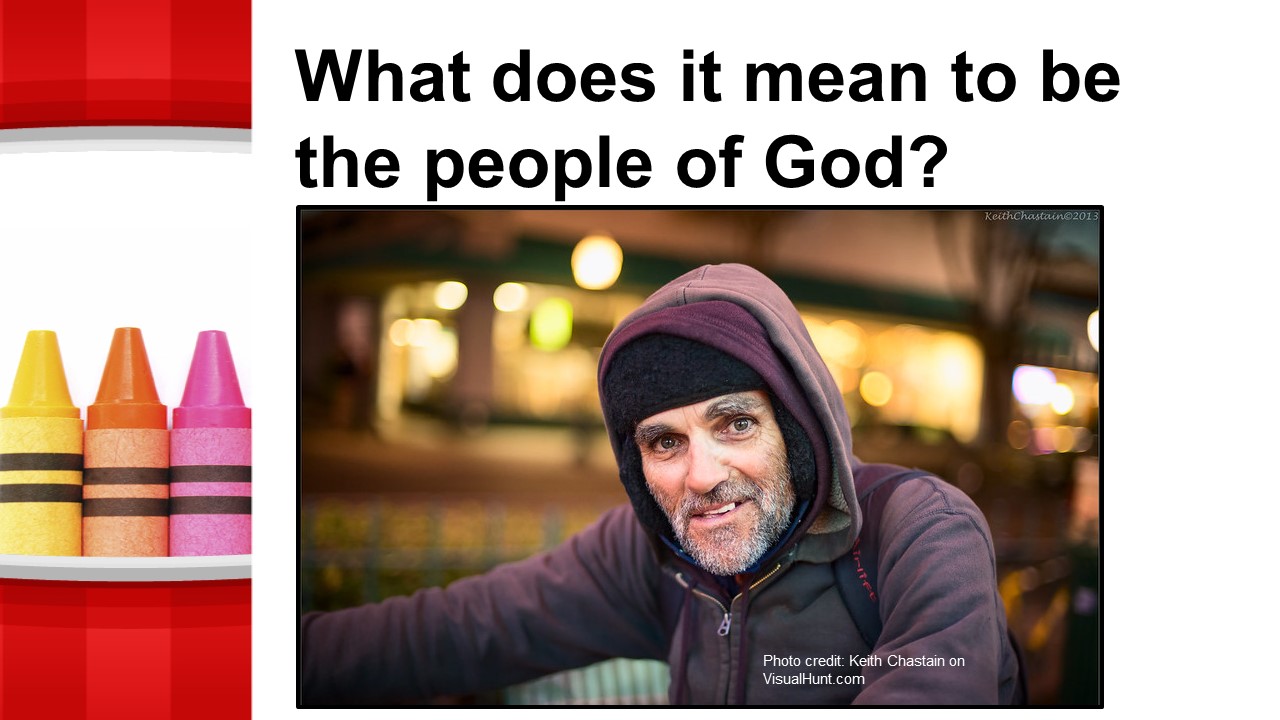 Maybe we, as Christians, need to do more daydreaming about what it means to be the people of God. That’s what this four week study is about. God has endowed in us an ability to image new worlds. But are we willing to join with God in creating them? Or do we limit God by our own lack of imagination. We need to free God to work miracles in our lives, within our congregation and community and within our world. If we trust God, and ground ourselves in agape love, which is the type of love that calls us to work for the best of others, there’s no limit to what might be accomplished. If we trust in God’s power and are willing to creatively join God in working for a better world, there is no telling what might come out of our efforts. But if we act like things depend on what we can do and have no imagination, we risk a dark dystopia future.

Following the promise of what God can do for us, Paul ends with a benediction. A direct translation of what Paul says is simple as we have in verse 21 of the New Revised Standard Version. Although short and simple, the meaning is fuller as The Message translates demonstrates: 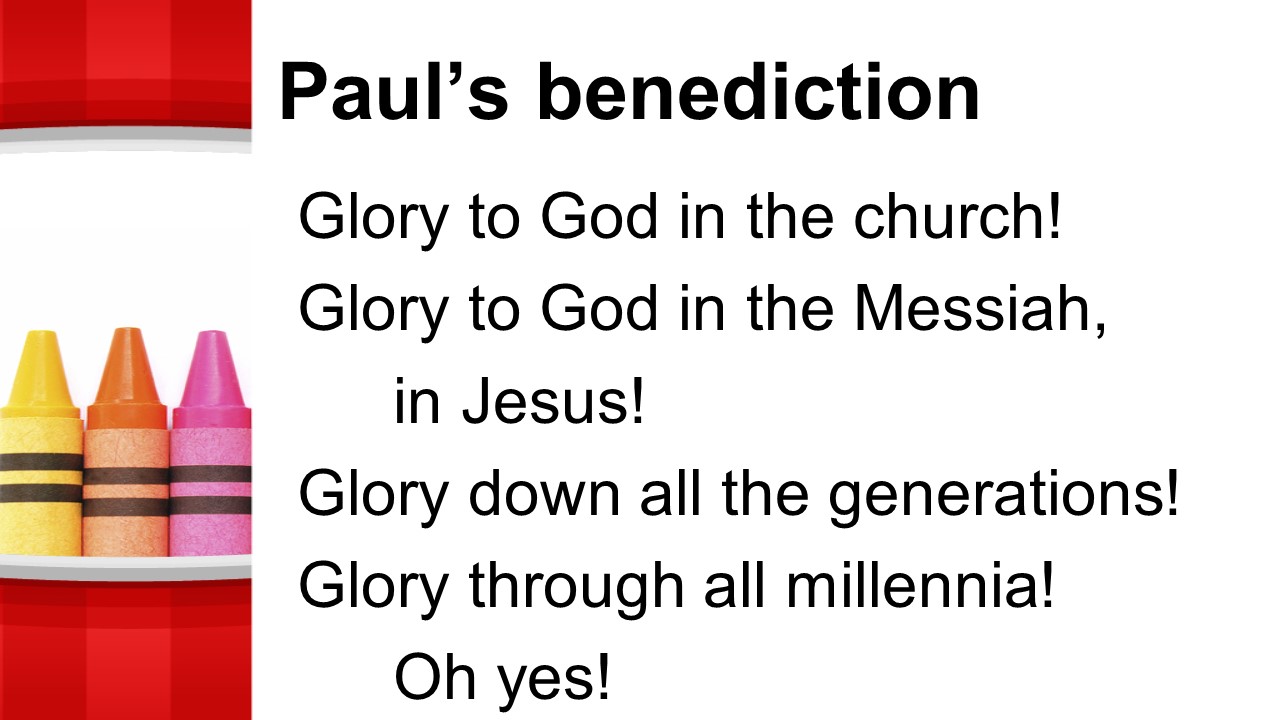 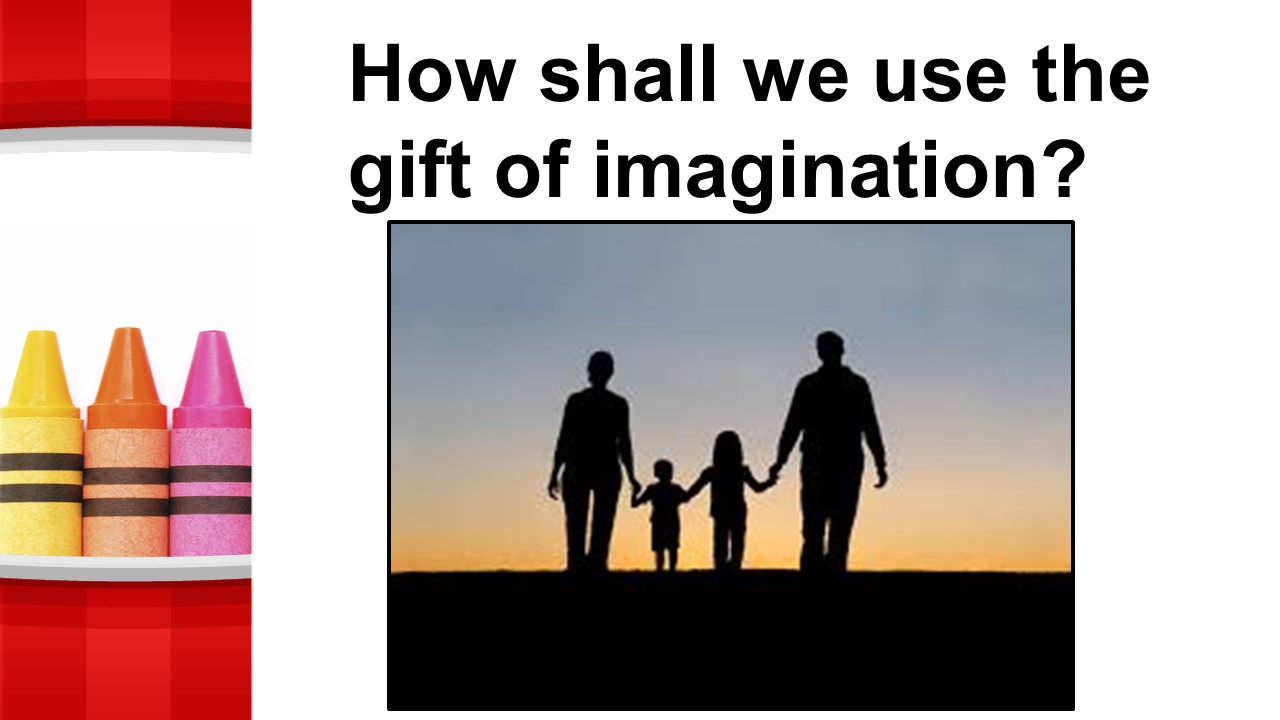 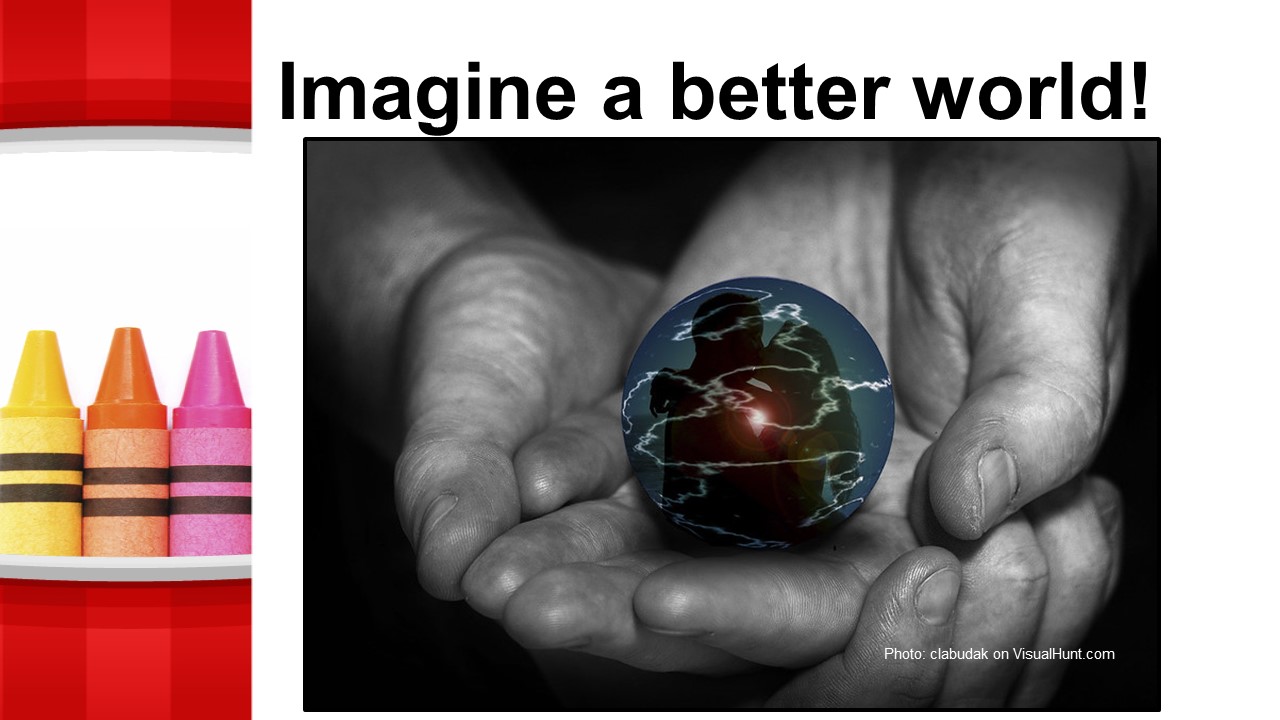 The Israelites in exile were told to seek the wellbeing of the community in which they were living and we’re to do the same.[4] What would it take to re-create Savannah into a community with top-notch schools and business opportunities, where the absence of gunfire at night is noticeable? And while you are working with your imagination, what might our world looked like if we treated everyone with dignity and honor?

If we have, as Paul prays, been rooted and grounded in love, with Christ dwelling in our hearts, we should be about imagining a better world. But don’t stop with daydreaming. For God created us in his image and calls us to work with him to carry out the divine mission. We are saved for God’s work in the world, and each of us are given abilities to fulfill our own calling. What abilities has God given you and how might you creatively use them? Amen.

4 Replies to “The Gift of Imagination”