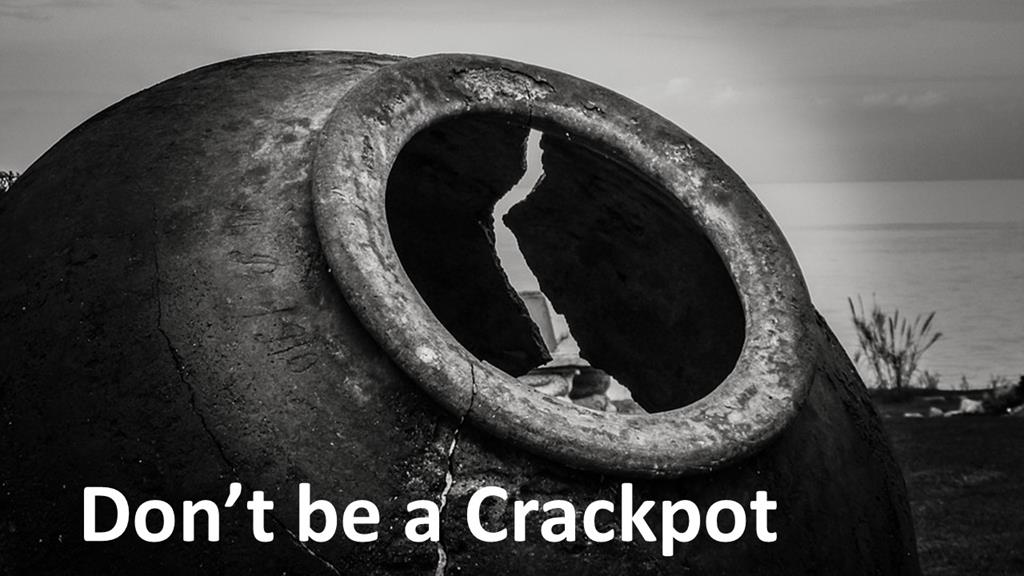 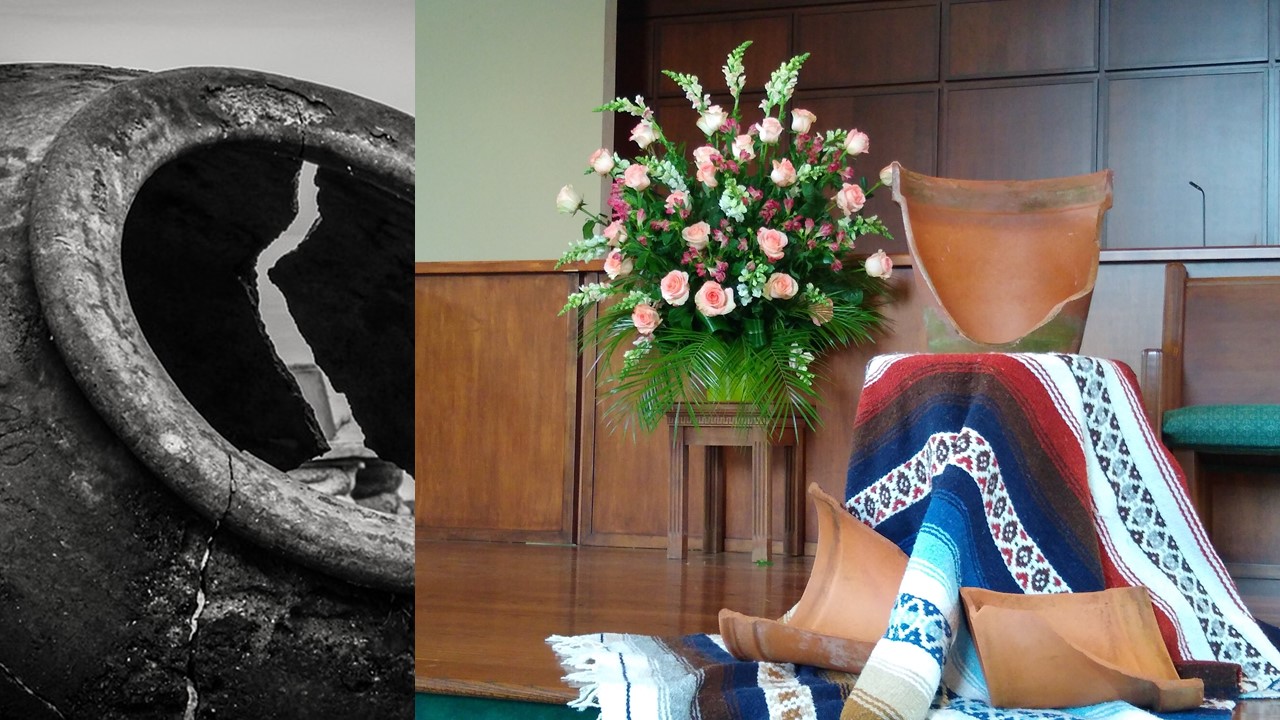 We began our series on Prophesies and Pottery last week, when we saw how Jeremiah was formed by God to be his mouthpiece to Israel. Our image was that of a lump of clay, which has not yet been formed into the vessel. We’re all like that lump and when we allow God to mold us, we can become something beautiful. Throughout the Book of Jeremiah are images of pottery and clay. Some are being formed. Others have already been formed and fired and are now broken and no longer useful. Today’s image is like that, of a broken cistern. There is not much use in a vessel which no longer holds water, just as the cracked pot in our display is useless. Today’s message can be summarized: “Don’t be a crackpot.” 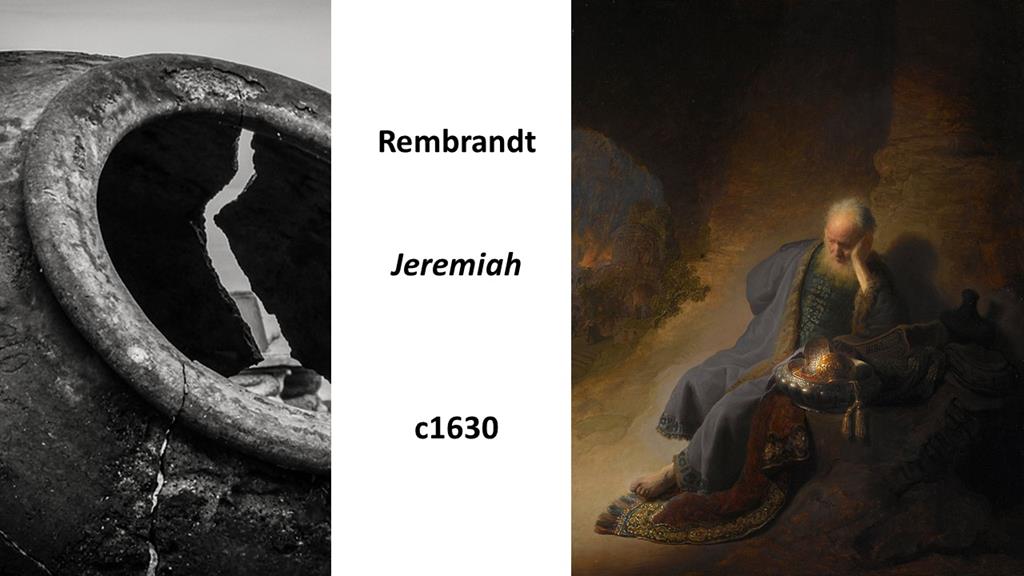 Last week we learned of Jeremiah’s call by God as a prophet to pluck up and to pull down, to destroy and to overthrow, to build and to plant.”[1] As I stated then, Jeremiah was one of the longest serving prophets in Israel’s history, with a career spanning roughly forty years. In chapter two, we see that the prophet gets down to business, as he calls on God’s people to change their ways before it is too late.

This chapter takes the form of a legal indictment, a common genre in the ancient world. There are surviving examples in which a ruler or a king wrote an indictment against a ruler of a vassal state who is not fulfilling the desires of the controlling state. Think about the king of Judah, as a vassal state of Assyria, receiving a letter from the king of Assyria. The letter would contain an indictment. It could be used to nip in the bud any thoughts of revolution, as the superior king reminds his inferior king the benefits of their relationship while also threating punishment if things don’t change.[2] A more recent example might have been a letter sent from the Soviet premier to Hungary in 1956 or Czechoslovakia in 1968, right before troops rolled in. The leaders of Hong Kong have probably also received such a letter. It’s also like a letter of a jilted spouse or lover. God sends this letter to his people through Jeremiah. It’s a warning and a reminder of who’s in charge.

This passage contains some of the earliest words of Jeremiah,[3] perhaps being spoken even before the religious reforms of King Josiah, long before Babylon comes onto the international scene. Last week, I spoke about how Jeremiah was called to be a prophet at an optimistic time in the history of Judah. The armies of Assyria had destroyed the northern kingdom of Israel and for a century had controlled Judah as a vassal state. But Assyria’s power was waning. Without them on the international stage, there was hope of a better future for the Hebrew people. But it didn’t happen. Josiah was killed, his reforms were short-lived, and the people continued to chase after the gods of their neighbors. Jeremiah’s voice brings God’s indictment against the Hebrew people, especially the leaders (both religious and secular) for allowing and encouraging such idolatry. As you can imagine, when things are looking up, people don’t want to hear such rants as came from Jeremiah. But he was called to be faithful, not to scratch their itchy ears. Read Jeremiah 2:1-13 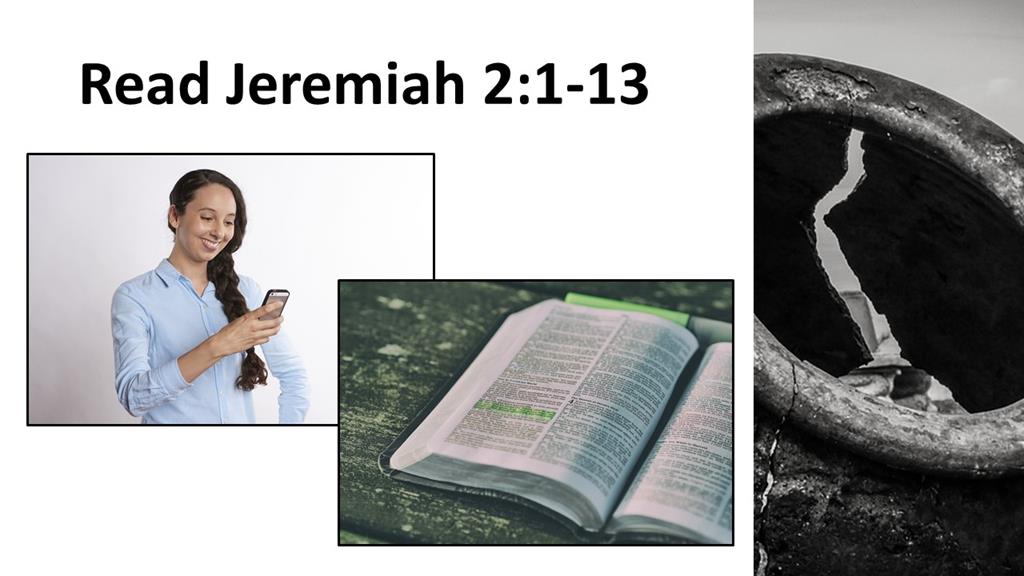 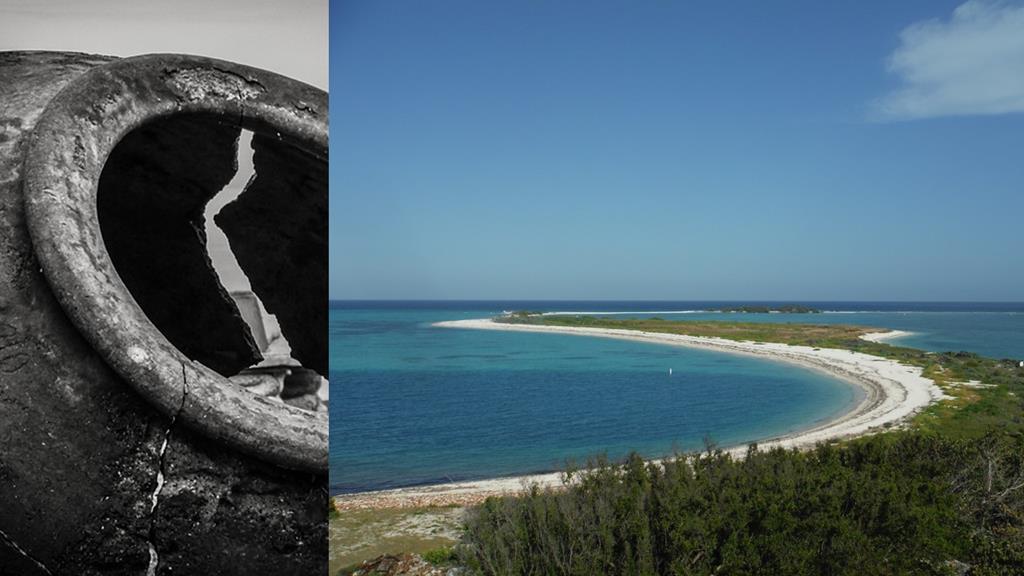 In the spring of 2018, my sister, my father, and I took a trip to the Dry Tortugas. I’m sure many of you read the article I had about the trip in The Skinnie.[4] A popular misconception is that Key West is the last of the keys. It’s not. Sixty-eight  miles west of Key West are the Dry Tortugas, a collection of small coral keys that rise just above sea level. The island was discovered by the Spanish explorer Ponce de Leon, who named it “las Tortugas” or “the turtles.” Without any fresh water to drink, cartographers added the word “dry” as a warning to sailors. Even without water, the islands were strategically important for our country, especially in the days of sailing ships.  The keys provided a harbor for ships during storms and they provided an outpost to intercept any attempts of an invasion of our Gulf Coast. The islands protected the harbors of New Orleans, Mobile and Pensacola. In the early 19th Century, after the War of 1812, when our nation began to seriously deal with national defense, Fort Jefferson, a huge brick fortress, was built on the largest key. Fort Jefferson may be the largest brick structure in the Western Hemisphere. 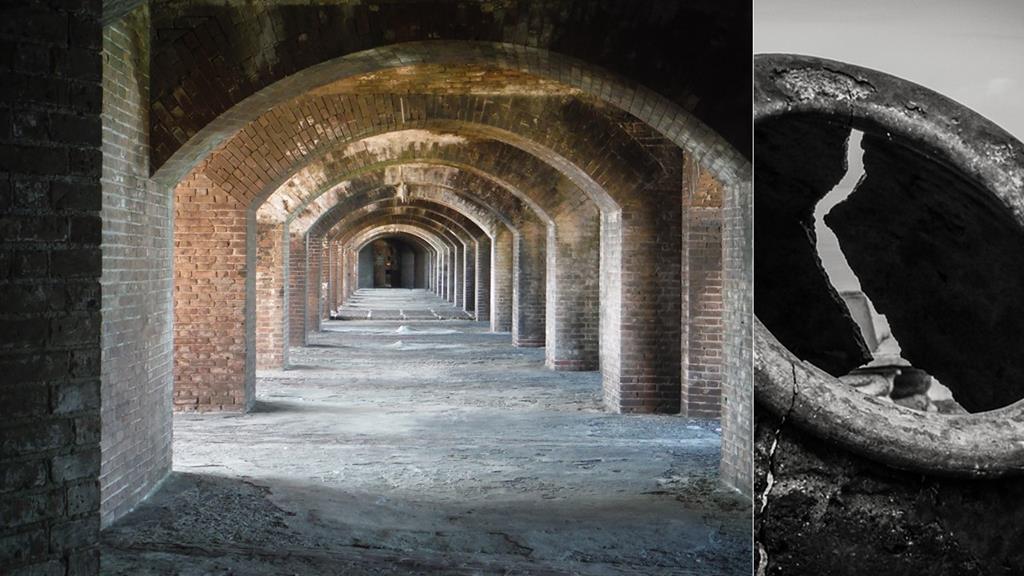 If you’re going to have a fort with a substantial garrison on an island without fresh water, you must find a way to overcome that limitation. The engineers who designed Fort Jefferson came up with a unique way to address the lack of water. They built a series of cisterns under the walls of the fort and designed a system to funnel rainwater into the cisterns where they provided water for later use. The fort could hold nearly two million gallons of water. It was thought there would be enough water and provisions within the walls for the fort to survive a yearlong siege. 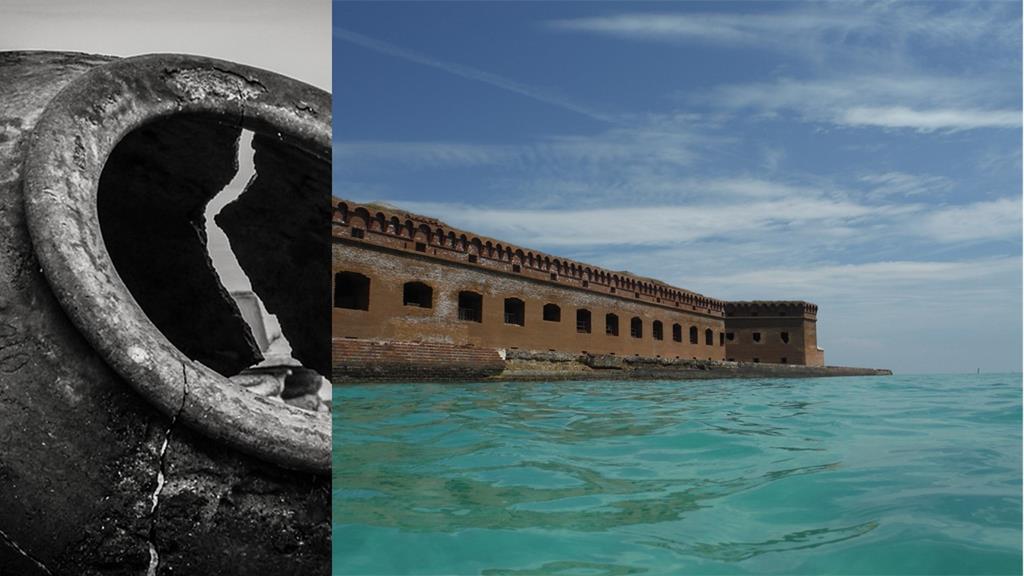 But the plans of men and women often fail. This massive fort, built with millions of bricks and packed dirt, was so heavy that of the 136 cisterns, all but three cracked and allowed saltwater to infiltrate. They became useless.

Through Jeremiah, God says that the Hebrew people are like cracked cisterns. The Hebrew people knew that God was talking about, for they lived in a semi-arid land that only received water part of the year. Farmers would dig out cisterns in the rock, but since the rock was limestone, which is porous, they’d have to seal the rock with a plaster-like substance. But the earth moves and at times such cisterns would crack and began to leak and when the farmer needed water, none would be available.[5] 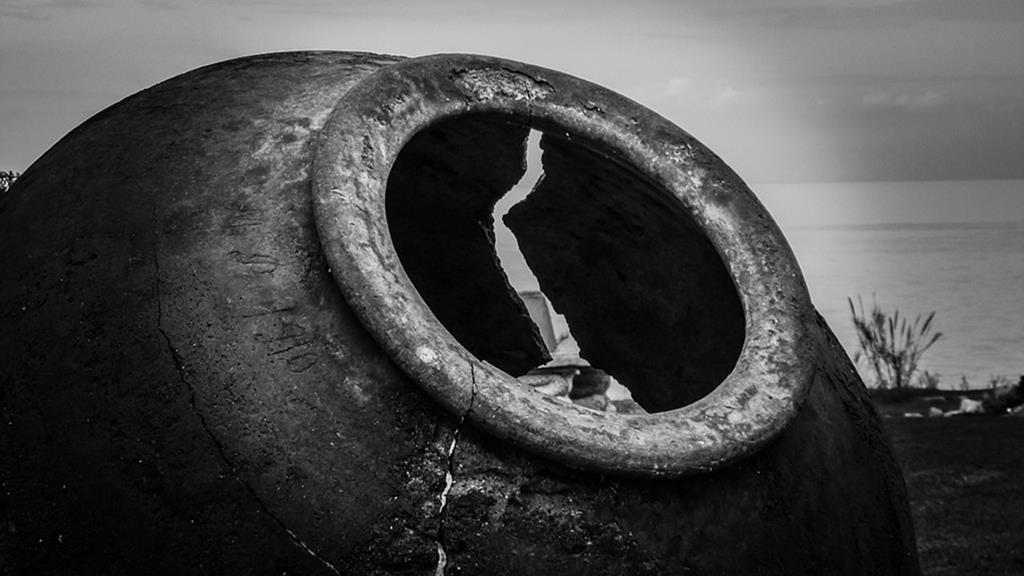 The cracked cistern image shows Israel’s condition after chasing after non-existent gods. As humans, we all need water. An image of God’s providence found throughout Scripture is that of living water nourishing us.[6] God expects us to draw from such living water, but when we turn our backs on God, or try to create our own source of water (be it security or prosperity) while ignoring God, we risk dying of thirst. That huge, powerful fort that couldn’t provide its own drinking water is a good example. It takes more than human strength and might to provide for our needs. It’s also dangerous for us to seek security in anything outside of God, for no other gods (that’s gods with a small g), or human systems of power, will last forever. Sooner or later, we will fail. Only God is eternal. Do we stick with God or with the plans of men and women?

But the people of Israel didn’t want to hear this. Jeremiah the bullfrog, croaking in the corner of society, was a nuisance they tried to ignore. And soon, it would be too late. Jeremiah’s call needs to be heard throughout all ages: “trust in the Lord, not in anything else.” It’s as true today as it was 2500 years ago. 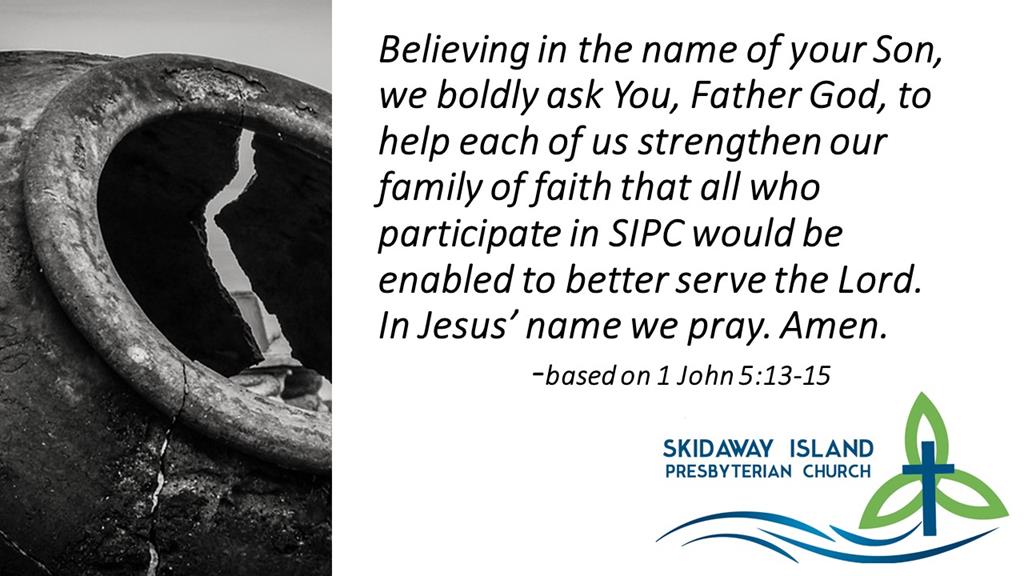 As you know, the Session of your church have been studying the challenges facing us. As a congregation, we are aging. We are struggling to find ways to reach new groups of people, and to invite them to be a part of our fellowship and help us continue to reflect Jesus face to our community and to the world. The Session has spent considerable time and energy examining the congregation and the community. We have looked at our worship services, the message and the music, along with the needs and wants of members and non-members. But about half-way along this road, it finally dawned on some of us that what’s important isn’t what we want, but what God wants. So, we added a prayer component to our attempts to strategically plan. We know that without God, we are useless. We are like cracked pots in which the water runs into the ground. The problem with cracked pots or cisterns is that sooner or later, when drought comes, we’re left dry. So, I encourage you to join with the Session in praying daily for our congregation. Each week, you’ll receive a new prayer. It’s on your flyleaf of the bulletin and you’ll also receive it as an email reminder during the middle of the week. Take this prayer and pray it daily. Whatever we end up doing, we need to be seeking God’s direction. 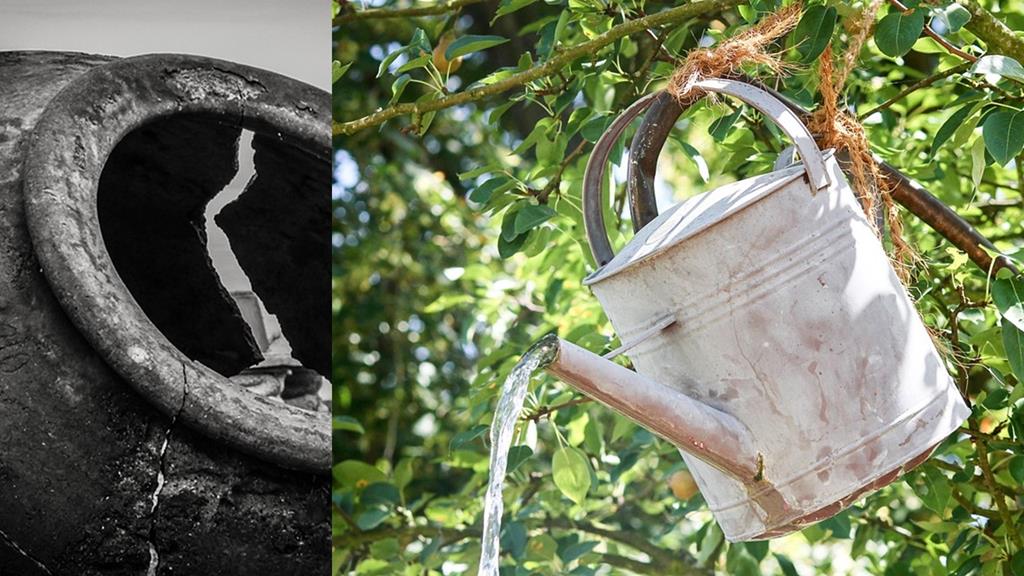 Friends, we don’t want to be cracked pots. We want to be vessels holding abundant living water that will quench our thirst, and can be shared to others, to quench theirs. Amen.

6 Replies to “Don’t be a Crackpot”