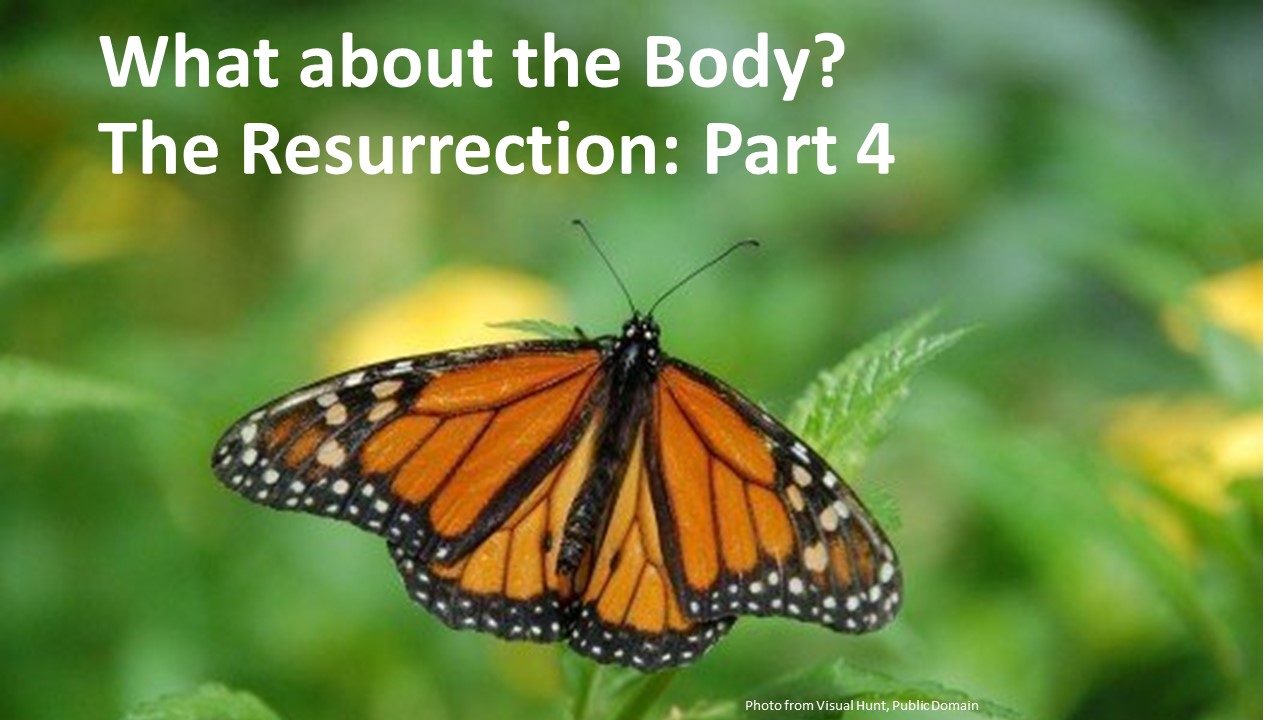 Today, I’m in my fourth of five sermons on the 15th Chapter of Paul’s first letter to the church in Corinth. That may sound like a lot of sermons, but it’s a long chapter!  Two weeks ago, we talked about the ethical consequences of the resurrection. For Paul, the resurrection isn’t just something that only affects us in the future; the resurrection is the reason for us to live for Christ in the present. In this section, Paul returns to his discussion about Christ and Adam as he discusses the “resurrected body.”[1]

It appears Paul’s reason for this discussion is to convince those in Corinth who question the resurrection. They may have formerly been Jewish Sadducees. The Pharisees, if you remember, believed in a resurrection, but the Sadducees taught that this life was it. Paul addresses such disbelief in the first half of his response. Now, as he moves toward his conclusion of the topic, he addresses what he anticipates to be the follow-up question. Having maintained that there is no resurrection, these critics of Paul’s teachings might come back to Paul’s challenge and ask, “Well, Mr. Big Shot, since you say there is a resurrection, how is this going to happen and what are we going to look like?” Let’s hear what Paul has to say.  Read 1 Corinthians 15:35-50.

Have you had an experience where you dreaded what was to come and then found yourself unexpectedly pleased by what happened? 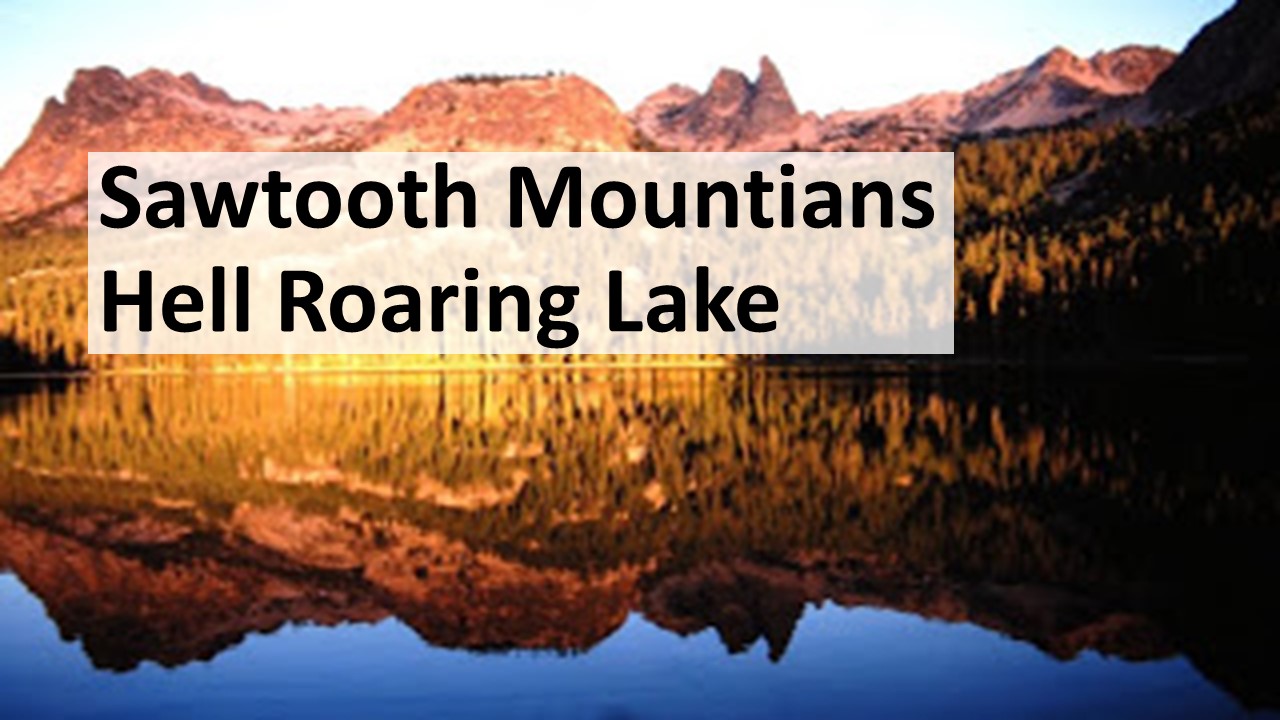 I woke up at 6 AM to the sounds of the Star Spangled Banner blaring from the radio. It was the day after Labor Day, 1988. KECH with its whopping 58 watts of amplification began the day’s broadcast up and down the Wood River Valley. The station was off air between midnight and 6 AM, so instead of setting an alarm clock, I just left the radio on at night. I went to sleep to music and woke feeling patriotic. I had become accustomed to getting up in this manner during the summer at Camp Sawtooth in the Boulder Mountains of Idaho. As the music played I’d wash up, brush my teeth, dress, and head down to the dining hall where I’d build a fire to ward off the morning chill. Throughout the summer, when I came into the dining hall, the cooks would already be in the kitchen, fixing breakfast. The smell of coffee perking and bacon frying would fill the air. It had been a near perfect summer. But this morning was different. 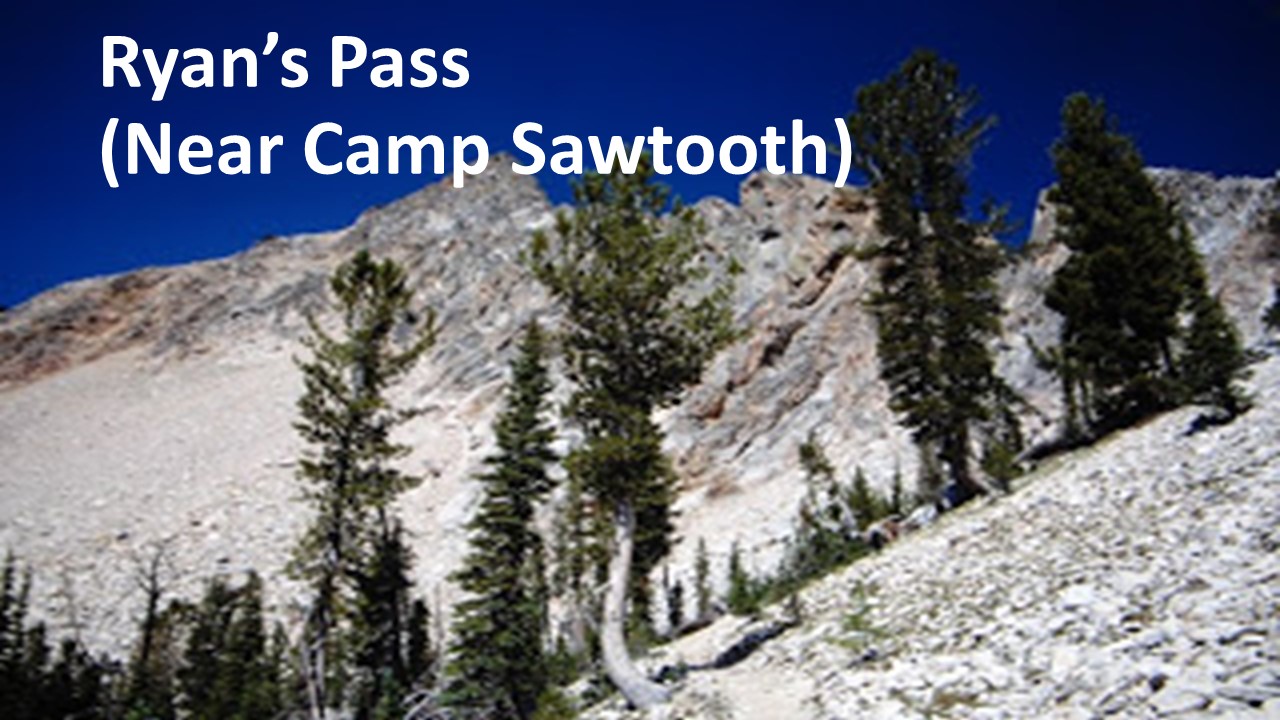 I dreaded getting out of bed. The cooks were gone for the season. I had to fix my own coffee. Yesterday, the last weekend group for the summer had left and camp became eerily silent. If you have ever worked at camp for a summer, you’ll know the feeling I’m expressing. There were only three of us left in that canyon, and we’d all be heading out after lunch. The morning would be busy draining pipes and closing up the camp for winter. When it came time to leave, we’d lock the buildings and gates and our summer in the valley under the tall lodgepole pines between even taller mountains would be over. 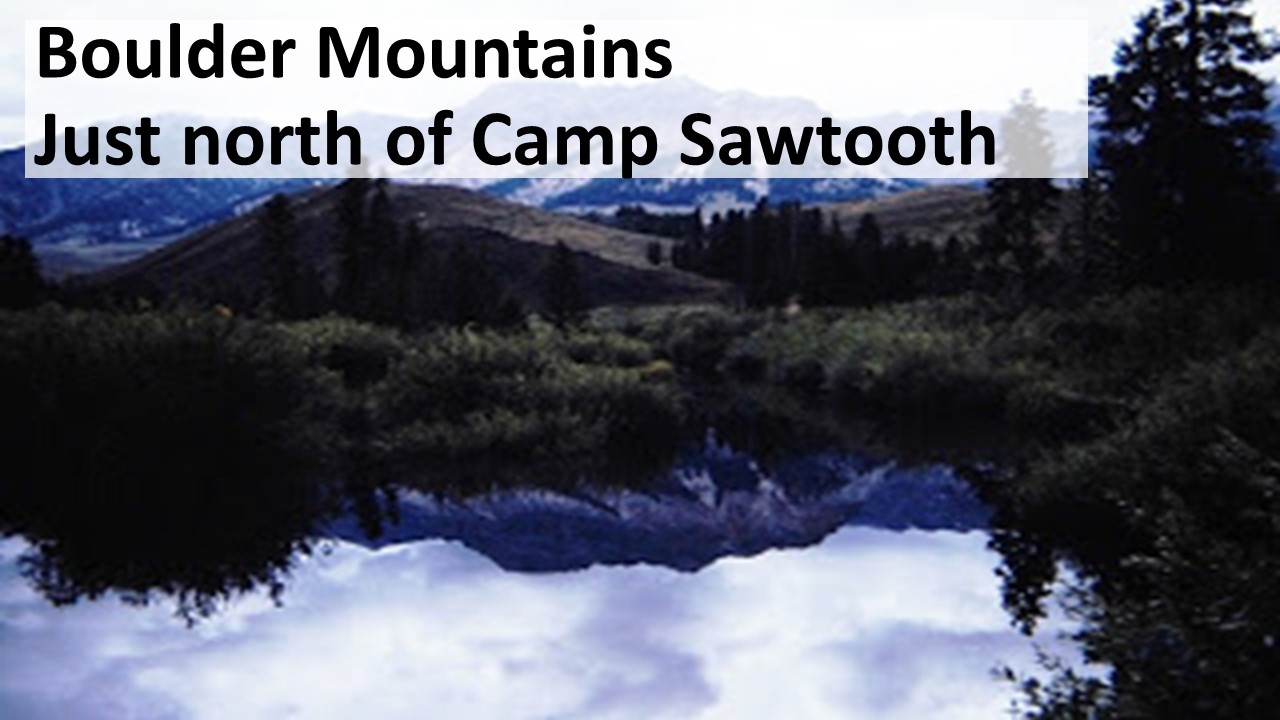 After listening to the news and the weather (it was below freezing in the mountains, but would warm up and be another sunny day in paradise) I reluctantly crawled out of bed. I made coffee for Jack and Evelyn, our caretaker and his wife. I laid a fire in the wood stove one final time.

It wasn’t just leaving camp that I was dreading. I was worried about what was ahead in my life. That spring, I had agreed to spend a year in Virginia City, Nevada. It sounded exciting back in March: to be a student pastor, preaching every Sunday, and living in this desert town. Now the time was at hand, I wasn’t sure I was up for the task. First of all, I had to come up for a sermon every week. And then, I’d be living in Nevada. This was back in the 80s, before casinos dotted the landscape. Having been raised to consider gambling a sin, it made me nervous to be where it was in your face. 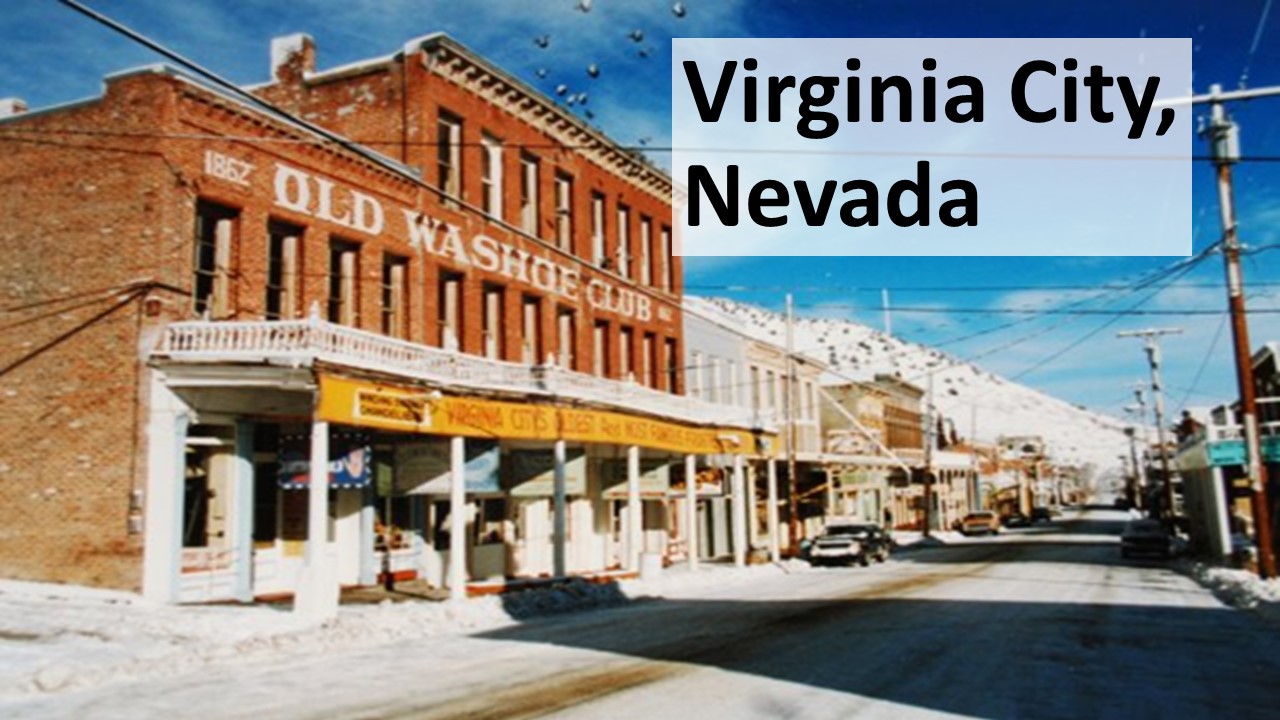 Furthermore, Storey County, in which Virginia City sits, had legalized prostitution, a troublesome idea that made me wonder how I’d relate as a pastor, a public representative of God. Finally, even the drive to Virginia City seemed daunting. Much of it was on two-lane roads through mountainous deserts. The last leg included the infamous forty-mile desert where there isn’t a drop of water to be found. I’d just read a book on this stretch the pioneers dreaded and even though I’d be flying through that part of the trip at freeway speeds, there was something about going through this desert that made me nervous. It didn’t get any better the next morning, when I stopped in Lovelock at the edge of this desert and noticed one of my tires going flat. I took it to a shop and sure enough there was a nail in the rubber. It was good I found it when I did; however, it seemed a bad omen. Have you ever been there where you just dreaded what’s next?

Of course, with the exception of that nail, the trip was uneventful. I arrived in Virginia City and after a week or so of feeling out-of-place, it became home. As much as I had enjoyed the summer, I really enjoyed that year in Nevada, as most of you have probably surmised from stories I’ve told. The dread turned into a blessing. Have you had such an experiences?

We have a God who loves to surprise us. Ours is a God who invites those at the back of the line to come to the front.  He’s a God of love who’s willing to forgive and to allow us a chance to start afresh. He’s a God of protection and refuses to abandon us. He’s a God of glory who shares his majesty through the beauty of a sunrise or a rainbow after a thunderstorm. God can take what we dread and provide a memorable experience. And the resurrection is the ultimate example.

We all dread death, don’t we, but our hope is in the resurrection, which can only be experienced after death. In the resurrection, God reverses our fortune and we’re changed from dead to eternal. Just don’t ask me how. It’s just God’s way. But before I go to what Paul has to say, I should note that such dread of change can be an issue in all areas of our lives. We even find ourselves having such feelings in the church. As people, it seems we like to resist change even though it’s the only thing certain in life… Yet, we’re always nervous about the future. This shows our lack of trust in others (which can be expected, for we’ve all been let down at one time or another). But it also displays a lack of trust in God. We seem to forget that God has things under control; it’s not really up to us.

You know, we’re involved in a Strategic Planning process and this passage speaks to the fear we have of such a process. None of us like change? But to loosely summarize what Paul says here: “sometimes things have to die so that something new and better can come into being…”

As I said before reading this passage, Paul begins asking what probably had been a follow-up question by those who were denying the resurrection. “Just how are the dead raised, Paul?  What kind of body will they have?” Paul doesn’t mince his words here and replies with a passionate response, “Fool.” You can’t be much more emphatic than that! He continues by noting what is planted as a seed has to “in essence” die (as it’s buried in the earth) in order to come to life as a new plant. He also notes there are different kinds of flesh and different kinds of bodies as he points to other animals and even to the heavens… We live in a wonderfully unique world.

Of course, this world to come, this resurrected body we’re to inherit, is still a mystery. But it will be amazing, according to Paul. Our bodies are perishable, but after the resurrection, they’ll be imperishable. Due to sin, our bodies have been dishonored, but the resurrected body will be glorious. Our bodies today grow weak, but in the life to come our bodies will be strong. The resurrection will result in a new spiritual body—which by the way doesn’t mean we’ll be ghost-like, for Paul insists that we’ll have bodies.

Next, Paul returns to the topic he’d brought up earlier in the chapter: Adam and Jesus. Adam is the man of dust. God created him as God created us. If there was any question about Christians believing in reincarnation, Paul negates such ideas here when he insists there is no spiritual beginning for us. This idea was no doubt prevalent in Corinth as it is found in Platonic thought. At the end of Plato’s classic work, The Republic, he describes how spirits leave one world to be born in this world.[2] But this isn’t a Christian idea. Many New Agers as well as Mormons, Hindus and Buddhists believe either in some form of pre-existent spiritual presence or reincarnation, but such thoughts are not a part of our theology. As Paul shows, we are from the dust.

But there is one who transcends the dust, the one who in Revelation is known as “the alpha and the omega, the first and the last, who is and who was and who is to come.”[3] Although this man was from heaven, he set aside his glory and power and assumed a life in the flesh.[4] With Adam, the man of dust, we share his sinful imprint.  However, with Jesus, the man of heaven, we too will share his imprint, and it will be glorious.  But that’s in the life to come and we’re all going to dread what it takes to get there, for our perishable bodies must return to the elements before we can arise with glorious new and eternal bodies.

Does Paul tell us what heaven is going to be like? No, not really, except that we will have bodies. Instead, he places his trust in a loving God that has our best interest at heart. And he encourages us to do the same. Yes, there is a resurrection and whatever lies on the other side of death is going to be far more glorious than we can ever imagine in this life.

As followers of Jesus, we shouldn’t spend too much time fretting and worrying about the future. “Don’t worry about tomorrow,” Jesus tells us.[5] God’s got it under control. Yes, life is going to be full of changes, but such changes won’t even begin to compare to the transformation we’ll experience at the end. Living with the confidence of the resurrection should mean that we fear changes less in this life, for the long-term forecast is for things to be incredible. Amen.

[1] Compare this to 1 Corinthians 15:21-24.  I am basing my thoughts upon ideas set forth by Kenneth E. Bailey in Paul Through Mediterranean Eyes: Cultural Studies in 1 Corinthians (Dowers Grove, IL: IVP, 2011).

2 Replies to “The Resurrection, Part 4”