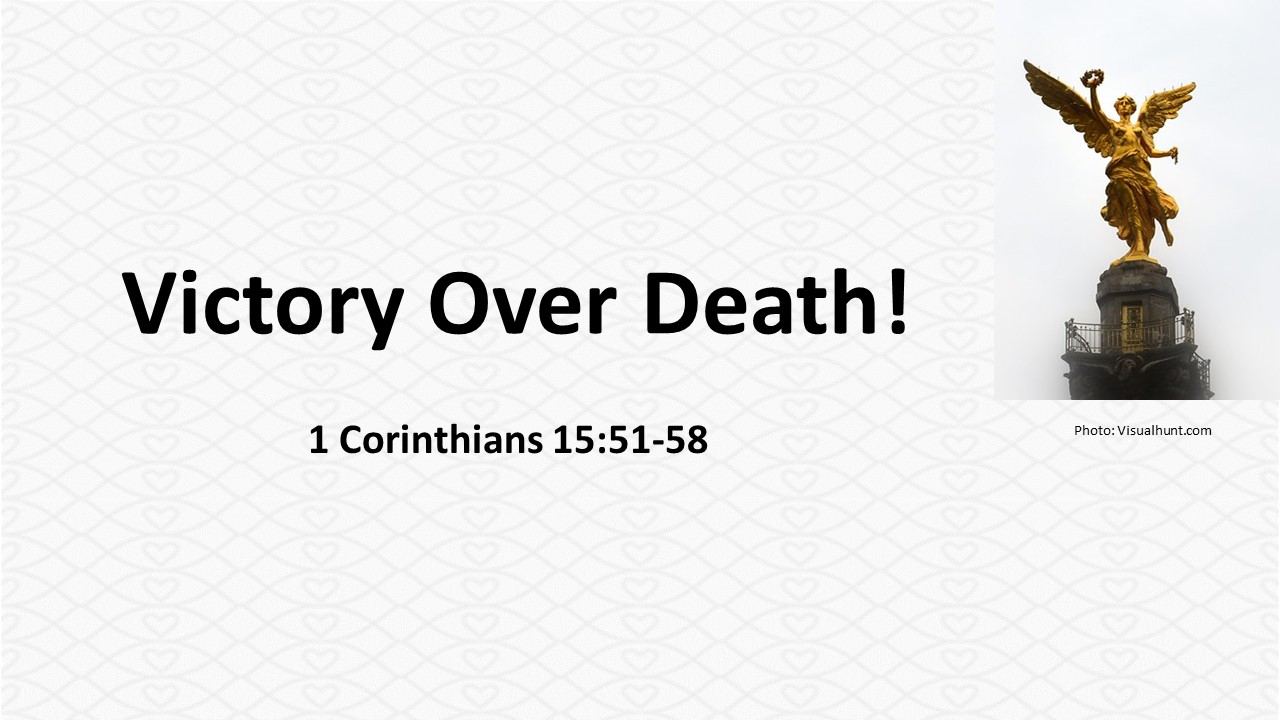 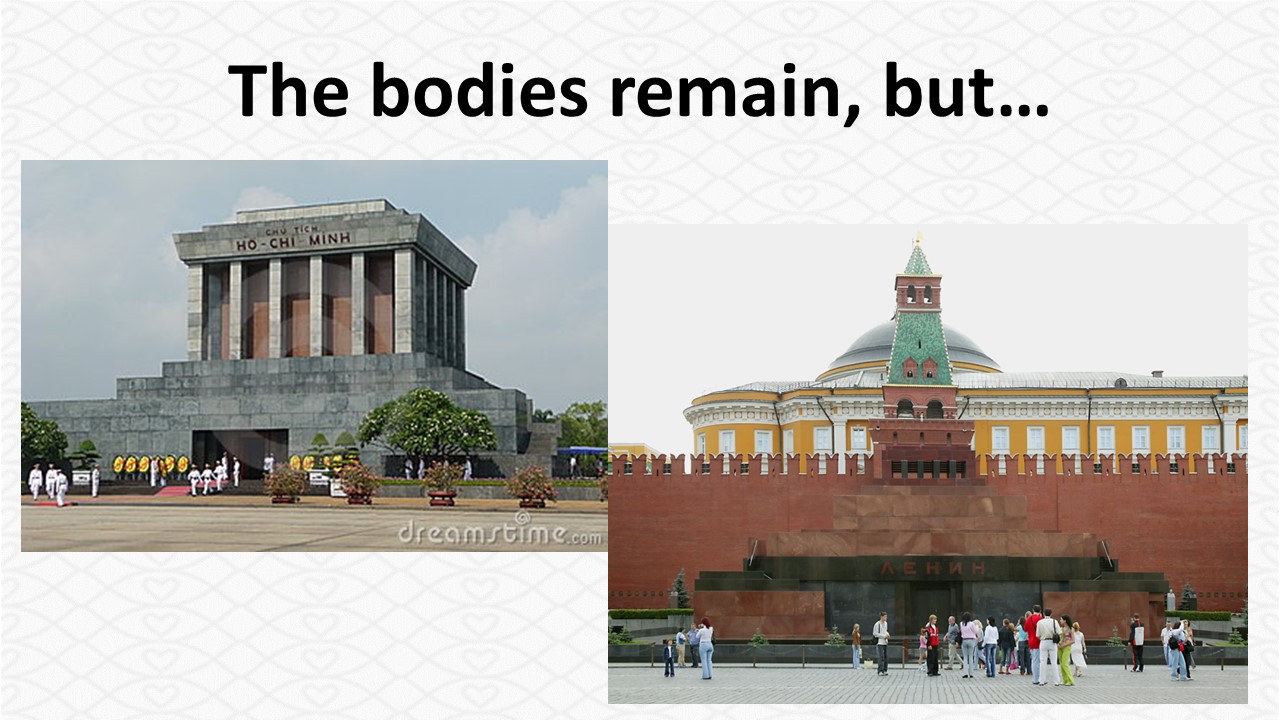 I’ve seen the bodies of Ho Chi Minh in Hanoi and Lenin (not John) in Moscow. Walking pass their preserved flesh, I got chill bumps. It was frigid in the mausoleums. I felt a bit sad for Ho. He wrote specific instructions that his body was to be cremated and the ashes scattered all over Vietnam. But when you’re gone, what happens to your body is no longer in your hands. But there was something else I experienced at these mausoleums. Regardless of what you think of these men who were no saints, they are dead. Sooner or later, we’ll all cease to exist. Our current bodies will become useless and eventually revert back to the dust. But that’s not the final word.

Today I’m concluding a series on the resurrection that began on Easter Sunday.  Paul, in this passage, celebrates what’s to be.  Listen as I read 1 Corinthians 15:51-58. 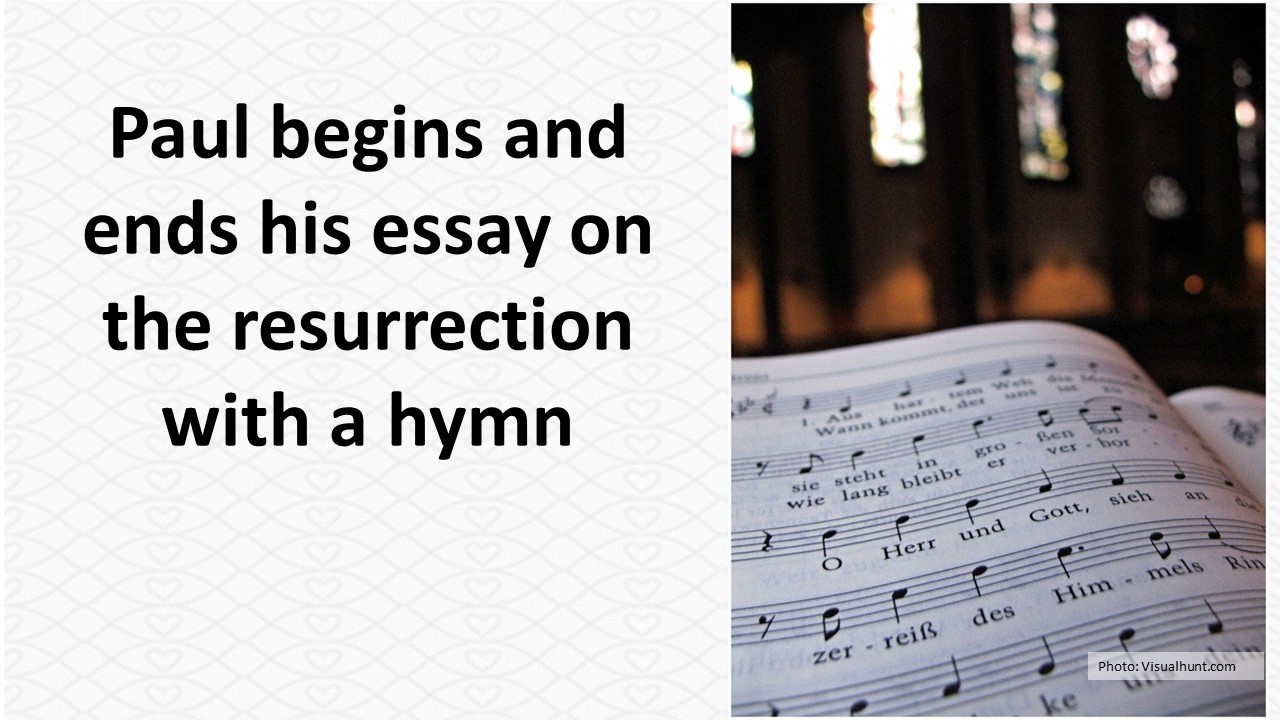 Paul ends his resurrection essay on a high-note. He began this essay which takes up the entire 15th chapter with a hymn. Now, he concludes the essay with another hymn celebrating victory over death.[1] We can’t help but to be lifted up with this passage of hope. It’s often read at funerals. “Death has been swallowed up in victory. Where, O death is your victory?  Where, O death is your sting.” Victory comes not through our actions, but through our Lord Jesus Christ. Because of him we have hope. 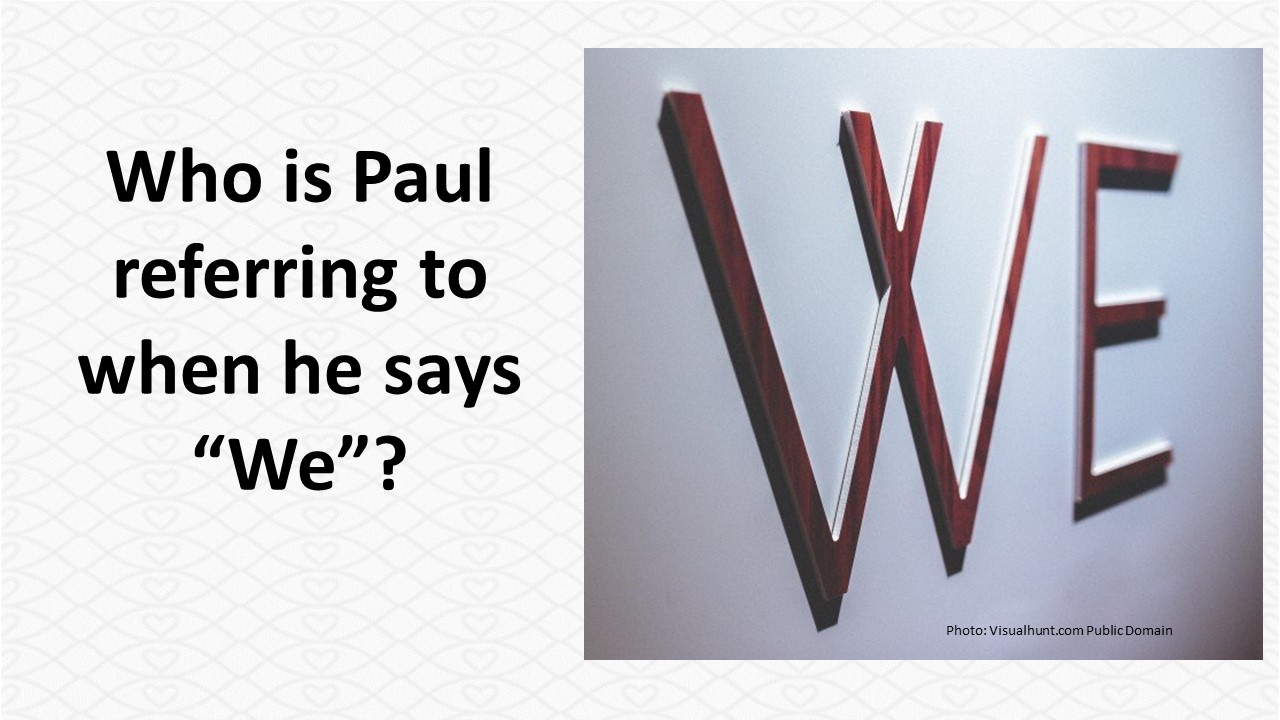 There are a couple of issues raised in this text that I want us to explore this morning. Paul begins almost as if confiding a secret to a friend, “Listen,” he draws the Corinthians in, “let me tell you a mystery.” Paul is writing about something he admits he doesn’t understand; it’s a mystery, but in this mystery resides hope. “We will not all die, but we will all be changed.” Now, there is a question here about what Paul means when he says we will not all die. Who are the “WE?” Some argue that Paul believes Jesus’ return is going to be soon, during their lives. We see a similar thread in Paul’s first letter to the Thessalonians where he comforts those who are concerned about their friends and family members who have died and what will happen to them after Christ returns.[2] If Paul thinks he and some of the Corinthians are going to be alive at Christ’s return, then he changed his mind by the time Paul wrote 2nd Corinthians.[3] However, a more logical interpretation is that Paul looks forward into history and realizes that not all believers are going to have died when Christ returns. The faith is going to still be alive and there will be believers here to welcome Christ when that trumpet of all trumpets sounds.[4] 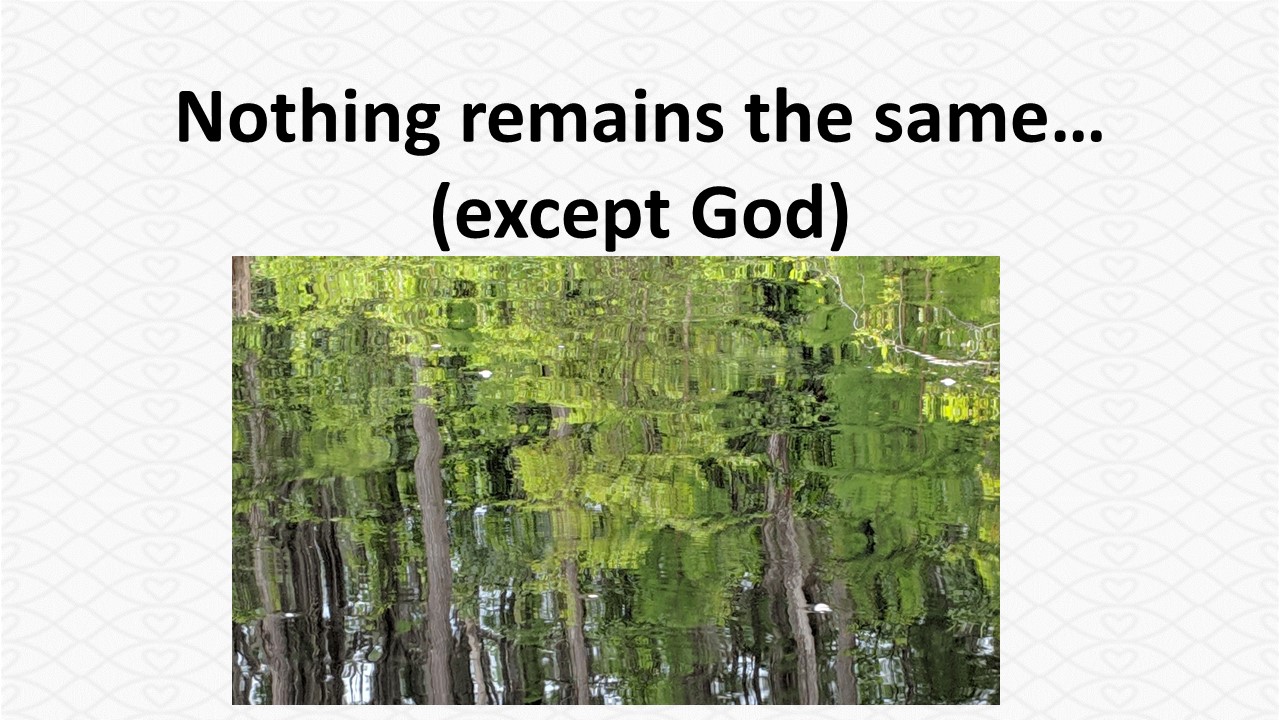 In this passage, Paul emphasizes the necessity of change.  Nothing can stay the same. We have to give up the familiar, our mortal bodies, in order to be resurrected in a new immortal body. Interestingly, Paul insists we will be clothed with immortality which was not taught in the schools of the day. The Greeks assumed immortality was our natural state and it was covered with our bodies; therefore the ideal was the soul, not the flesh covering it. But Paul challenges this notion, for our bodies are, in and of themselves, good.[5] We are, after all, created by God. But, with the resurrection, we obtain the imperishable, that which we cannot obtain in this life and in these bodies.

The putting on of the imperishable clothing, the donning of immortality, may have created in his hearer’s mind an image of the investiture of a king or emperor. When crowned, they put on new robes. They are the same in that they have the same body, but the new clothing makes them also a new person.[6] 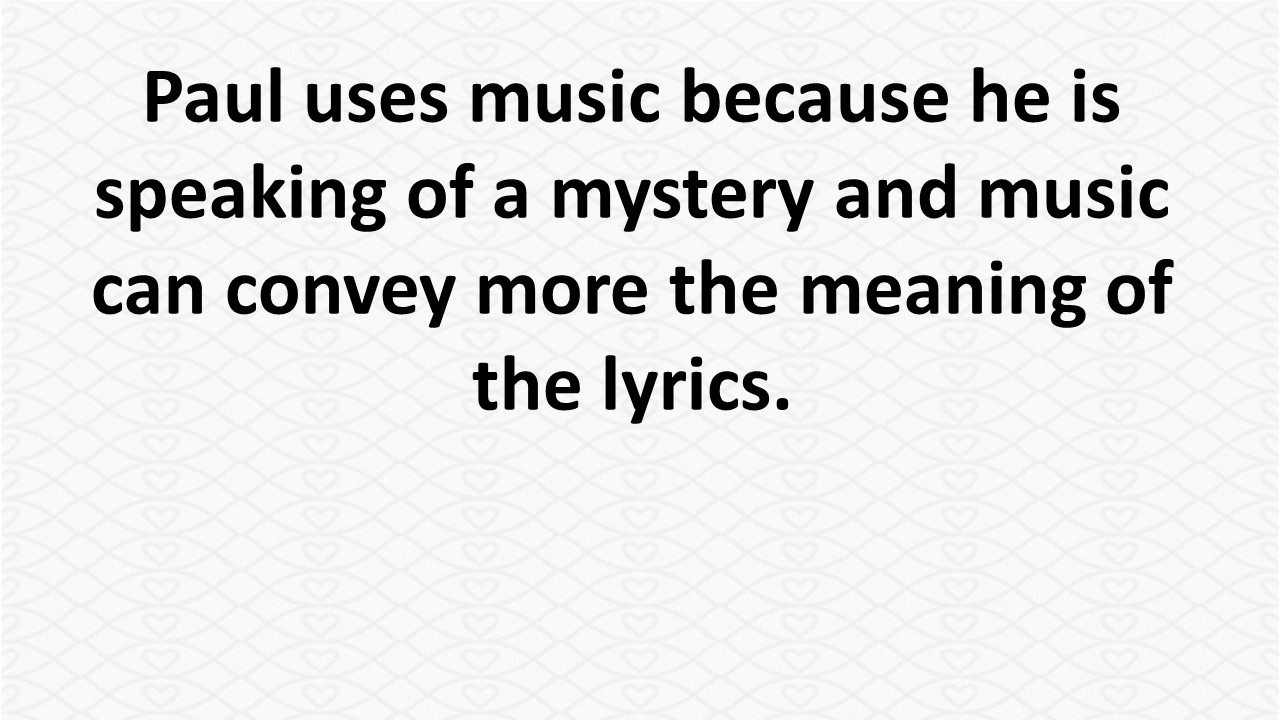 As I noted earlier, it’s interesting how Paul book-ends his essay on the resurrection with fragments of what was most likely an ancient hymn. Paul uses lyrics which were probably sung by congregations in order to connect with something familiar to his readers. Paul’s speaking of a mystery and music has a way to say more to us than just the lyrics, so it is appropriate that Paul incorporates such a hymn as he concludes his treatment of the resurrection.[7] 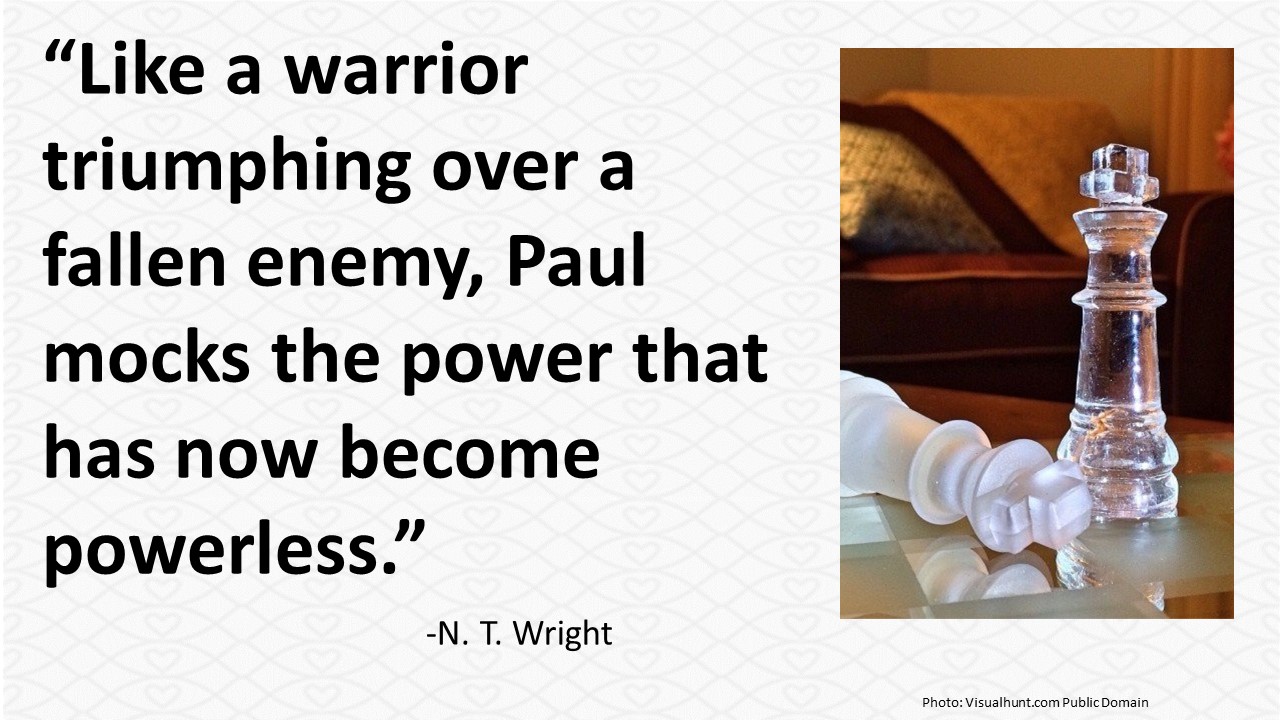 As Paul comes to the end of our passage for today, he makes a powerful statement. In the last two verses, he uses the term “Lord” four times. The modern British theologian, N. T. Wright, suggests that “like a warrior triumphing over a fallen enemy, Paul mocks the power that has now become powerless.”  The victory is in our Lord Jesus Christ! He is a Lord in a manner that Caesar can never be![8] Paul lifts up Jesus’ victory as a way to call everyone in Corinth back to what is important. 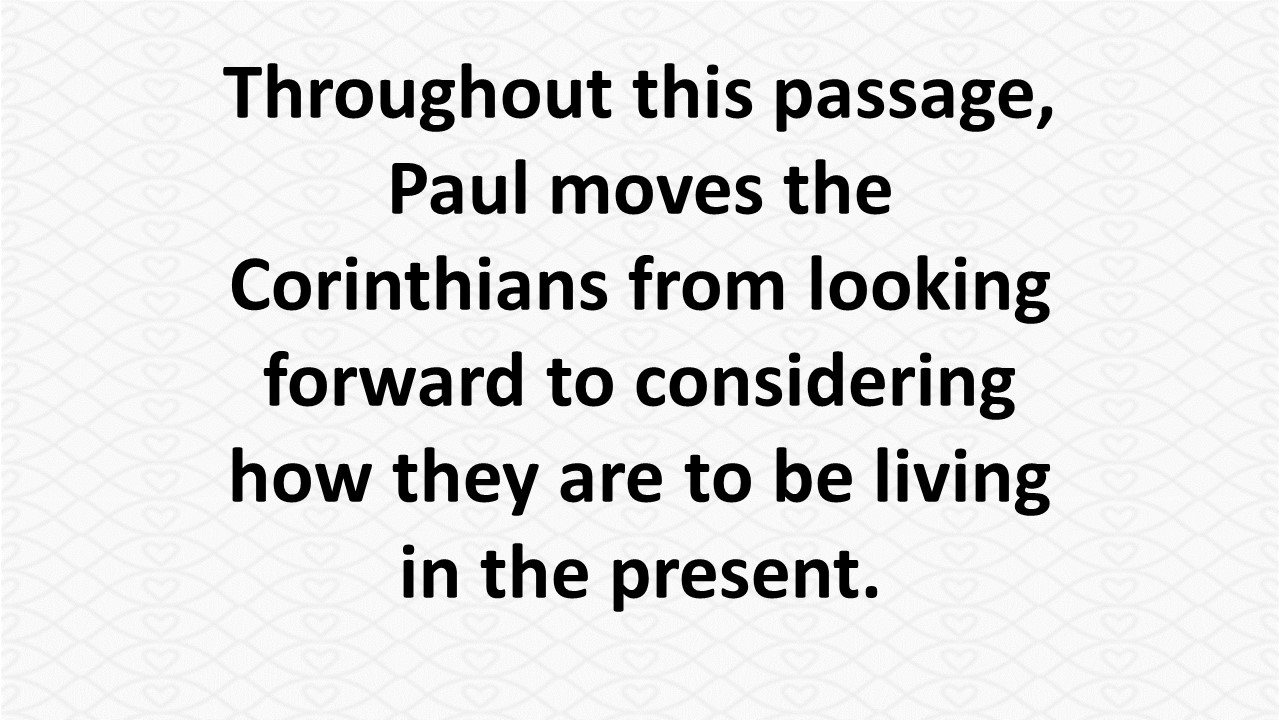 Paul brings this essay to a conclusion with a final statement in which he calls the Corinthians, “my beloved.” It’s like saying, “My dear friends.” As he’d shown at the beginning of the letter, Paul is fond of the Corinthians even though throughout the letter, he’s been admonishing them for their disunity, their toleration of grievous sin, their lack of order within worship and their mockery of the Lord’s Supper. Yet, Paul still likes these people. He’s not ready to write them off, as we might be. There’s a lesson for us here! Don’t consider anyone beyond redemption! This passage which Paul has been looking into the future ends by bringing the Corinthians back to the present and to what they need to be doing.[9] It’s not too late to get things right. 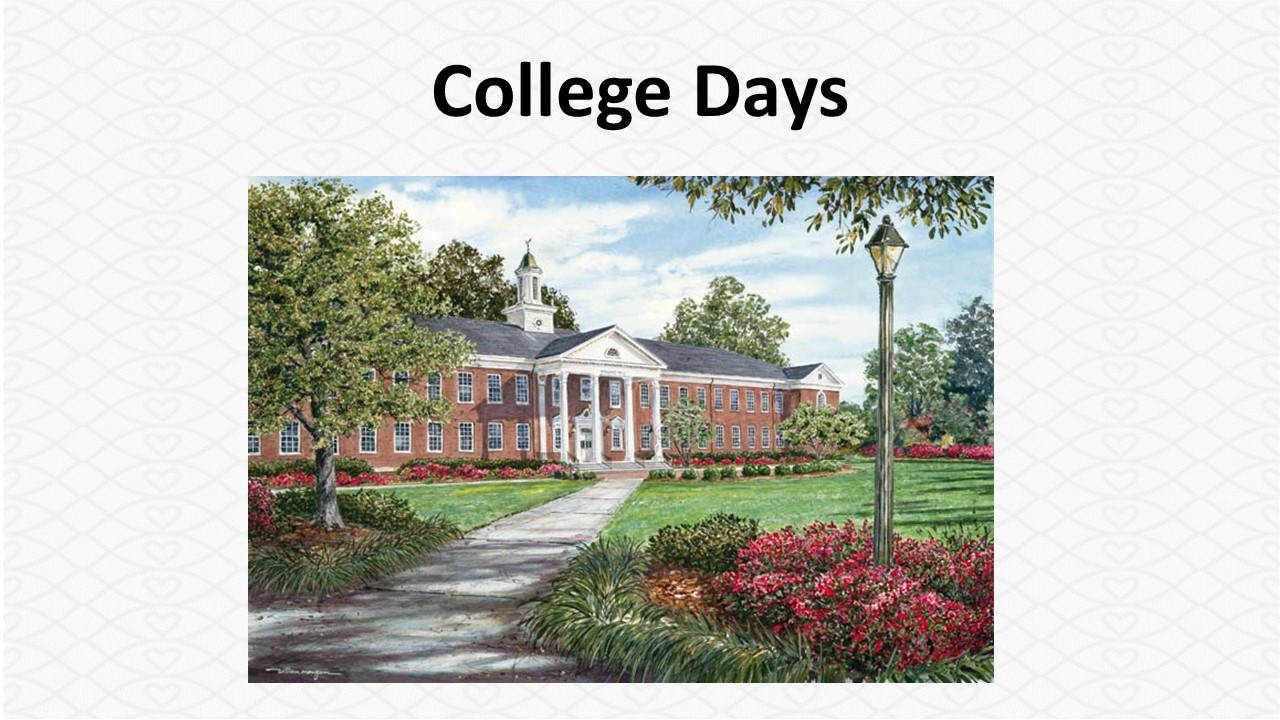 When I was in college I lived in a garage apartment about a mile off campus. It was a nice place, on a side street with just a few homes and this one garage with an apartment above it.  There was a porch, with stairs that ran down to the ground. The porch was large enough for a chair and a couple of potted plants. On Saturday mornings when the weather was decent and I wasn’t off paddling a river somewhere, I could be found sitting in a chair, my feet propped up on the railing, reading or just pondering while I had my morning coffee. It was the good life. I enjoyed birds flying by and singing in the trees. It was a dead-end street, so traffic didn’t bother me. It was also a safe neighborhood as the Chief of Police lived at the end of the road.

One Saturday, I had visitors. The Jehovah Witnesses were going two-by-two, door-to-door, one group on each side of the street. The two who came up the steps to my porch were an older white man, probably about the age of my granddaddy, with a younger African-American woman who wasn’t much older than I was at the time. I was intrigued. This was in the late 70s, and this was the South and I remember thinking this sight wasn’t anything I’d see in a Presbyterian Church (not that we’d be seen going door-to-door). Furthermore, I was pretty sure I’d not see such a sight in a Methodist or Baptist or any of the other churches within the city. There was something refreshing about the two of them and I recalled the song I’d learned in Sunday School: “Jesus loves the little children, all the children of the world, red and yellow, black and white, they are precious in sight…” Judging from how Paul had scolded the Corinthians for their divisions, such a sight would have brought a smile to his face.

We talked for a bit about everything wrong in the world, and at the time there was plenty wrong, as there is now. When I asked what they thought we should do about the sufferings in the world, the man smiled. “We don’t need to do anything as this means Jesus is coming back soon and he’ll take care of everything.” It sounded like a cop-out to me. We debated. When they finally left, we were at an impasse. Neither of us changed our minds.

Had I, as a twenty year old, spent much time with this letter from Paul, I might have brought up this passage. Even though the future is out of our hands, it doesn’t absolve us of the responsibility to try to make a difference in the world, of trying to make things better. That’s what I think Paul means at the end of the chapter where, drawing upon all he’s written here about the resurrection, he concludes by reminding everyone, to “be steadfast, immovable, always excelling in the work of the Lord, because you know that in the Lord your labor is not in vain.”

Paul wasn’t always successful in his work. As far as we know, he didn’t establish a church everywhere he travelled, though he tried. Many if not most of the congregations he created were small. This doesn’t sound like what we might define as “excelling,” which may be why the Message paraphrase translates it this way, “Don’t hold back.  Throw yourselves into the work of the Master, confident that nothing you do for him is a waste of time or effort.” 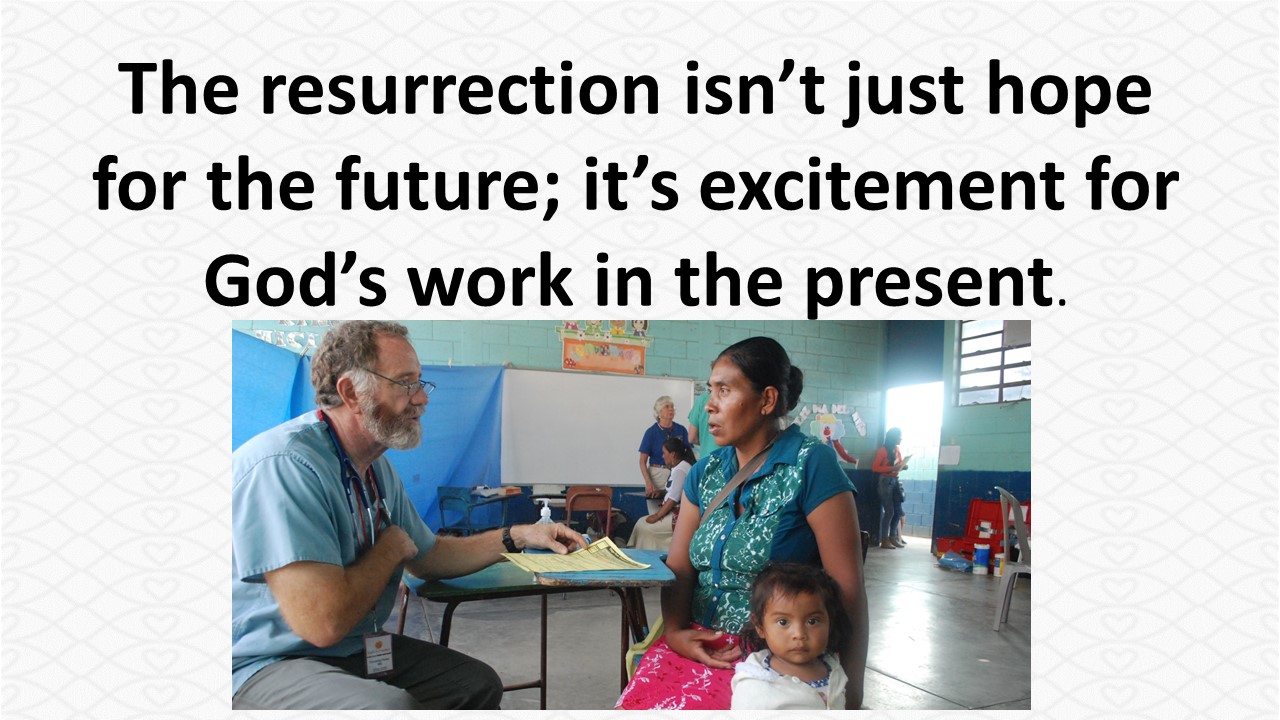 For Paul, as I hope you have understood in these five sermons, the resurrection isn’t just a doctrine that gives us hope for the future; the resurrection provides us the excitement for God’s work in the present. As disciples of Jesus, we have something to look forward to. Our last breath in these bodies isn’t the end. We shall all be changed and that should give us confidence and make us unafraid of taking risks and doing what is good and noble today.  Amen.

3 Replies to “The Resurrection: A Hymn of Victory”