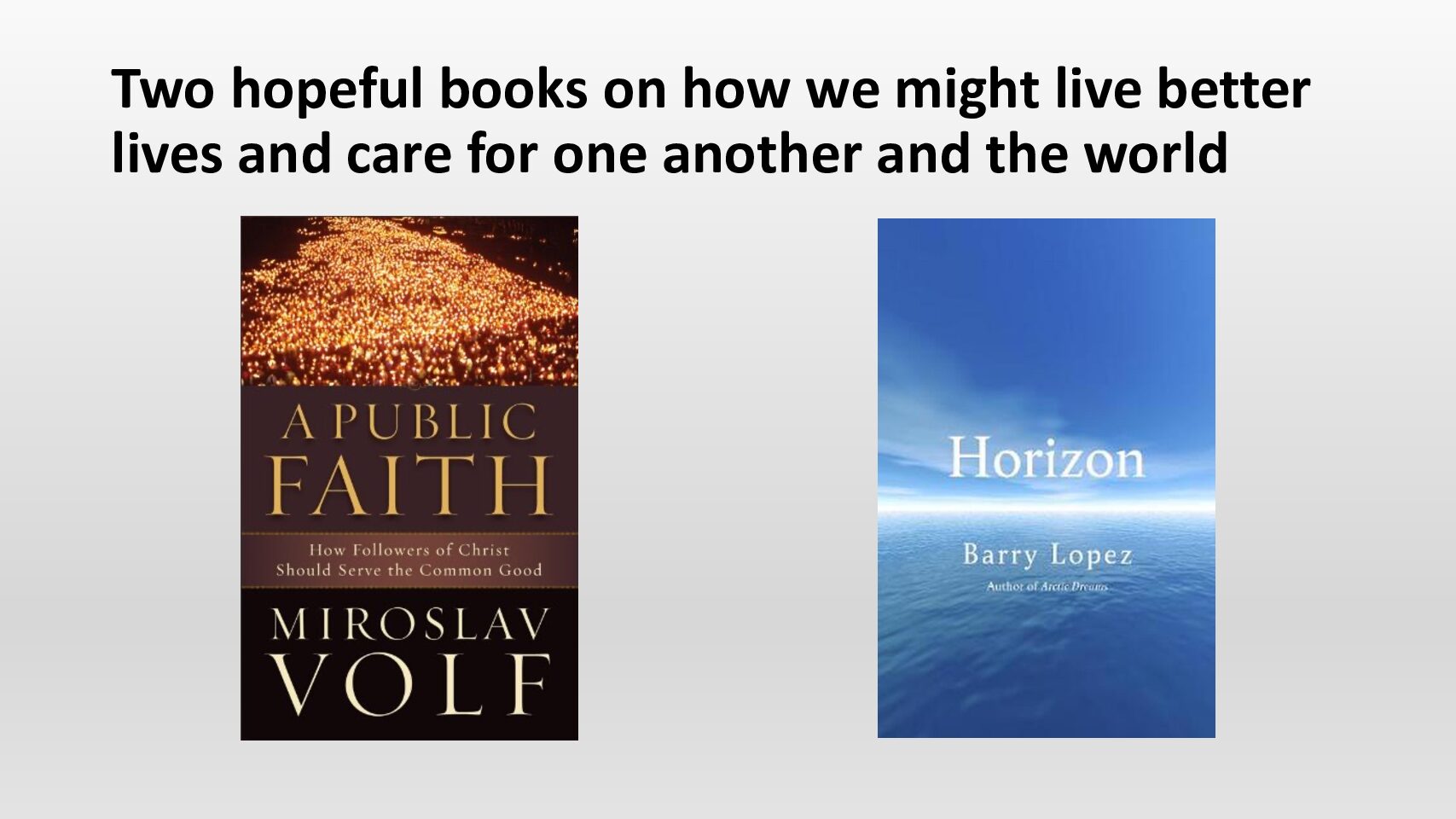 These are two other books which I read while down with COVID. While they may seem totally different, I did find some common ground between these two deep thinkers. Both are interested in how we can help others achieve their potential and sustain society.

In six extended essays, the late Lopez takes us along on his travels to isolated spots around the globe. As his fellow travelers, we are privy to his thoughts. Not only does he beautifully describe this location and what’s happening there, but each setting also allows him to converse with authors, artists, explorers, natives, and scientists. While each essay stands independently, there are several people from the past who appear in more than one of the essays. These include the British explorer, “James Cook,” the British scientist Charles Darwin, and a little known half-native Canadian, Randall McDonald (who taught English to the Japanese court years before Commander Perry opened the Japanese mainland to western shipping).

The book opens with a 47-page introduction titled, “Looking for a Ship” in which Lopez provides some background into his life and explorations. Much of this material was also covered in more detail his memoir,About This Life. However, the introduction does provide the reader with a context to understand Lopez’s journeys that take him to the polar caps and places in between. Lopez’s first essay centers around Cape Foulweather in Oregon, where Lopez lived when not traveling. Cape Foulweather is also the site of James Cooks first sighting of land along America’s West Coast in 1778. He tells about his many visits to this point, as he reads James Cooks travels and strives to understand how the landscape has changed over the years.  His next stop is Skraeling Island in the arctic waters of northern Canada. Then he moves on to Puerto Ayora in the Galapagos, and then to the site of an archeological dig in Kenya (titled Jackal Camp). Next, he goes to an old British prison in Tasmania, before concluding his journey in the Antarctic.  Some of these sites, Lopez visits for only a season. Others, he has returned many times.

Except for the Antarctic essay, which is the only place on earth without any human ancestry, Lopez seeks out to understand the lives of those who lived before the region was “discovered.” This includes Native Americans in Oregon, Paleoeskimos in the Arctic, South Sea islanders in the Galapagos, early humans in Africa, and Aboriginals in Australia.  With his extensive knowledge in botany and biology, he discusses the changes to the landscape from human migration. As an example, I knew red foxes were not native to North America but learned the British also imported them to Australia for hunting.

These extended essays provide Lopez time to reflect on the colonial world, the role class plays in a society (which he even found in the scientific communities in the Antarctic), how animals and landscape evolve, and the concerns of the speed of such evolution in recent centuries. Lopez also looks to the future and ponders creating new ways of bringing more people to the table to discuss and help the world from the crisis that we are experiencing from industrialization. Lopez often comes back to the role elders play in traditional communities and suggests that we need to listen to them.

This is a book to be savored. Lopez encourages us to look around and to understand our place in the world.

QUOTE ON WHAT IT MEANS TO BE HUMAN: “to live in fear in a whole in which one’s destiny is never entirely of one’s own choosing.” (page 508).

There are many who blame religion for many of the world’s problems. Monotheistic religions seem especially vulnerable to such changes. While Volf is writing to Christians, he does make many references to Islam. Of course, all religions have examples of failing to live up to their potential (Volf labels this “malfunctions of faith”), Volf believes religion and especially the Christian faith has the potential to contribute much to the common good. Furthermore, as Volf notes, much of the terrible violence of the 20thCentury, the most violent century in human history, wasn’t because of religion. Genocide was most often conducted by secular regimes.

Volf begins his study by looking at how and why religious groups have failed to contribute to the common good.  For Christians, this “malfunction of faith” is mostly due to our failure to “love God and love our neighbor.” The Christian faith, for Volf, is certainly not waiting for “pie in the sky.” Instead, our faith should be a source of human flourishing, and not just flourishing for believers, but all people.  Religion is about the good life and requires religious people to engage in their communities for the good of all. However, he criticizes the extremes. The followers of Jesus should neither withdraw from society nor should they try to dominate society. Instead, with creativity, they should seek to engage positively in a religiously pluralistic world.

One of the problems in the West is that we tend to understand the good life as “experimental satisfaction,” which can never sustain our deepest desires. The source of the good life is not found within us, but outside, from God and from others. Only by living up to Jesus’ great commandment, can we experience such goodness.

Volf does not envision a world in which there is only one faith. In fact, as I pointed out above, he’s critical of such ideas. We will never be able to bring God’s kingdom to earth. Only God can do that.  For us to attempt to bring about heaven to earth by silencing other beliefs will only lead to further malfunctions of our faith. Instead, he envisions a pluralistic world where those of all faith need to be in conversation with one another and learn from others. While Christians believe in the truth in Jesus Christ, that doesn’t mean there are not things we can learn from others. While he doesn’t use the term, the Calvinist view of “common grace” (as opposed to saving grace) seems to apply here. All good comes from God, including that which is good in those who may have a different view of faith from us.

Volf is a professor at Yale Divinity School and the director Center for Faith and Culture. There is a lot packed into this thin book on how we our faith can help a troubled world.

For those interested, Volf will be the keynote speaker at this year’s “HopeWords Writer’s Conference in Bluefield, West Virginia on March 24-25. This is a reasonably priced conference that I highly recommend. Check it out by clicking here.

11 Replies to “Lopez and Volf: How might we foster a better world?”