Things have been busy at my house as we are now showing it and trying to begin packing for our move to Virginia… But the busyness hasn’t kept me from sailing, as I crewed a boat up to Hilton Head on Friday and then on Saturday, we raced back to Skidaway (I’ll have to do a post on the long race with little wind, because we too first place in our class). I finished this book when in Virginia a few weeks ago. 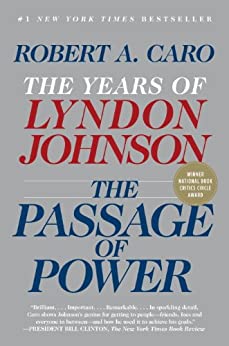 Robert A. Caro, The Years of Lyndon Johnson: The Passage of Power (New York: Alfred Knopf, 2012), 712 pages including notes and sources and 32 inserted pages of black and white photos.

This is the fourth volume in Caro’s massive study on Lyndon Johnson, and the third I’ve read. In this book, Caro begins with the run up to the 1960 Democrat Convention. It was assumed that 1960 would be the year Johnson would run for the President. With his leadership in the Senate, Johnson was a powerful man. But he kept giving off mixed signals as to his intentions to run and once he stepped into the race, he bet that no candidate could achieve a majority of the votes during the first round at the convention. In that case, many would switch to Johnson and he could capture the nomination.  Johnson was too late for Kennedy had wrapped up a majority of delegates.  As Caro has done in the other volumes, he provides mini-biographies of key players in the story including both John and Robert Kennedy.  After Kennedy was selected as the candidate, he chose Johnson as his Vice President candidate. Even this wasn’t without drama as there was a question whether or not Johnson would accept the position, as he’d be leaving the second most powerful position in the country with his leadership of the Senate. But Johnson, who wanted to be President since his childhood, accepts the position realizing he’s only a heartbeat away from the Oval Office. Caro, through extensive work, debunks the theory (that has been popularized by Robert Kennedy and his friends), that Kennedy’s invitation to Johnson was just a nice gesture and one that they assumed Johnson would decline. Robert Kennedy and LBJ would continue to have a running feud the rest of their lives. Caro makes a convincing case that without Johnson, who wasn’t as well liked in more liberal areas in the north, Kennedy would have never been able to win the presidency in 1960.

After the election, Johnson found himself sidelined. His feud with Robert Kennedy continued to grow. His advice on how to handle legislation in the Senate (something he understood) was ignored. As a result, Kennedy wasn’t able to achieve most of his agenda. Johnson, who was more hawkish, was even kept out of key meetings such as with the Cuban Missile Crisis. Compounding Johnson’s problems was the investigation into some of his supporters, especially Bobby Baker. This had the ability to cripple Johnson and perhaps even keep him off the ticket in 1964. Interestingly, Caro tells the story in a suspenseful manner as the hearings on Bobby Baker was running in Washington DC as the motorcade in which Kennedy was shot was driving through Dallas.

Upon the death of Kennedy, Johnson changed. He quickly assumed power. He knew what needed to be done to send the right signals to the rest of the world in to halt any mischief that the Soviets or the Cubans might stir up. Caro, who in previous volumes have been critical of Johnson and points out his flaws, has high praise of how he conducted himself through the end of 1963 and into 1964. Johnson was able to achieve Kennedy’s goal of a tax cut along with Civil Rights legislation. His handling of the segregationist Harry Byrd was masterful, as he presented a lean budget to win Byrd while working to keep him from blocking civil rights legislation. He was able to keep most of Kennedy’s staff and win their loyalty. While Johnson is often remembered for being mired down in Vietnam, Caro praises his ability to guide the country through this difficult time.  He also put his own stamp on the Presidency by showing foreign leaders a good time at his ranch in Texas.  In the spring of 1964, Johnson had the highest Presidential poll rating of any President.

Like Caro’s other books, The Passage of Power is a masterful volume that captures the complexity of the first President that I remember. I hope Caro will soon come out with his 5th volume, that looks at Johnson’s 1964 victory against Barry Goldwater and how his Presidency collapsed with the failures in Vietnam, leading up to his refusal to run for a second term in 1968. If you’re interested in history or in the complexity of powerful leaders, I recommend this book.

24 thoughts on “The Years of Lyndon Johnson (Volume 4)”