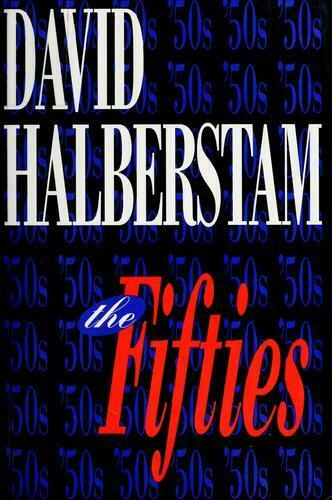 The decade was 70% completed when I was born. I have no recall of the 1950s, even though I was born late in the decade. Having now read this massive history, I now feel as if I lived through the decade.

Halberstam begins his story with Truman’s election of 1948, the Soviet test of a nuclear weapon in 1949, and the beginning of the Korean War in 1950. The short time the United States had as the leader of the world and the only nation with nuclear weapons had come to an end. We were beginning a new era, the Cold War. The uneasy situation with the Soviets would remain throughout the decade and Halberstam ends this book with the story of the U2 being shot down over Russia (which ended Eisenhower’s quest for a nuclear treaty) and the planning for the Bay of Pigs invasion of Cuba.

A lot happened in the 1950s and, as Halberstam points out, much of what occurred in the 60s had its roots in the 50s. From music to Vietnam, civil rights to foreign policies, the sexual revolution to television, space and science to the rise of suburbia, McCarthy to Kerouac, the 60s (and 70s) grew out of seeds planted in the 50s. Halberstam follows these developments through vignettes, stories of what was happening. In ways, the stories can stand alone, but taken together they paint a picture of vibrant decade that too often has been portrayed as sleepy.

Many of the people whom Halberstam writes about are well known and became even more famous in the 1960s (Richard Nixon, Hugh Hefner, Marlo Brando, Marlyn Monroe, Elvis Presley, Martin Luther King, among others). Others were less well known, but their ideas caught on as they developed fancy car designs, hotel and restaurant empires, housing tracks, and pushed America into a consumer culture. As I approached the end of the book, I was shocked to see one such individual that I knew personally. Kensinger Jones (pages 629-635) spent his retirement years on a farm south of Hastings, Michigan. He was a member of First Presbyterian Church in Hastings while I was pastor. Unfortunately, he was unable to be very active due to health issues, but I often visited with him and his wife Alice and enjoyed our conversations. Ken Jones was responsible for a series of Chevrolet ads that weren’t designed to “sell cars, but to sell dreams.” These ads were essentially a mini-story told visually as the consumer was encouraged to “See the U.S.A. in your Chevrolet.” While Ken certainly appreciated the power of the image, as Halberstam notes, he also appreciated the written word. After he could no longer attend church, he would read my sermons and often wrote notes of appreciation. And he was an author himself. I have two of his books on my shelf today.

Toward the end of Eisenhower’s presidency, there were those who suggested it was a shame there was the 23rd Amendment that kept a President from running for a third term. Eisenhower, whom it seems in Halberstam was never sure if he wanted to be President, would have nothing to do with such talk. He didn’t want a third term nor did he think anyone should be President over the age of 70. I wonder what Ike would think about our last election with both candidates over the 70 mark?

This is a wonderful book with many great stories. Even those who have no memories of the 1950s will find themselves entertained and will learn how this decade influenced future decades in America.

6 thoughts on “The Fifties”