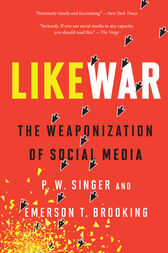 This timely book begins in 2009 with Donald Trump’s first tweet, promoting his appearance on David Letterman that evening. It then weaves various threads such as political operatives use of social media in the 2016 campaign, to celebrities who use Social Media to increase their fan base, and to social media’s reach onto the battlefield. Social media was used to ignite the “Arab Spring.” There were many who felt it held a promise to bring more democratic processes into autocratic countries. But the dictators who survived learned and soon, social media was being used by those on both sides, such as in Syria. Isis also learned to effectively use social media, not only to recruit followers but to terrorize the countries in which they operated. Isis captured the city of Mosul with much smaller army and one poorer equipped because the Iraqi forces were so scared of Isis’ inhumane acts toward their enemies which were splashed across social media. By the time Isis arrived in the backs of pickup trucks, the Iraqi garrison had fled. Today’s battlefield involves not just military tactics, but social media strategies. In some cases, enemy fighters taunt those on the other side on social media, making them feel more vulnerable. Not only is social media changing the way war is fought, it is changing the meaning of war.

Social media has quickly been adopted as a way for us to remain connected with friends and family, but it is also the place most Americans get their news. The authors spend significant time discussing the development of the internet and then the evolution of social media. As the various menus of media grows, so do those who attempt to use such media to sway our opinions. While Singer and Brooks extensively covers the Russia use of social media as a way for them to influence politics around the world, from the British Brexit vote to the American elections, they have also looked at how other countries have used social media for their own purposes. Truth and fact checking that used to be expected by the established news media is now out of the window. And because everything is based on algorithms that few understand, social media can be used to make the outlandish seems true (why else, would so many people like something is it wasn’t true).

Of course, it’s not all about “fake news.” Some countries want to limit the news their citizens receive.  China, in a way to only let its people know what the party wants them to know have created a firewall to control unwanted information which has led to humorous stories. When a study published under the title of “the Panama Papers,” which documented how many in the upper echelon of the party were stashing money overseas, Chinese firewall quickly blocked anyone from seeing anything that mentioned Panama. For a while, an entire country ceased to exist, at least according to the Chinese internet, under the internet police changed their blockage from anything Panama to “Panama” and other key words.

At the end of the book, the authors argue that social media companies (most of whom are U. S. based companies, need to be more responsible for how their technology is used.

In a perfect world, I would recommend this book, or something similar, to be read by every voter. But then, a perfect world wouldn’t have such issues with social media! 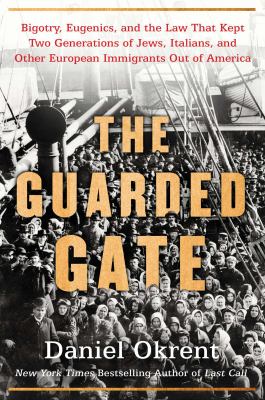 Daniel Okrent, The Guarded Gate: Bigotry, Eugenics, and the Law that Kept Tw o Generations of Jews, Italians, and Other European Immigrants Out of America (New York: Scribner’s, 2019), 478 pages including an index, bibliography, notes, along with several pages of black and white photos.

This is a difficult book, to read and to realize people thought this way. However, the message is important and the book is well researched which is why I gave it 4 stars on Goodreads. The author begins in the 19th Century and looks at how native born Northern European Americans saw themselves as the ideal race. Using science (especially drawing on Darwin’s theories), they debated how they might protect the race and even improve the race. This had profound impact across the society including non-voluntary sterilization in most states. But Okrent, while acknowledging these other implications, focuses his study of this “false science” on its influence in the immigration debate in the late 19th and early 20th centuries. The thrust of the book essential ends with the 1924 legislation that limited immigration at a percentage of those who ancestors came from counties as defined in the 1890 census.  After the passage of this act, which remained the law until 1965, the author only briefly notes how the American debate over race and eugenics was picked up by the Nazis in Germany.

Starting with leading American families from New England, there was a rising concern about what immigration was doing to America in the late 19th Century. Leading politicians like Boston’s Henry Cabot Lodge sough a restriction in immigration but ran up against obstacles. Literacy was one of the restrictions, but as schools began to be more popular in places like Italy, educational barriers were no longer effective at reducing the influx of new populations. Immigration kept the price of labor cheap, which meant that many business leaders wanted new immigrants. Steamship companies often brought empty ships to America in order to ship American products (especially timber) to Europe found immigration to a windfall to their business. Business leaders saw that the attempts to restrict immigration kept failing. In an attempt to boost their argument, many who were against the immigrants south to support their arguments with science. The proposed there was a danger of mixing American blood (Northern European) with the blood of those deemed less desirable.  It’s interesting (and frightening) how groups like the American Breeder’s Association, which had worked to improve agricultural practices such as raising healthier sheep, growing higher yielding soybeans and corn, and mildew-resistant cherries, began to debate at how to build a better “human.” Thankfully, these ideas never took a strong hold in the United States, but these ideas did catch on in Germany and even after the war, it was used as a German defense at the Nuremburg Trials, where Hitler’s “doctors” pointed to America as the source of their heinous ideas on race (see pages 392-393).

While there were many conservative and traditional politicians and business leaders drawn to such theories as a way of avoiding “racial suicide,” such as Henry Cabot Lodge and Henry Adams, this was not only an issue supported by conservatives. Those with more progressive views such as Madison Grant (of the Bronx Zoo Fame), Teddy Roosevelt and Eleanor Roosevelt also supported such views. Okrent follows the money and intellectual trail, as he links the support of such research, the scientist involved (such as Charles Davenport and Fairfield Osborn), the leading universities, and those funding such studies (which included Rockefeller, the Harriman family, and the Carnegie Institute. Also thrown into the mix includes Margaret Sanger, founder of Planned Parenthood and Samuel Gompers of American Labor fame.  In a way, the ideas that lead to the 1924 restrictive immigrant policies in America, drew support from leading thinkers across America. It is sobering to look back today and to see the flaws in their thinking. As Nazism began to rear its ugly head, most moved away from such theories.

Okrent notes how his own publisher (Scribner) supported such theories in the past. Madison Grant’s book, The Passing of the Great Race, and Lothrop Stoddard’s Rising Tide of Color against the White World, were both published by Scribner.

It would be nice to know such ideas that were popular in the United States in the early years of the 20th Century are no longer present as we move into the 21st Century, but I’m not so sure.  The recent debate over immigration and with a book like Pat Buchanan’s The Death of the West: How Dying Populations and Immigrant Invasions Imperil Our Culture and Civilization (2002), makes me wonder if there are still those who hold on to such ideas about race.

While Okrent mentions issues with Asian immigration, and early anti-Catholic immigration issues, this book primarily focuses on the attempt to limit immigration from Southern and Eastern Europe. I listened to this book via Audible, and then checked out the book from the library and read selections in preparation for a book group meeting where we were discussing this book.